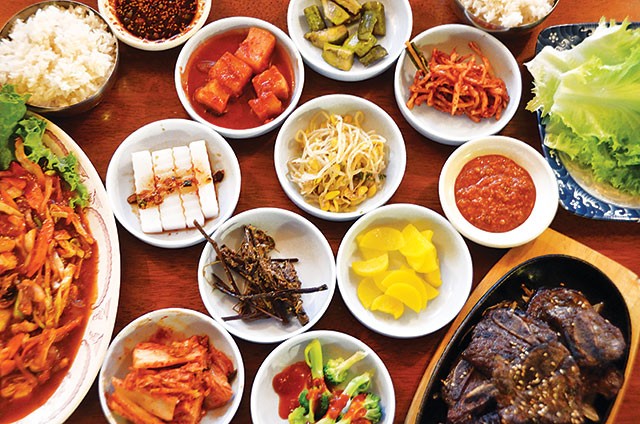 Perched on the side of the Austin Highway, just east of Salado Creek, is a relic from earlier times — a roadhouse serving homemade grub and cold drinks till 2 a.m. Arirang Korean Restaurant is no honky-tonk, but a Texan outpost of an older tradition. Along with almost 50 food items on the bilingual menu, Arirang serves beer and soju, a distilled rice beverage enjoyed in Korea since the 1300s, and does so with the quiet comforts of a traditional Korean tavern. Tables are partitioned in small rooms for privacy, and you won’t find trendy incursions like sushi on the menu. Instead, there are late-night specialties like pa jeon, little green onion pancakes stuffed with seafood, and Korean barbecue ribs, to pair with one or several carafes of Korea’s national spirit.

One may limit one’s soju consumption, or bypass alcohol intake altogether with glasses of refreshing, cold barley tea (try it), but be prepared to see your table engulfed in an ocean of plates. Before our main dishes arrived, 11 small plates of panchan, a sort of Korean amuse bouche, were laid out when the soju was poured. Kimchi, sweet potatoes, pickled seaweed, and cool gelatin bars made from chestnuts kept us occupied until the nak ji bokem, a spicy stir-fry with vegetables and octopus ($13.99) and Korean BBQ ribs ($16.99) arrived. Sliced thin with the bone in, the ribs were mildly spicy, as was the stir-fry. The octopus was well prepared, soft, not too chewy. Fried dumplings ($7.99), with a delicate thin crust filled with minced vegetables and pork made a mellow contrast to more robust tastes.

The portions at Arirang are generous. Though we itched to try more, the panchan dishes were replenished as we finished them, and the mains easily stuffed three hungry diners.

Another trip was dedicated to daytime comfort food, and many glasses of barley tea. Kong be ji, a hearty soup described as “bean curd dregs stew,” tasted more like a super-charged navy bean soup than a soy porridge (which technically, it was), perhaps due to the added meat stock. From the snack list, we ordered “steamed egg,” a deep dish intermediate between an omelet and custard, and broiled mackerel, skin-on and crunchy. The fish had a faint ocean smell, but mackerel is one of the oiliest swimmers out there, so that’s to be expected. What I didn’t expect was how wonderfully the three dishes worked together — good as breakfast tacos, frijoles, and potatoes, I swear.

I’ve got the boh ssam, marinated pork with steamed cabbage, in my sights for the next visit. And those little green onion pancakes, too. Whether they join soju or barley tea depends on the hour.