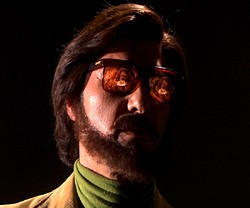 
Eight emerging artists born between 1970 and 1980 represent “the new Spain” in Spanish Young Art: The New Generation (on view through February 5). Credited with renovating Spain’s contemporary scene, the new generation experiments with a broad range of media and concepts. Chaos and defeat are explored in both María Cañas’ “La cosa nuestra,” a video collage based on the “cultural universe of the bull,” and Óscar Carrasco’s “Carabanchel,” a photographic study presenting an abandoned prison as a collaborative work-in-progress. On the flipside, “Democracy Rules,” a playful installation by Pablo Pérez Sanmartín, gives the exhibition a welcome dose of pop and junk culture. But if you only have time to look at one thing, head for Carles Congost’s 10-minute video, “La Mala Pintura.” Influenced by the “teenager universe,” Congost blurs the lines between telenovelas, music videos, and low-budget horror flicks, utilizing dark satire that might make you laugh out loud. At the reception, Blue Star LAB welcomes guests of honor Miguel Ángel Fernández de Mazarambroz Bernabeu, Consul General of Spain in Houston, and his Cultural Advisor, curator Tania Tapia Paz. Opening reception: free, 5:30-7:30pm, Blue Star LAB, 114 Broadway, (210) 227-6960, bluestarart.org.