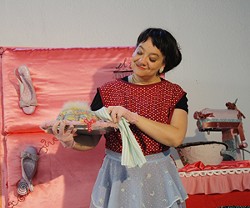 
The “happy home” of the 1950s gets reconstructed in Suchil Coffman-Guerra’s performance-based exhibit The Kitchen Goddess, which the SA native debuted in 2005 at Colorado’s Women’s Caucus for Art. For the 2011 version of her project, Coffman-Guerra collaborates with an array of “kitchen poets,” visual artist Rebecca Coffey (as a “secretly frustrated housewife” whose recipes typically include canned pineapple and cream of mushroom soup), and “The Magic Chef” (who’ll serve up an “edible installation”) in an interactive episode rooted in food, fabric, and ’50s-era femininity. Free, 5:30-8:30pm, Bihl Haus Arts, 2803 Fredericksburg Rd., (210) 383-9723, bihlhausarts.org, retrokitchengoddess.blogspot.com.