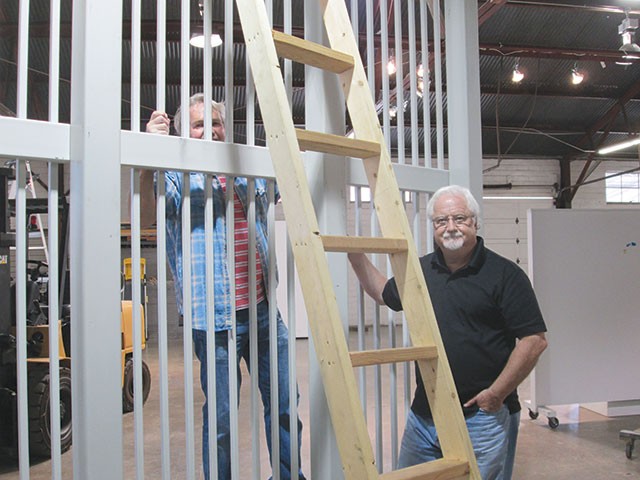 Bill FitzGibbons is certainly one of San Antonio’s high-profile art icons: public artist, curator, Fulbright Scholar, world traveler, head of sculpture departments, art activist and former director of Blue Star Contemporary Art Museum. Since leaving his post at Blue Star last year, Bill has been on a tear, lighting underpasses and doing public and private art commissions all over the country. And showing at the National Gallery in New Delhi. And creating a performance dance/installation called Right Side, Wrong Side, which will be presented at Lawndale Art Center in Houston on September 11. Bill was just given a prestigious CODAaward in the transportation category. I caught up with Bill at his studio in the Lone Star Arts District, where we, being two Irishmen, told stories and swapped gossip for an hour before we even got to the actual interview.

What’s the first piece of art that had an impact on you?

I don’t have a single piece of art that had an impact on me, but when I first started studying art the Russian Constructivists had a significant impact—their philosophy and their sculpture.

Describe the state of sculpture today.

Today sculpture embraces many mediums and approaches to three dimensions—from objects to installation to new digital media to even conceptual work.

If you could own any piece of art, what would it be?

A major work by Joseph Beuys—probably one of his felt suits.

Shortly after I’d met you, you told me you’d move back to Alaska in a minute. Do you still feel that way? What’s the attraction to Alaska?

Alaska is a vast and spiritual place and had a profound effect on my thinking of visual art. I would love to go back to Alaska for short periods, but not to live.

Name a couple of the most memorable Blue Star shows under your direction.

I have several “most memorable” exhibitions out of the hundreds that occurred during the 11 years I was there: the “Mexican Report” (the largest contemporary Mexican art exhibit shown in the U.S.), “Frozen Music” (featuring over 50 San Antonio architects), “San Antonio Painters” and the solo exhibition of Gary Sweeney!

That goes without saying, of course. Thanks. Why do you think the art world is obsessed with youth and freshness over experience and maturity?

I think that the combination of the internet and culture’s expectation of new ideas coming from the next generation sometimes trumps experience and maturity—but certainly not always.

Name three things about you that are stereotypically Irish.

Love of gab, love of drink and love of Celtic culture.

Who’s the most interesting person you’ve ever met?

That’s easy: I interviewed Buckminster Fuller in Memphis right before he gave a talk and his speech was one of the most mesmerizing experiences I’ve ever had. Number two would be Jimi Hendrix, who I also interviewed in Memphis in about 1969.

What’s the best advice you can give to younger artists?

My best advice to a younger artist is to seek out an artist that is important and has influenced them and is a big success in the art world. Introduce yourself and try your hardest to work for them for a couple of years—even if it means working for minimum wages. The education you get from this experience will be better than anything you learn in school.

How do you think you’ve changed with age?

Once I hit my early 50s, I realized that my life ahead of me was shorter than the life that I had lived. This had a profound effect on priorities in my life. Family, friends, good health and following one’s bliss quickly floated to the top tier of “what’s important.” Giving to others became more important than getting what you can. Many things that once seemed important, or caused stress and/or anger, simply were not important any more.