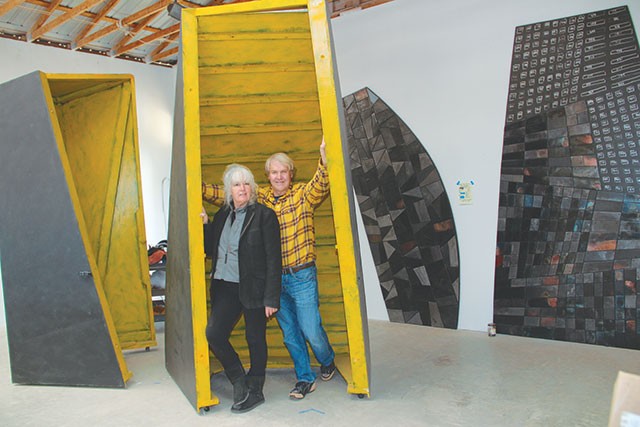 If I ever found myself teaching an art class, I would pack up my students and drive them to Wimberley, where I would give them a tour of Catherine Lee’s studio.

“This,” I would explain to them, “is what it takes to be a serious, successful artist.

Catherine Lee is a bona fide art star. Her work has been exhibited all over the world. She’s in all the major museum collections. She lived in New York during the most exciting, crazy art times. I hope she writes a book on her life. She is currently showing her vast talents in sculpture, painting and ceramics at Blue Star Contemporary Art Museum in an extensive overview of her work, on display until November 9. Stop reading right now and go see it.

What was your first experience with art?

I was at elementary school on an army base in Germany, around the third grade I believe, and they took some of us to a local museum of art in Kaiserslautern. There were some really old paintings there, in gaudy gold frames, up and down hushed halls. Amazing! But the sense of the place was unlike anything I’d experienced in real life. I mean you do know, when you’re nine, that there are museums in the world, just like you know that there are boiler rooms in ships or operating theaters in hospitals, but until you have the actual experience, it’s just a partially imagined mental space. I was stunned by the sense of quiet, of reverence, with so many people there just to look at art, and so many more tending to the preservation of those artworks. I thought even then, there is something important going on here!

Did you have a role model or mentor when you arrived in New York?

Not in the way you mean. No one took me under their wing or showed me the New York ropes—that would be so not New York! But I was there with my boyfriend, later husband, Sean Scully. We kept up a constant and very intense dialogue for many, many years, and so we looked after each other, aesthetically speaking.

What was New York like during the heyday of the art scene there?

I think that heyday has been going on for decades, hasn’t it? I was there for 32 years. Early on it was sort of fun but slog work, both. My first 15 years in New York were all about a succession of day jobs, and trying to keep a good studio in place for us.

The irony, of course, is that if you spend all your time doing that then you end up with never enough time inside the damn thing, making art. It was terribly frustrating. Most artists are spending the greater part of their time in the city just trying to earn enough money to pay the rent, to stay in New York. It’s a shame that there isn’t more support for our artists that way.

Who do you think was the most underrated artist during that time?

If you had to choose only one media, what would it be?

The feminist art movement was starting to gain steam when I was in college, but it seems we’re still a very long way from parity. What’s it going to take?

It’ll take a lot of work at consciousness raising! There’s a tremendous imbalance, and it’s an imbalance that’s part of a larger order of magnitude of skewed representation of women in society—all the way from politics to the arts and sciences. It’s by now common knowledge that every discipline and every vocation is slanted in favor of men being supported above women. I see, and have seen, this every day, my whole career. That said, I feel that I’ve been very lucky. At least I’ve gotten some recognition, some support from galleries, curators, etc., and yet, I have to say, I’ve seen dozens and dozens of deeply marginal-at-best male artists get picked up and supported as though they are cultural warriors! Women? Not so much to practically never.

Maybe this is related to the last question, but I can’t help feeling the world of high art has devolved into a clownish, commodity-driven brand circus. How do you think that happened?

Money. It’s always about the money. Until recently, art had a special place that was really independent of the mainstream marketplace. Now, sadly art is too often just a commodity that allows the wealthy to park their money. But this vein of the art world does nothing to contribute to the true value and furtherance of actual art. Fortunately, real art it is still being made! But that’s not necessarily what’s being bought and sold. Time will sort all that.

Is there a time in your life that you would lock into forever if you could?

Oh yes, those years just after my son was born.

What is it about dogs that we love so much?

Their trusting spirit, their ability to love unconditionally.

Name three things your friends would be surprised to learn.

That if you fire a bullet from a gun, level with the earth, and at the same exact second just drop one from that same exact height, both will reach the ground at the same time—it’s physics fact. That I won a national karate championship in ’89 at Madison Square Garden in New York, in women’s black belt kata. That sleep and art are the two great healers.

Do you think your international audiences view your art differently than American audiences? If so, how?

Yes, there is a deeper understanding of non-objective art in many of the old countries. There is truly a broad-based cultural appreciation of the relevance of abstraction in Europe, for instance, that really doesn’t exist here.

Who’s the most interesting person you’ve ever met?