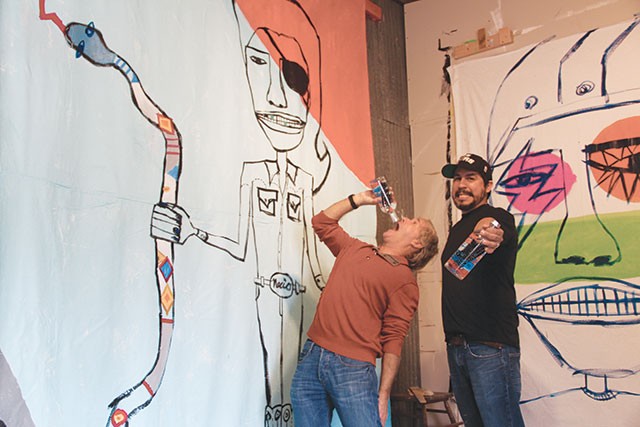 Cruz Ortiz is known by many as the art teacher at Lee High School, a job he has held for the past 10 years. To the San Antonio art scene, however, he's a wild and outrageous presence whose intercultural word pieces (Soy un Boring Lover) have entertained us since his breakout Artpace residency in 2005. And his art career, these days, is on fire. He was recently commissioned to design an Absolut Vodka bottle; an honor bestowed on only a select few. He also installed one of his signature comic figure environments for a music venue at SXSW in Austin last month. He's a busy guy. We talked with him at his Southtown "compound," which includes several studios and an old railroad station.

Was there a particular moment when you decided you wanted to be an artist?

Yep—when I was five years old at Holy Name in Houston; we did a really cool project where we melted crayons to make these cool drawings on fabric. I made a pillowcase—after that I was sold.

Would you consider your work in the family of Outsider Art?

Outsider Art—that’s funny—seems like a trap the Insider Art people came up with.

How would you describe your work? Are there themes running through it?

My attention span doesn’t allow me to be nailed down to a certain type of art—I think I might be a scientist—just researching and coming up with solutions to problems.

What do you consider to be your biggest strength as an artist?

Who have been your biggest influences?

I have a really long list of influences; in fact the list gets shifted around a bit, depending on where I’m at in my life or what the tasks are gnawing at my ankles. So Joseph Beuys, The Smiths, Helen Frankenthaler, José Guadalupe Posada, Richard Tuttle, Sue Coe, Esteban Jordan, Ana Mendieta, Félix González-Torres, love the stuff Santiago Sierra does, Mexican sign painters, Fugazi, Rodchenko, Sunny Ozuna and the Sunliners, Alice Neel and, of course, George Strait.

A few times I’ve made artwork that I’ve deliberately wanted to look raw and unfiltered and I found it was an effort to keep it from looking polished. Do you ever find yourself having to dial back your efforts to keep it looking fresh?

I don’t think about that too much. There have been times that things look too clean, but it wasn’t that I needed to make it more raw or unfiltered. It just meant maybe I should think about what I really want to convey, so then I go at it again and then it ends up looking raw. I concentrate on more of the immediacy of my work. I want to convey a sense of urgency; there’s a lot of work to be done.

How were you approached to design an Absolut Vodka bottle?

It’s been a really interesting process. A design agency, Guerilla Suit, called me up and said that they had been approached by Absolut to produce a new bottle for their city series—but this one was for the entire state of Texas. So GS essentially put together a bunch of Texas-based artists on some fake bottles and the folks at Absolut gravitated towards mine.

Were there particular guidelines you followed?

Well, it took about a year and half (and by the way I had to keep my big mouth shut about the whole project, which, if you know me, was super difficult) but I essentially produced a huge body of gouache and watercolor paintings that they went through; and after a bunch of design hurdles, we ended up combining a couple of those works to create the final bottle design.

How did you arrive at the final design?

Well at the beginning of the conceptual development—we talked a lot [about] what Texas was and is today—I immediately thought of growing up in Houston watching rockets fly out into space and eating cereal and Tang; thinking, “holy smokes, Batman, humans are in space.” So that was the start of the basic feel for the design: inter-connective and super-cosmic Texas. The designs in the back of the bottle are from landscape paintings from Marfa trips and the boot is my rendition of Steve Jordan’s cosmic caballero space boots.

What is it about your artwork that makes it uniquely “San Antonio?”

San Antonio is so rich in culture. This place influences great writers and artists; there is so much here that people travel and even move here from everywhere just to experience a genuine authentic and sincere life. I just try my best to research and document; then, of course, reflect on my findings.

I think there’s this growing pride and respect happening throughout the city. I did say growing because it’s not all green grass yet. But there is a steady surge in: urban renewal, human and animal health, integral fine arts development into city planning, awareness building of sensitivity towards older neighborhoods, infusions of technology in the ghettos, access to higher education, expansions of those higher learning institutions, basic human rights to live without bullying judgments, research-based infrastructure strategies. Sounds crazy, but we’ve got nice lil’ city here. Of course it takes a lot of work—gotta work, folks!

How did the Dignowity [Pushcart] Derby come about?

Haha, well at the time I was living on the East Side, which was an amazing side of the city with a beautiful legacy that fell to neglect and urban decay. Anyway, we went to the neighborhood association meeting, which at the time was a membership of, like, six hardworking folks. Anyway, I had a crazy idea that would counter all the neighborhood complaining. I stood up and said that I wanted to put on a pushcart derby, like The Little Rascals-style, in the crack-head park down the street, Dignowity Park. They all laughed at me and said I was crazy. So I got a dozen of San Antonio’s crazy artists, built some carts and we had the derby. Now it’s, like, years old, has a large number of participants, and community folks that come together; the park is all cleaned up, some pretty little plants, couple nice trees, even has a new park for the kiddos—pretty nice project. The lesson here is: Artists are economic generators. It’s an old model, but it works.

Some artists find they do their best work under a slightly altered state. Does that apply to you?

I think this is a strange question—and I know where it’s going—but I don’t do that. In fact, I’m usually under a deadline, or a strong drive to get a project done. It’s like Dalí said: “I don’t do drugs—I am drugs.”

What’s the best piece of advice you give your students?

Jeez, that’s like a four-year course. I always tell the kids the basics: 1) Come up with your Empire Plan. 2) Work hard till it hurts. 3) Fall in love, but then pay attention during heartbreak. 4) Travel. 5) Exchange information. 6) You are from a family—don’t forget. 7) Start a band, but then breakup the band. 8) Document, document, document. 9) Love will find you—just pay attention. 10) Go Spurs go!

If you could own one piece of art, what would it be?

It’s a toss up: The Starry Night and Les Demoiselles d'Avignon. Seen them both; I just go numb. There’s a real reason why they are on coffee mugs.

You’re represented by David Shelton in Houston; we miss him terribly here in San Antonio. If you had the power, is there anything you would change about the gallery system?

Galleries are cool. It’s about the art; and artist just needs [to] work hard. The gallery system has completely changed, so rules are always up in the air. I think if anything needs some attention [it’s] the cultivation of serious collectors. There has to be a strong collector base in every city for a city to keep its artists in place. If you don’t, they all move to New York. And that’s cool, but they just don’t have tacos like they do here in San Antonio.