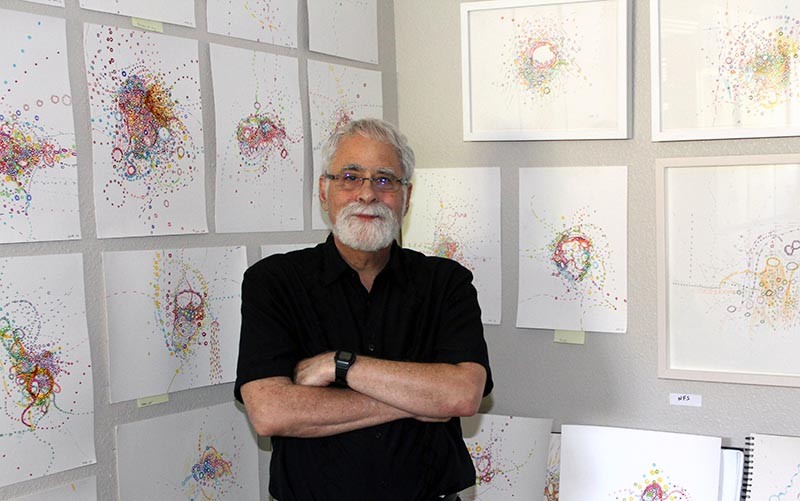 I first met David Rubin when he was Director of 20th Century Art at the Phoenix Art Museum, and I was doing a project for the Phoenix Airport. Little did I know that in 2006, after a stint at the Contemporary Arts Center in New Orleans, this bundle of energy would come to the San Antonio Museum of Art and completely transform the sleepy museum into an active, vital and relevant force in the local art scene. He not only paid attention to the city's artists, his Artist Talks introduced the public to local and national artists, his social events brought non-art types into the museum, and through the force of his own enthusiasm, he became the institution's head cheerleader.

David left SAMA last year, and has kept himself busy writing and curating. He currently writes for Glasstire, the premier online art magazine, and for Visual Art Source. He's also curating an exhibit at Bihl Haus Arts that will open in May. It features 15 San Antonio artists and it's titled, "Nature on the Edge: Mutation and Hybridity in 20th Century Art."

As if that wasn't enough, David had a solo show at the Blue Star Contemporary Art Museum in 2006 and he continues to make and show his own artwork nationally and internationally.

What was your first art experience?

I grew up in the San Fernando Valley of Los Angeles and my family was not particularly arts oriented. And I am a Baby Boomer, which makes me part of the first TV generation. So, when I was about 11 years old, I drew a portrait of my mother while sitting next to her, watching TV. It resembled her, so everyone was impressed. In high school I took two studio art courses, but got turned off by a terrible teacher in the second semester. She just let the students goof off. I do remember that Cindy Williams of Laverne and Shirley fame was in that class. Also, I remember making lanyards during summer camp at the Lazy "J" Ranch in Canoga Park.

How would you assess the current state of art in San Antonio?

Right now I think we are in a weird transitional phase, since so many of us have recently left our posts. I've been here for over eight years now, and what keeps holding my interest most are the artist-run spaces. They do come and go, but I've discovered so many fabulous artists through the DIY system. I wish these spaces were better promoted by the city, because they are run by artists and it's the artists who are the collective soul of the city.

How would you explain the role of the curator to someone outside the art world?

There are many kinds of curators and many different roles that they can play. As a contemporary art curator (and I've also worked with modern art), I have a real commitment to supporting living artists in any way I can. I attribute this in part to the fact that I studied the relationship between the museum and the living artist when I attended grad school at Harvard. My instructor, the late Daniel Robbins, suggested I investigate "The Irascible 18"—the group of abstract expressionist artists who picketed the Metropolitan Museum of Art in the early '50s for not showing their art, which was the avant garde at the time and of course is now part of art history. When I started meeting artists of my generation while teaching and serving as assistant gallery director at Scripps College in the late '70s, I had a revelation. They were every bit as good as the artists I had studied and was teaching about. So, by the early '80s it was clear to me that I wanted to work for the living artist, as opposed to dead ones.

I used to view curators in the role of public service. Have museums sort of changed that?

I think most museums still consider what is called "education and outreach" and "visitor engagement" to be very important. In my opinion, there are excellent curators and there are terrible ones. The excellent ones care about spreading the mantra about how wonderful art experiences can be, about what we can learn from art and how it enriches our lives. So although we know there are a lot of negative things one can say about museum politics and such, I still believe that there are many hardworking and competent curators who believe in spreading the word. Technology and social media are providing all sorts of new ways to do this.

What are three of the most successful exhibits in your illustrious career?

"It's Only Rock and Roll: Rock and Roll Currents in Contemporary Art" was my longest running show. It traveled to 13 venues, from 1995 to '98. It was the first show to survey the impact of rock culture on the visual arts, and it was accompanied by my first major book, published by Prestel. "Old Glory: The American Flag in Contemporary Art" opened in 1994 at what is now MOCA Cleveland, where I was Chief Curator. It followed me to the Phoenix Art Museum, where I became Curator of 20th Century Art in late 1994. The show was a 40-year survey of how artists have used the image of the American flag, or the flag itself, in their art. In Cleveland I won an award for the show from Northern Ohio LIVE magazine. But when the show hit Phoenix in 1996, it drew the attention of the American Legion and stirred up a two-month long media circus, including being the closing segment on NBC Nightly News with Tom Brokaw. It also attracted 50,000 visitors to the museum. Mind you, it was not an in-your-face exhibition ... it was an historical survey that included a few provocative works that were part of a broader history. And, of course, "Psychedelic: Optical and Visionary Art since the 1960s" gave me another milestone moment. The show was inspired by SAMA's Frank Stella painting, Double Scramble, which was painted in 1968, at the height of the psychedelic era. The project generated my most successful book. When Ken Johnson recommended the book in The New York Times holiday gift guide, I knew I could die a happy man.

How would you describe your own artwork?

I practice automatic drawing, which I studied from an art historical perspective in grad school. As part of my research, I interviewed the surrealist artist Gordon Onslow Ford, and even visited his studio twice. He believed that the circle, line and dot are the fastest forms one can draw, and thus the most purely automatic. In my work, I use a pictorial vocabulary that developed while I was living in New Orleans—mostly circles and lines, with the circles having been influenced by Mardi Gras beads. I work with color pens and love to draw on watercolor paper because it is nicely textured. I start somewhere on the page, randomly, and work spontaneously and quickly while I build up a configuration. I view the resultant abstractions as being sections of the larger universe, much like the surrealist [Roberto] Matta and the great abstract painter Al Held did. I had the privilege of meeting both artists and Held actually encouraged me to keep drawing when I showed him my sketchbook. I also see the circles as being related to atoms and molecules, and the gemlike aesthetic of the work as connected to divinity. According to the Kabbalah, divinity exists in everything.

If you could own any work of art, what would it be?

A Wallace Berman Verifax collage. I had a transcendent experience when I first saw one around 1980. In the 1960s and '70s, Berman used an obsolete photocopying machine to transfer photographic images to paper, and he could do negatives as well as positives. He organized emblematic images about all aspects of life into a grid, and the negatives produced images that have an X-ray quality that reminded me of the light in Rothko's paintings. In any case, I looked at the Berman, drifted off into space, and returned to say to myself, "Oh I get it, this is our universe, these are our options." I also love the way Berman's Verifax works foreshadow the computer desktop.

What advice would you give to art students today?

Be truthful when you make your art. It is a reflection of yourself, so be honest about who you are and what you believe. Also, consider audience. While the art is about you, you need to connect with the viewer. Otherwise, no one but you can benefit from the work.

I've known you since you arrived here, yet I know almost nothing about you outside the art world. Tell me three things about yourself that I don't know.

I grew up glued to my transistor radio and used to go to sleep with music playing under my pillow. I have had many wonderful serendipities in my life. The best one is probably that I met my favorite singer, Jennifer Warnes, and we have been close friends for many years. I got to photograph her for her website (my photos are on the main page and news page; they were hand-colored by an artist friend of hers). I have had three cats and the third one is still with me. Apollonia was left in my French Quarter condo by my cat sitter after Katrina and was heroically rescued nine days later by the artist Blake Boyd. She is about to turn 19, so I'm learning how to care for a geriatric cat, and doing my best to keep her happy and healthy.

If you could change the museum system, what would you do?

Too many museums have gotten away from the real mission. It's about the art. As I said earlier: Make it accessible and understood, keep it real.

Simon Doonan says the art world has become, "a vapid hell-hole of investment-crazed pretentiousness," which, amazingly, has also been used to describe me. Are you optimistic about the future of art?

I've always been an optimist, so it would be hard for me to give a negative outlook. In any case, artists will continue to make art and I'm afraid the few that become the superstars will continue to be the ones with the big bucks. Nevertheless, the art isn't going anywhere and as long as those of us who believe in it and love it continue to exhibit it and write about it, life will go on. What is changing most, of course, is that the internet and social media have reshaped the way we experience the art. And this is a good thing. Because of advances in technology, art is now reaching greater numbers of people.