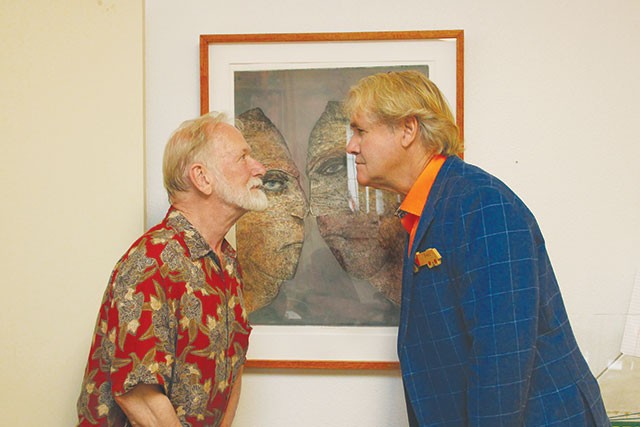 San Antonio artist Dennis Olsen has recently ended an amazing 33-year career teaching at University of Texas—San Antonio. A native of St. Louis, Mo., his charmed life has enabled him and his wife Meredith Dean to travel and exhibit their work all over the world. After discovering printmaking at University of California—Los Angeles, Dennis spent a year in Madrid on a Fulbright Scholarship and ended up staying in Europe during the political turmoil taking place in the U.S. in the late 1960s. After falling in love with Florence, Italy, Dennis established the Santa Reparata Graphic Art Centre (now the Santa Reparata International School of Art) in 1970, where he and Meredith spend their off-season.

Since being diagnosed two years ago with a life-threatening illness, Dennis has been on a tear—working feverishly on a body of monoprints and etchings at a pace that would flatten the average printmaking grad student. These are some of the most amazingly complex prints I’ve ever seen, and every time I visit his studio, he shows me yet another process he’s just invented.

As with most of the artists I’ve interviewed, Dennis is also a ridiculously talented musician—a friend told me he “knows all the chords on the guitar.” As if that’s not enough, his hidden talent is that he’s a world-class whistler. (I’m not sure if they even have a “world-class” for whistlers, but he’s the best I’ve ever seen.)

Dennis is currently showing his “Flash Fiction” prints, along with Meredith Dean’s “Polarities” at REM Gallery.

Did you grow up in an artistic household? What was your first experience with art?

No, I didn’t. I was at the St. Louis Museum of Art as a teenager, and I saw a small Ben Shawn painting of a man with a peg leg walking up a red staircase. His work made a huge impression on me at the time, and it’s a shame that Ben Shawn has been all but forgotten today.

You went to UCLA to study with legendary printmaker John Paul Jones, who was later at UC-Irvine when I was there. What was so good about him as a printmaker?

His etchings were lush, and he had an amazing way of putting aquatint over soft-ground, and then scraping back the layers and getting beautiful results. Later on, he did those dark, moody portraits he’s famous for.

What is it that draws you to printmaking?

There’s a lot of craft involved, and I love working with a lot of tools. Printmaking allows you to invent your own way of working; artists are always inventing new processes and techniques with print. I am, however, not the most devoted printer: I love making the first print, but I almost never run complete editions. That’s probably why I make a lot of monoprints.

You were in Europe in the late ’60s, during some turbulent times. It seems to me that there’s a generation of youth that has no idea a cultural revolution took place. Do you think that the changes that were brought about had a lasting impact?

The reason I stayed in Florence in 1968 was that I was traumatized by the political turmoil back here in the States. The Vietnam War, Kennedy and King were killed, there were race riots—and there was a revolution in France that made a huge change in Europe. I was glad to stay there.

Along with this impressive outpouring of artwork you’re currently engaged in, you’ve also found time to organize and document your life’s work. Have there been any discoveries or surprises in that process?

Yes, but it’s natural to do that. And it’s certainly preferable to ending a series before its completion.

Yes, I suppose so.

If you had to choose between doing art and making music, what would you decide?

Well, I did decide. I was in California, and my friend and music partner Steve Gillette went to Europe and came back with some success, and I decided that my artwork was more important. I want to point out that the question of being able to make a living doing these things never entered into it in those days.

You and Meredith split your time between San Antonio and Florence, Italy. What’s the biggest difference you find living in the two countries?

Well, I can tell you why I moved back here (San Antonio): Life can be difficult for a foreigner, bureaucratically. For instance, we weren’t allowed to buy a car (!), we had to have a friend buy one for us. On the other side, Europeans have a saying: “We don’t live to work, we work to live.” They can teach us a lot about enjoying life.

Name three decisions you’ve made that changed the course of your life.

In 1962, I moved to Spain for 18 months and went to school at the University of Spain. That began my love of Europe, and I later went to Florence as a Fulbright scholar. And then I decided to stay there, and I opened Santa Reparata Art School in 1970. The third event was meeting my wife Meredith, in 1981.

I ask this of everyone I interview who teaches art: What’s the most important advice you give your students?

You need to keep producing without waiting for inspiration. You have to work every day, as if it’s a job, and you have to keep at it. Also, you can’t be afraid to fail. You need to try new, radically different things without fear of failure. Also, you need to mast.

How would you sum up your life so far?

I think about that a lot, of course, because of my health issues. I think that I’ve had a very rich and productive life. Not to sound like Frank Sinatra, but I think I did it my own way. Aside from Santa Reparata Art School, we bought and restored a 14th-century Tuscan village out in the country. I’m currently writing a book about the restoration. I’ve had a rich musical life, even though I never did it professionally. I’ve been able to make a living making and teaching art. I’m surrounded by the love of my wife, children and grandchild. I think I’ve had a very good life!