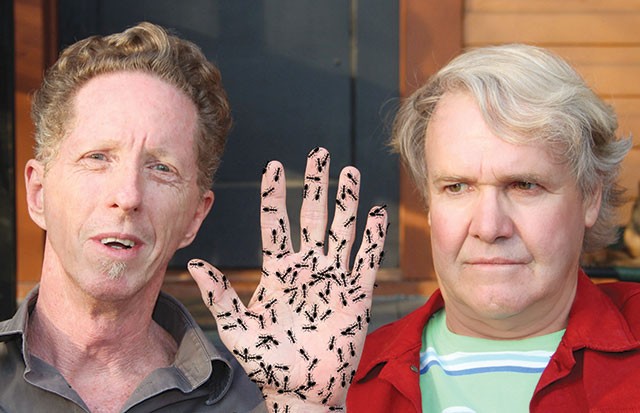 I can never get enough of James Cobb’s artwork. He’s yet another local artist whose work is extremely smart, complex and underappreciated. At a stage in his life where many artists are happy to coast along, James continues to explore and expand his work, and his recent experiments with printmaking from files are drop-dead gorgeous. His work is that rare and refreshing combination of intelligence and craftsmanship.

I’m not a big believer in cosmic coincidences, but while interviewing James, I was struck by some eerie parallels in our lives (cue The Twilight Zone music): We both grew up drawing Big Daddy Roth and Murph the Surf cartoons. We were both heavily involved in the Mail Art movement of the ’70s. His brother is a surfing buddy of my best friend from college. I was in Eugene, Ore., the summer he moved there. In the first exhibit I was in with him, at the old Wong Spot, we both showed paintings featuring tattoo images.

I caught up with him at his home studio.

Most of the artists I’ve interviewed set a course toward a career in art at an early age, then focused on a calculated path towards that goal. You seem to have sort of drifted into an art career rather late in life. How’d that happen?

Yes, drifted. Although I loved to draw, and did so constantly growing up, I had no real awareness of art beyond the likes of Big Daddy Roth, Murph the Surf and the rock posters of the Fillmore and Avalon Ballrooms. It was the rock poster art I aspired to create—work that cobbled together music, general weirdness and deviance, with some social commentary. A heady mix.

I was introduced to a much broader overview of art, history, practice and possibilities through my wife, Rhoda, who I met as Rhoda Mappo in Eugene, Ore., in the late ’70s. She was an active artist who, at the time, was deeply immersed in Mail Art. I leapt right into it and spent much of the next decade networking, collaborating, exhibiting and eventually world-traveling to meet a number of fellow Mail Artists. I eventually entered into an art “career” as an experiment, basically, to see if there was any potential for a compromise-free marriage between my drive to work visually and income generation.

Were there one or two decisions you made that completely changed the course of your life?

Floating along seemed just fine. Remember, you and I came of age in a time of substantial economic security. I didn’t have much fear of unemployment—didn’t have much fear, period. I think there have been a few decisions that changed the course of my life. Going to technical school and studying drafting and then working as a draftsman was an important skill set and experience for me. Involving myself in a very iconoclastic aspect of the art world, Mail Art, was a major turning point. Another decision that proved important was moving  to Texas. I began my art “career” experiment here in San Antonio without any clue that Texas was one of the better places to be conducting that experiment. Though the art scene in Texas seemed straighter, the gallery scene was where it was at. With a number of large cities and a decent collector base, Texas was a happy accident for me.

During the ’80s, your paintings were selling like hotcakes, and it seems just as your career was about to hit a new level, you stepped back from it. Why?

Well ... I did begin a bit of a concerted effort to try and facilitate that “new level” with mailings to institutions, connections, etc. At the same time, I was becoming disinterested in the cycle I was in of painting and showing. I felt that there was something missing. I was getting some rejections. I’m not set back by rejection too seriously. It comes with the territory. In fact, I’ve always had the sense of being an outsider in all art career transactions, and so acceptance—though in the aggregate I’ve been very fortunate—has always seemed a pleasant surprise. It was just that at some point during this push, I was struck by a palpable distaste of the effort. I saw that it was sapping joy directly from the activity—the making of visual images, the immersion in a language—that I felt incredibly lucky to have discovered. I felt it was important to examine my motives, and although I could nominally make a case for wanting to reach a wider audience (or make more money) I realized I was being compelled, ultimately, by ego, and there was an odd aspect of unquestioning adherence to a career momentum that felt strongly like “selling out” for the first time. It suddenly felt like the wrong direction to follow. I decided I needed to regroup and find the joy. I stepped away and moved into music.

Did your music sidetrack you?

Pseudo-Buddha was a very popular band in San Antonio’s art scene, and your music has been included in some impressive compilation CDs. So many of San Antonio’s visual artists are also ridiculously good musicians, I was wondering if making music stimulates a different area of the brain, or if it’s just another way of releasing creativity. What do you think?

I approach making music and making visual art with the same mindset. It feels all the same, creatively, to me. In my case, I’ve either worked on solo projects or in collaboration with groups that were essentially committed to improvisation. Each performance was a new piece with real-time creative problem solving and collaboration. The process of music and visual art might personally feel less alike if I were more involved with groups that repeated pieces more often (ever) or especially groups that have a well-rehearsed set list.

If you had to choose between making music and making art, which would you choose?

Wow. What a lousy choice. OK, if I had to chose between the making of art and the making of music I would choose to continue to make art. I’m not entirely sure I could actually quit making visual images, but I find it relatively easy to not play music. However, if I had to choose between viewing visual art (the static sort … not film, right?) and listening to music, I’d probably let the art go.

In addition to your paintings, you’re designing amazingly complex prints on the computer. I’m a proud owner of one, and I can look at it for hours.  (Note to readers: Check them out. And then buy one.) Your paintings have a lot of gestural brushstrokes, where the objects move and blur, like a Francis Bacon painting. Your computer prints, on the other hand, are static and clean, as if they were designed by an engineer. Was this a conscious decision?

Yeah, working digitally has enabled me to reconnect with that love of precision that led me into drafting. I’ve been enjoying creating schemata-like, somewhat rhizomatic (as a friend described it) imagery on the computer. Diagrams and exploded views of something. Just now it’s very satisfying. I’m certainly not in love with sitting in front of a screen for hours on end, but the image creation process, aside from that, is incredible. Currently, I’m printing on different materials to ascertain what gives me an object with the most personal appeal. I’m prone to this precision approach when I draw as well, but with paint I get seduced by the visceral possibilities, get well into the push and pull of it, am consistently feeling the urge to finger paint and so, generally, the work has a very different feel.

The art business seems out of whack. If you could change the gallery system, how would you do it?

I don’t think it’s possible for the business of art to be anything other than out of whack. It’s an unholy coupling, but there are ample opportunities to find like minds within that system. I’m not concerned that the system be changed so much as emphasizing the fact that the gallery system isn’t the only game, and doesn’t actually hold the keys to the kingdom.