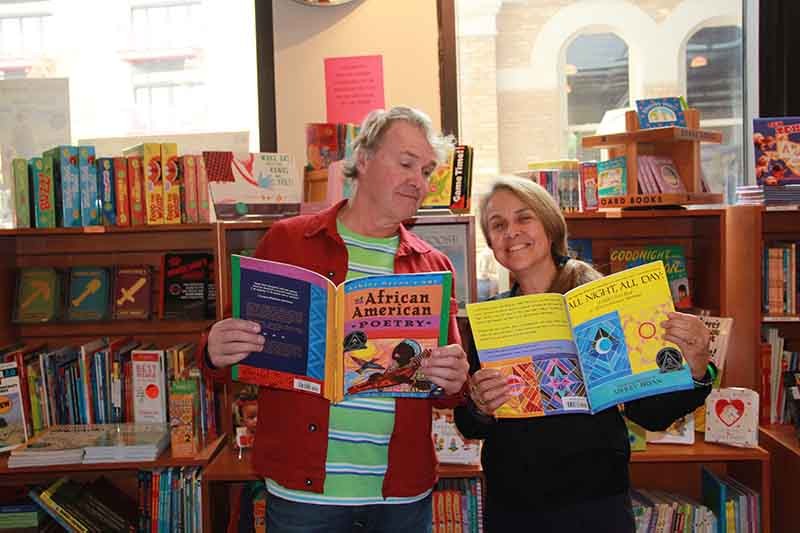 Have you ever had a conversation with someone who was so smart and fascinating that, a short time later, you glance at your watch, and two hours have gone by in the blink of an eye? That's how my interview went with writer Naomi Nye.

Naomi Nye is the Crown Jewel of the San Antonio literary world, and she will be very upset with me when she reads that. She won't allow me to list her many literary awards and achievements, but I will tell you she's published 35 books, written countless articles and essays, and teaches at the Michener Center for Writing at the University of Texas at Austin, one of the best Masters of Fine Arts programs in the world.

Naomi arrived in San Antonio after a fairly nomadic life. She grew up in Ferguson, Missouri, and spent her high-school years in Palestine, fleeing back to the U.S. just before the Six-Day War.

We spoke over snacks downtown, near the 100-year-old house she shares with her husband, the accomplished photographer Michael Nye, and their son Madison.

Was there a moment when you knew you wanted to be a writer?

Yes. I wrote my first poem when I was six years old. It was a simple four lines, so compact. I wrote it in large printed letters on a paper laundry bag in a Chicago hotel room, walked away, came back and it was still there!  That was so satisfying.

If you were to meet someone who just landed from another planet, how would you describe poetry to them?

It's how human beings remember things. Images, scenes, scraps of phrases, a haunting sequence of words. It's how we connect things, describing our experiences. Poetry is a small unit of carefully selected and placed language, but those linked words cause us to see things differently. Writer William Stafford said poetry is sometimes like lucky conversation transcribed.

Why do you think we tend to romanticize the past?

I think it's because the present is so often tainted with bad news, and the preciousness of the present gets distracted by the things we're brooding over.

Poets in other parts of the world—South America, for instance—are revered, and treated like rock stars. Why are poets so under appreciated here?

Are we? I think the people who appreciate poetry feel great passion and respect for it. As for being underappreciated—possibly feeling marginalized is good for us ... [and] allows us to stand on the edges, observing, a lot of times. Do you ever hear people say "I would never look at a painting" or "I would never go to see a film"? No, probably not.  But I've had people say to me, "Oh, I never read poetry." Why not? Why are they denying themselves such a simple experience?

I think Rod McKuen reached rock-star status in the 1960s. It's nice that he had people reading poems, but geez, his stuff was schlocky. He was the Thomas Kinkade of poetry.

Yes, but I would never criticize someone who worked hard at creating. Anything that makes people read and feel more awake is worthwhile. There's room for so many styles, you don't have to love everyone.

Well put. But I used to get cavities just reading his work. You're married to photographer Michael Nye. What's the biggest challenge to having two extremely creative people in a household?

Oh, I see it as a delight to experience his work.  We're not competing against each other—in fact, we're never competing, period. It's always been a mutually supportive atmosphere.

Are you ever asked to critique his work?

He interviews his portrait subjects and posts the edited interviews with the portraits in his shows. Sometimes he asks me if I prefer this image over that, or to listen to an interview and respond to it before the final edit. And he's a great editor for poems, when I read drafts to him. He can always pick out the clunky line.

How do you feel about poetry slams?

I like to hear spoken words, but I've been asked to judge them, and won't do it. Again, I don't like the competitive aspect of them, but I'm really glad they have sparked a lot of interest. Anything that brings young people, or any people, to a sense of their own voices, and continues the oral traditions of the past is a good thing.

If you could go back in time to a certain literary period, what would it be?

Oh, the transcendentalist period, with Emerson, Thoreau, Walt Whitman and Emily Dickinson. I love going to New England and visiting the houses and museums there, seeing the writers' desks and belongings.

Name three things about yourself that would surprise people.

Oh.... maybe that I'm a hardcore Tom Waits fan? For the past 40 years. I just read that the new chairman of the NEH (National Endowment for the Humanities) is too. I'm going to write him a letter. That my favorite city is Berlin, and that, even today, I still feel awkward.

Do you find writing a struggle, or do words flow out of you effortlessly?

Somewhere in between. It often seems like a flowing gift beyond any understanding, but I always have several projects I'm working on, so if I find myself struggling, I can work on something else for a while, and go back. I have big faith in revision: I revise my work all the time.

Who's the most interesting person you've ever met?

Peter Matthiessen. He's the only American to win the National Book Award in both fiction and nonfiction. He died this year at 86. He was so charismatic, humble, prolific, vastly intelligent on so many topics, and supremely funny. We loved him. He was a passionate naturalist, advocate for the environment, and he loved San Antonio. He was visiting us once, and wanted to go to Mitchell Lake. We spent an extremely long time there. During that time he spotted seven different species of eagles, and he was so excited. He had never seen that many kinds in a single day before, he said. He had a profound youthful exuberance. But after around seven hours staring up and out, I had to tell him, "Peter, please, I'm starving! We have to go!" He and Michael played tennis together. He insisted on walking between all the missions—no cars!

I feel very lucky, having always been able to write and talk about writing for a living, because I worked in so many schools, conducting workshops etc., have never had a regular, full-time job for longer than a semester, but have been working fairly nonstop for 40 years. I've never had a publishing agent. Occasional semester-long teaching jobs I have at the Michener Center for Writers at UT-Austin, and elsewhere, have been fun. I will always feel extremely grateful to the Texas Commission on the Arts, which sponsored the artists-in-the-schools project back when I was getting out of Trinity, where I went to college. Did you know that at one point, way back when, local San Antonio school districts employed more visiting artists-in-residence than any other school district in the state? We felt proud of that. Maybe we could bring those days back. When you're a writer, you have a chance to live twice: once through your own life, and once through your writing.

Favorite quote to live by?

Jack Kerouac: "Rest and be kind. You don't have to prove anything."