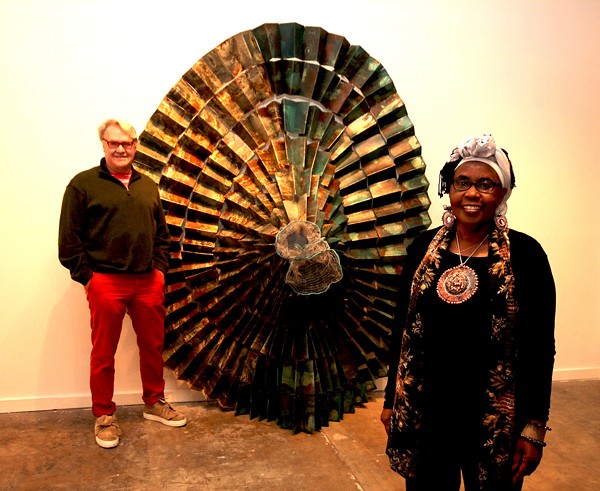 I first saw Naomi Wanjiku’s work when one of her pieces was added to the permanent collection at the Henry B. Gonzáles Convention Center last December. I was really impressed with the boldness and craftsmanship of the metalwork. She’s currently featured (alongside artist Jose Balli) in the Clamp Light Artist Studios and Gallery exhibition “Cyclical Rhythms” (on view through December 1). During the opening reception, I asked her about working with heavy metals and massive size. She walked me over to one of them and showed me how the pieces are actually light, flexible and could even be lifted with one hand. They’re magical.

If you can give me a short introduction of yourself, we can use that as a starting point.
I was born and raised in Kenya, and I grew up in Gacharage, a small village in Central Kenya. I come from the first post-colonial generation of Kenyans, raised by families and especially the women, who worked extremely hard to make sure our generation did better than their colonial experience. My grandmother was an important presence in my early life. She taught me many life lessons and introduced me to creativity. I studied design at the University of Nairobi, and came to the USA for graduate school at UCLA. My immigrant’s journey led me from Los Angeles to San Francisco, Dallas and finally San Antonio, where I have lived since 2000.

What was your early work like?
My early work was based on textiles and fibers — a result of my training both in Nairobi and Los Angeles. I combined surface design with several textile techniques (sewing, knitting and crocheting) and this evolved my work into art quilts. As a result of my multicultural education experiences, I created quilts through a combined African and Western perspective.

Did you start working small and then work your way up to massive metal pieces, or did you start big?
I went back and forth with scaling my work. In graduate school at UCLA, I worked big. After graduate school, I made small pieces of art. When I began experimenting with sheet metal, I scaled up my work. When I think about my growth, I believe my massive metal pieces were influenced by the sense of space that I experienced in San Antonio.

Tell me about your finishes. I can’t figure them out.
My work is almost exclusively made from sheet metal. I work with the environment in San Antonio and this changes the surfaces of the sheet metal. Then I do my composing. I finish the surfaces with clear metal sealants and this preserves the surface changes and also stops any further changes.

How would you describe your artwork to someone who has never seen it?
My work is a combination of multiple materials, techniques and processes. The mabati — sheet metal – is the primary material. I have developed a technique where I expose the sheet metal to the weather and environment, as well as to water. This changes the surface and then I introduce color. My dyeing process adds delicacy not normally associated with metal, with effects similar to water color. The result is an interesting interplay between surface and structure.

Who are the artists that influenced you?
My art is influenced by literature, theater, music and dance. I first read the works of the Kenyan author Ngũgĩ wa Thiong’o in middle school, and I have read widely, including the works of Chinua Achebe and Gabriel García Márquez, and the poetry of David Rubadiri.

Was there a moment when you realized that you had achieved success as an artist?
No. My goal is to go deep within myself and continue creating. This is what drives me. Creating again and again to bring my craft to perfection.

As a woman of color, did you encounter what would seem to me to be very obvious obstacles?
I am a woman of color and an immigrant. Experiences of discrimination, isolation and lack of mentorship make it difficult to show and market my art locally, regionally and nationally. The challenge is in gaining recognition and exposure of my work due to the lack of inclusivity. Networking opportunities are a big challenge. Guidance on how to network and access other necessary resources is challenging.

Tell me about how you were discovered in London?
Kathy Armstrong curated my work for a show at the Southwest School of Art in 2013. During the show, an article on my work was published in the San Antonio Express-News. I was also featured in the KLRN ARTS program. I contacted different institutions with the article and the video. October Gallery in London responded.

Do you find the art community in San Antonio welcoming? Please say yes.
Yes. The art community is welcoming. I have interacted with and shown in a variety of genres. The fiber-arts community provided me with a community soon after coming to San Antonio – they exhibited my work. Over time I have been welcomed to other niches of the arts, including the art-teaching communities.

What was your first experience with art?
My first experience with art was as a child growing up in a village in Kenya. The experience was from my grandmother and her friends. They were always weaving baskets when not engaged in their farming or other chores, and they taught me how to create baskets. They taught me how to create the materials for my art projects (baskets). These materials came from the barks of local shrubs and straws known as migiyo and makongo, and we transformed them into strings by scraping and chewing. They also taught me how to add color to the strings. Finally, they taught me how to weave the baskets whilst being creative with the use of color. When I look back at these early experiences, I now realize that the major lessons that they taught me were that “art materials” were everywhere and “art techniques” could be improvised in response to the demands of the creative process and the project.

Was there a moment that you remember or a painting that you saw that inspired you to become an artist?
There is no one single moment that stands out. However, there is a continuum of experiences early in my life that inspired me. These include watching the women in the village building their homes. The walls were made of clay which had to be molded just right. The granaries were woven from the supple branches of a specific tree, and off-the-loom woven baskets were everywhere. It occurred to me that almost everything the women created originated from some form of “string.” I adapted the “string” in all its forms, and from a very young age I was weaving my own skipping ropes and jewelry.

Did you have a mentor?
I did not have a formal mentor, in the Western sense of the word. However, I did spend a lot of time with Ruthu, the expert weaver in the village. Ruthu taught me how to weave the traditional Gikuyu basket, kiondo. She did this by allowing me to work on some of her weaving projects. Initially she sent me to gather the materials from the bush, and later she had me sit by her side as she designed and created. It was very informal — a combination of apprenticeship and friendship. With the benefit of hindsight, I now realize that Ruthu introduced me to the principles and elements of design very early. As I got into formal art and design training and education, the simple lessons that Ruthu taught me remained a guiding principle. At the University of Nairobi, I was mentored by Professor John Odoch, and my graduate school mentor at the University of California, Los Angeles was Professor Nathan Shapira. Both of them expanded my vision, and pushed me to experiment continually.

If you could own one work of art (without financial considerations), what would it be?
Murang’a Murals by Elimo Njau. Elimo Njau is a Kenyan artist who was commissioned to paint these murals in a church in Murang’a Kenya in 1956. This was a significant and dangerous time in Kenya because of the ongoing brutal war of independence from the British, led by the Mau Mau. The church had been built as a memorial to Christians who had died during this war. The mural depicts scenes from the story of Jesus Christ, incorporating local scenery and local people. The mural expands the message of grace and love and into a universal truth. Elimo Njau did not sign the murals. The ongoing war and his contribution to the effort for liberation through this artwork made it too dangerous for him to append his signature. In 2005, 51 years later, he signed the work.

Name three things that never fail to give you pleasure.
Dancing, cooking and creating art.

What makes you laugh?
The good, the bad and the ugly!

What were you like in high school?
I surrounded myself with great friends, and I joined a study group whose mission was to excel. Although the curriculum was wide, I gravitated towards the creative side of it. I loved music, and I played three different instruments — piano, harp and melodica. I worked hard, but also had a lot of fun.