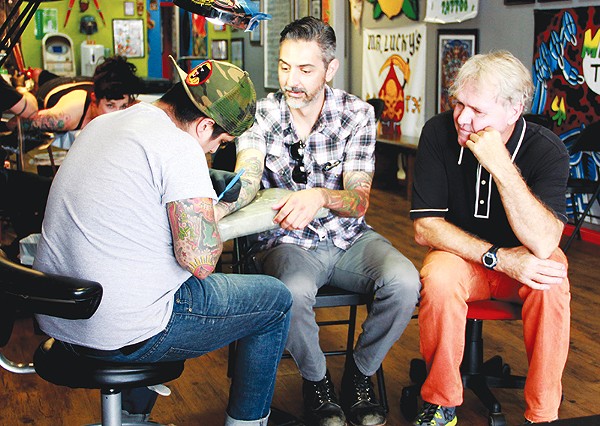 Local artist Ricky Armendariz is, at 45, one of the youngest subjects I've interviewed for this series. I first saw his work in the Denver Art Museum a number of years ago and his paintings have always seemed mature beyond his years.

In addition to his job as a professor at UTSA, his gallery exposure has gained rocket status, thanks in part to the Olmos Park gallery Ruiz-Healy Art. A native of El Paso, Ricky moved to San Antonio in 1999 after earning his MFA from the University of Colorado-Boulder. I caught up with him at Mr. Lucky's Tattoo, where he was getting a makeover on one of his sleeves.

Was art an important part of your family life growing up in El Paso?

No. Not at all. My mother was a teacher and we weren't allowed to speak Spanish during the week. On weekends, when our aunts and uncles came over, it seemed like only Spanish was spoken. Our family priority was to blend in. On a side note, Luis Jiménez was a family friend, but he wasn't considered famous to us.

What was the first piece of art that had an impact on you?

I think it was seeing old William Turner paintings in the El Paso Art Museum. They had lots of work by dead white guys.

How did you first become involved with drawing using a router?

In grad school at UC-Boulder. I needed an aesthetic that was all mine. I discovered the router gave me a sort of "Frontierland Western" aesthetic, which I liked.

Would you consider yourself a storyteller?

I like using protagonists from different cultures. For instance, the coyote is used in both Asian and Mexican mythology. Metaphysical links have always been in my work.

Tell me about the mythological symbolism in your artwork.

The myths and legends come from Greek, Roman and Indian traditions. The characters are used but placed in original stories of my own creations. Many traditions have a "trickster" character. I change the stories around and sample to draw further connections between them and my own Mexican Indian tradition.

Is it important that the viewer understand the stories in your work?

In your woodcuts, you clearly lay out the image first and then begin working your magic with the router, which is amazingly labor-intensive. Is that part tedious or therapeutic?

You're a master craftsman. Do you stress the importance of quality to your students? Please say yes.

Yes. I do two things: I interview each student to see what their goals and expectations are. I also tell them to read Robert Irwin's book, Seeing Is Forgetting the Name of the Thing One Sees.

What's the most important advice you give your students?

Do your paintings and prints flow out of you easily, or do you agonize over them?

They flow out of me. I'm very prolific. I only agonize over personal setbacks.

Some people claim to do their best creative work during times of personal turmoil. Does that apply to you?

Turmoil describes my life right now. I would say yes. I'm experiencing a new and creative time right now. Lots of changes and I'm putting my son and my work first and that's having some consequences. I had a show some time ago titled, "Ya Me Voy a Therapy," a foreshadowing of things to come.

It's been a real pleasure following your artwork over the years. It's certainly in the realm of Romanticism, but I've never read anything revealing about yourself in them. Is that an accurate observation?

I think that much of my work starts from a very personal place but I try to place it in a context that is more user-friendly. An example might be the story of Zeus and his lover Callisto. Both were wrong for each other and there were consequences to their actions.

If you could own any piece of artwork, what would it be?

One of the mercenary paintings of Leon Golub. He's politically engaged and his work deals with violence and injustice.

What's the most important lesson you've learned about getting older?

That I can do with a lot less than I thought I could even five years ago.