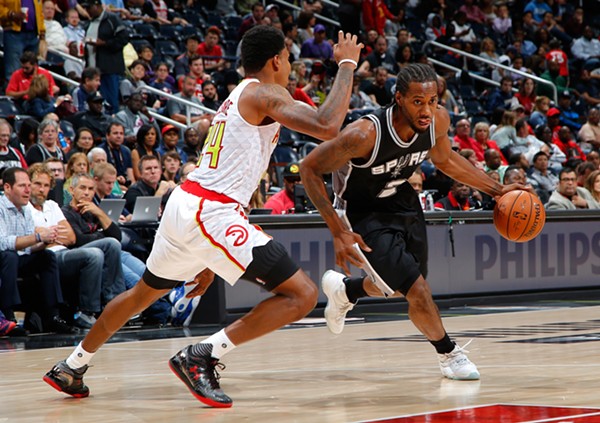 As the curator of last season’s exceptional “Go Spurs Show” exhibition, artist Rigoberto Luna has shown plenty of love for his beloved Silver-and-Black. A vinyl artist by day, Luna also creates a new sign for every Spurs game he attends. When one of his designs Kawhi Believe wound up in the hands of the young Spur’s approving mother Kim Robertson, via fellow artist Paul Francis, a T-shirt was born.

The first version of Kawhi Believe featured the transcendent Spur’s visage over a solid white background. Fresh for the playoffs, Luna has created a new take on his Spurs mantra, this time set against a black background with colors that pop. Fans can pick up the fresh t-shirt for $20 this Saturday at Alta Vista Skateshop (114 Broadway, 210-592-1413), from noon to 5 p.m.

“If you followed him well enough you knew he was gonna be the future,” says Luna, reflecting on Kawhi. “I think that’s the whole thing with the shirts. I wanted to make a shirt of someone that was gonna last for a long time."

Luna’s tribute to Leonard, has reached as far as Washington, D.C. and San Franciso where he has mailed tees. Earlier this season, he represented in Houston during the Rodeo Road Trip with a 4-foot image of Leonard’s oversized face accompanied by massive hands. As a lifelong Spurs fan, celebrating the future of his favorite team comes naturally.

Like many fans Luna already has his sights set on the post-season. “I think the Warriors go as Steph Curry goes and the Spurs go as Kawhi Leonard goes,” admits Luna. “To believe that we can beat the Warriors you gotta believe in Kawhi.”