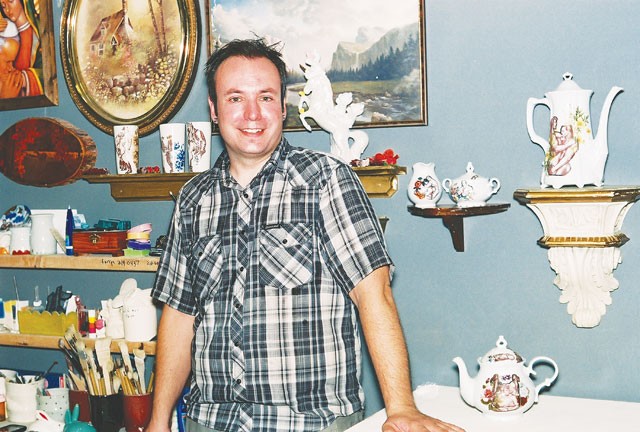 In the last two years, locally-based ceramic artist Wesley Harvey — who hails from Van Buren, Ind., the “popcorn capital of the world,” and has work in the permanent collections of the Shanghai Museum of Arts & Crafts and the Kinsey Institute for Research in Sex, Gender, and Reproduction — has made a splash by exhibiting (and selling quite a bit of) china and porcelain adorned with decals made by appropriating raunchy drawings by Touko Laaksonen (better known as Tom of Finland) that take gay male sex fantasies to a place that’s larger-than-life, giving the gay art collector the perfect excuse to throw a dinner party with a happy ending.

Tell me a little bit about how you moved from doing animal-based work into homoerotic stuff.

Well it wasn’t too drastic of a shift because a lot of my work was already very sexual ― the kitschy and cute work. [But] the homoeroticism was just disguised with bunnies and birds and butterflies and flowers. I was invited to do a show at UTSA Satellite Space with Ovidio Giberga, who teaches at UTSA. So he curated this ceramic show of new ceramic artists in town and it was me, Ryan Takaba, Jennifer Ling Datchuk, and Paul Northway. And he was doing studio visits with Chad Dawkins, who wrote the catalog for it, and was just looking to see what kind of work we were making for the show … and I had one plate. It was the first Finland plate that I’d made — I made it for a friend. I thought this would be funny ’cause I had wrapping paper with the Tom of Finland imagery on it.

So the first source was wrapping paper?

Well I had known about his work. I knew about Tom of Finland.

So you had a collection?

No, I didn’t have any of his books or … just knew about him, liked his work, and had this wrapping paper. So I scanned it in, made the decal, and made this plate. And it was just sitting on the shelf, like in the back. And I had all these other sculptures going. And he’s like, “Well, show me what you have,” and I said, “Oh, I have this,” and it had like a hundred rabbits with it engulfing this gold lady. And a couple other pieces that I was working on. And he pulled the plate out, and was like, “What’s this plate?” And I said, “Oh, that’s just something I made for a friend.” And he was like, “Do you have more?” And I said, “No, that’s the only one.” And so he said, “This is what I want for the show … Can you make more of these?” And I said, “Yeah, sure. What about these sculptures I’ve got goin’?” And he’s like, “I don’t want those. I want these.” And I said, “Okay,” and he was like, “Could you do a whole table setting?” And I said, “Sure.” I had no idea where I was gonna get all this china. Where I was gonna get more images. So I then bought his book, Finland’s book, which is this massive coffee table book that’s like $200. But it had every Finland image in it. And so that’s what I’ve been using now. So I found a place in Detroit where I bought the commercial porcelain and then just started collaging.

So you bought premade porcelain plates?

Yeah, up until these three cups, everything’s been commercially produced.

And then a lot of found stuff?

And a lot of the found plates, too.

Yeah, and The Alamo. So I had this whole dinnerware set going and those were part of it, the tea set up there, the tea- and coffeepot. But they’ve been changed now.

So you add to them?

I added more flowers and outlined them in silver luster. And so I had all this dinnerware, it was like a 45-piece set. And I was thinking, you know, how am I going to display this in a gallery? I hadn’t made anything that big before. So I was at a friend’s house having dinner and I was looking at her mom’s table and I was just like, “Wow this is a really nice table — it’s antique, it’s very well made, it’s clean.” And I just asked her, I said, “Lucy, can I borrow this?” And she said, “What for?” And I said, “To use as a pedestal for a show.” And she let me, so that was the start of it. So that’s kind of how it happened. And it got great feedback from everyone in the community. It made me want to do more.

So it didn’t irritate anyone?

Nobody got irritated, which I was really surprised by. The gallery was kind of worried, they put a sign up that said, “X-rated material around the corner.”

Did you sell much from that show?

I didn’t sell anything from that because I priced it as one set.

Which was how much?

Thirty-five hundred at the time.

And that was without the table?

Without the table. The tag said, “Minus table.” Although Lucy was like, “If you sell it for ten grand, you can just give me a cut and you can sell the table.”

Did she come to the show?

Uh huh, and she liked it, yeah. The next show was at Fl!ght last September and everything was found at thrift stores in San Antonio. Justin asked me to do the show and he wanted it dirty.

And I know you sold all of that.

What about your show at Three Walls? How well did that sell?

That sold pretty well. I had six plates and I sold all those, but then the Three Walls show I wanted to be a little different from Fl!ght. I went back to the commercially produced porcelain for the plates, and then I did porcelain tiles that I collaged and then framed. So I wanted it to not be a bunch of plates again and so I went to this kind of collage-paintings.

Are you nervous that the Tom of Finland people will come after you?

They’re clearly Tom of Finland. And when people tell me, “Oh I love your drawings,” I make it clear that these are not my drawings. And I give him credit for that, but none of them are the original straight scans from the book and then put on my ceramics. I go into Photoshop and take out parts of the images … But I am a little nervous. Always. And I feel like, what’s the worst that could happen? They’ll just tell me to stop.

If you were making millions of dollars with this and selling it in Pottery Barn, things would probably be different.

People have told me that I should approach the foundation and show them samples. But I’m kind of nervous … I was nervous to the point that I didn’t have any Finland stuff on my website. At all. And then after the Fl!ght show, I put it all up. So I have all three shows here in town with the work up as well as the new Fiestaware and the new found plates. And some blog put the UTSA Satellite show up — I don’t even know where this blog’s at — and some guy from Florida contacted me in February and said, “I love this.” … And he asked for a price list for dessert plates, salad plates, dinner plates, cups, and saucers … and he ended up getting six place settings. That was like the biggest order I’ve done so far. It was a 30-piece set that he bought.

Are they safe to eat off of?

He wanted to eat off of them. So the commercially produced ones are microwave-, dishwasher-, and food-safe. I fire the guys on hot enough so that the image melts into the glaze. So it’s permanent. It’ll never come off. The found plates, some of them already say that they’re not food-safe. So when I do the found plates, I’m thinking more of sculpture — they’re not meant to be eaten off of. I think the price reflects that, too. I don’t really rely on my functional work as income, and so I don’t price it that way. I have friends who are like, “Your pots are too cheap … These should really be $50 and not $30.” I think I need to start off much smaller. When you’re charging $50 a tumbler, you’re really only targeting the ceramic market. Ceramic people have no problem paying $50 for a tumbler, but my roommate has a huge issue with paying $50 for a cup that she’s gonna drink out of. But in the ceramics world that’s like a normal price. And I would rather more people have them.

Do you feel that in any way your work is speaking to gay pride? Or is it just something you’re doing because you love the way it looks? Is there a context?

The rabbits had human penises?

Yes. I basically took away all the body parts but used all the same sexual references. But getting to San Antonio, the overt nature is wanting to come back more.

People seem ready for it.

They’re ready for it. And will it hurt me in the job market? Yeah, I think so, but I’m not necessarily looking for a fulltime tenure-track job anyway. So I want to make the work that I want to make.

What about your position as an educator at University of the Incarnate Word and Northwest Vista College? Do they care what you’re making? Are they aware of it?

Both schools are aware and they actually love it.

And my students, you know, when you go to class the first day and they see your name – God bless Google nowadays. The second day of class it’s like, “Oh, Wes, we saw your plates.” And so I ask, “What did you think?” And one student said, “Well I like them. But what if you had some with girls on ’em?” I’ve had students come up to me and say, “I want to do this project and I want it to have penises all over it or vaginas. Can I do that or will I get in trouble?” I let ’em do whatever they want. If they look at my website I can’t be like, “No, you can’t put a penis on that cup.” But as far as relating to gay pride … I think now at being 32, I’m very comfortable in who I am and what I’m making. These are images that sometimes can be a little bit much (even for me); Finland work can be as simple as a guy with a hard-on or it could be a full-on fisting scene. These are all things that are part of the gay culture and a lot of times they’re not really talked about or in the forefront. I personally like it because it’s kind of nice to be putting that imagery out there because this is stuff that is happening even though people may or may nor want to think about it or talk about. I think it speaks to gay pride, but I’m gonna make it every month, for sure. It’s gay pride every month in this studio.