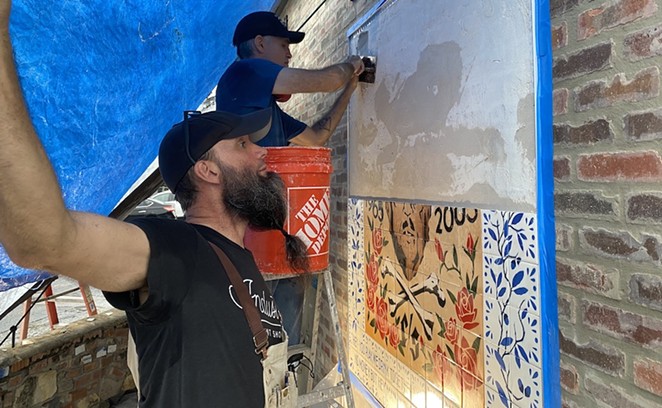 Ram Ayala, the late owner of Taco Land, received a fitting tribute Saturday with the installation of a memorial mosaic at the site of the storied underground rock club.

Working under a tarp in the rain, visual artist Mig Kokinda and assistant Matt Simpson — both Taco Land regulars — assembled ceramic tiles on the outside wall of the Pearl-area Velvet Taco. The chain restaurant occupies the spot where Taco Land once stood.

Kokinda stenciled the tiles with an image of Ayala, who was murdered, along with doorman "Gypsy Doug" Morgan, during a 2005 robbery. The design also includes a quote from the beloved bar owner.

The project came about after SausTex Records honcho Jeff Smith and others convinced Dallas-based Velvet Taco to rethink a wall mural it designed in-house. If you need a refresher on how that all went down, read this.

Smith reached out to Kokinda to design a replacement mural that would make a more fitting tribute to Ayala. But, worried how long paint would last on the brick wall, Kokinda chose tile as his medium instead.

"I tried to think of how to do it, and I kept coming back to all those shrines people have in their yards on the South Side and the West Side," Kokinda said.

By early evening, Kokinda and Simpson had fully assembled the mosaic and covered it with plastic sheeting to protect it from the elements. The pair will return in the next few days to apply grout and a sealer.

A bronze plaque memorializing Ayala, Morgan and Taco Land will also be installed at Velvet Taco adjacent the gnarled oak tree on its patio.