In his 1872 book The Birth of Tragedy, iconic philosopher Friedrich Nietzsche built a framework around Apollo and Dionysus, mythical Greek gods with wildly different personalities. While Apollo represents light, truth, logic and reason, Dionysus symbolizes wine, festivities, fertility and chaos. Employed as a means to analyze Greek tragedies and other forms of ancient art, Nietzsche’s concept of the Apollonian and the Dionysian argues that these divergent characteristics shouldn’t be separated but intertwined — and that a delicate balance between them is intrinsic to great art.

Timeless, universal and infinitely adaptable, this dichotomy has influenced the work of many famed creatives — Herman Hesse, Jim Morrison, Ayn Rand and Stephen King among them. On a local level, it recently bubbled to the surface when San Antonio gallerist Patricia Ruiz-Healy was assembling “Manos (Hands),” an exhibition pairing Texas artist Richard Armendariz with Spanish artist Andrés Ferrandis.

“What drew me to invite the two of them is that aesthetically they are pretty far apart, opposite poles so to speak,” Ruiz-Healy explained. “By the same token, they are both very sensual in the way they handle material. It’s a bit of the Apollonian and Dionysian concept that I find intriguing. I wanted to present to the public these two different ways of art manifestations and concepts and find their differences and more importantly their similarities.”

As it showcases two established artists with distinct styles and points of view, “Manos” is easy to appreciate without any knowledge of this construct — or the specific interests of the children of Zeus. But if one did get the memo, they’d likely file Armendariz’s moody, figurative paintings under Apollonian and Ferrandis’ abstract prints and assemblages under Dionysian.

Although essentially split down the middle into two visual narratives, the show finds common ground through bold colors, non-traditional art-making materials and a deft use of text. And, in a turn of events that would surely win Nietzsche’s nod of approval, the two artists collaborated from afar on a series of small-scale dioramas that fuse Ferrandis’ affinity for found objects — in this case indigenous artifacts — and Armendariz’s fondness for fauna and fiery sunsets.

An El Paso native who earned his BFA from UTSA and now works there as an art professor, Armendariz has exhibited his work all over the world — from Boulder to Bosnia to Bethlehem. Drawing thematic influence from “the mystique of the border region, including mesas, honky-tonks and big skies reaching as far as the eye can see,” he creates masterful work populated by symbolic imagery, including desert vistas, beasts that evoke fables and folklore, and ominous cloud formations scrawled with vivid messages such as “You Make Me Wanna Take My Boots Off and Drink Hard to Hank Williams Songs.”

Beyond the visual vocabulary he’s developed, Armendariz boasts a quickly recognizable aesthetic based on an unusual approach to painting. After creating conceptual landscapes in oil paint on wood panels — and allowing them to dry for several months — he uses a customized router to meticulously carve imagery into the foreground. The overall effect is one that commands attention as the eye tends to register individual layers before allowing them to mesh into one mysterious composition.

In “Manos,” Armendariz shows his fascination with the animal kingdom in a 2020 painting titled Set the Woods on Fire (Remix) and proves his lyrical way with words and code-switching in a series of dark floral still lifes — a favorite reads, “There Is No Fuckin’ Tomorrow, Entonces.” But there’s an undeniable wow factor to Blown Off Course, Guided by Spirits, which depicts a pirate-worthy ship sailing under a stormy purple sky. Sailboats are a recurring theme for Armendariz.

“Culturally we associate the sailboat as a symbol of breaking away, being pushed along by the elements, a kind of freedom,” he said. “But there is always another way you can read it. You can also have a lack of power, or [be] locked into a situation that you have no control over. I look for images and concepts that have both positive and negative meanings. I want the work to pose questions about that in-between space.” Born in Valencia, Spain, and now based in Miami, Ferrandis comes from a strong design background and is currently collaborating on an architectural gallery project in Baja California. It’s safe to say many San Antonians were introduced to Ferrandis’ work through his 2014 Ruiz-Healy exhibition “Numinous,” a collection of collages informed by photography and pop sensibilities. While collage still factors into his new work for “Manos,” the bulk of his pieces are sculptural in nature.

“I don’t feel it’s different … but an addition,” he said of the new trajectory. “Collage is a totally different media and narrative proposal. That was my intention at that time. In this present show, most of the materials I used were found no more than 200 meters from my studio in Baja California.” 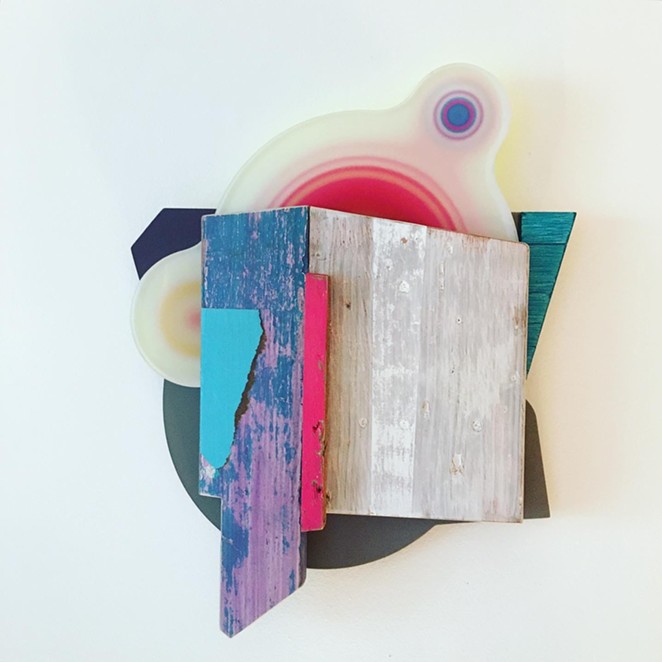 With titles such as Eco and Islas, these found-object assemblages speak to both their origin of Ensenada — a port on Mexico’s Pacific coast — and the artist’s unabashedly playful color palette. Weathered scraps of wood are painted cotton-candy pink, sky blue and acid green, and stacked atop polycarbonate disks silkscreened with radiating circular patterns reminiscent of bullseyes. Ferrandis’ proclivity for the circle and the interplay of joyous colors coalesce brilliantly in a large pair of prints titled Amate I and Amate II.

While both are covered in a constellation of multicolored orbs that appear to be fading out of focus, one is starkly printed with the phrase “Yo Te Cielo.” In addition to striking up a curious conversation with Armendariz’s Spanglish offerings on the opposite wall, the words reference a cultish love letter penned by Frida Kahlo. Employing a bit of poetic license to turn nouns into verbs, Kahlo wrote, “Tú Me Llueves, Yo Te Cielo (You Rain Me, I Sky You).”