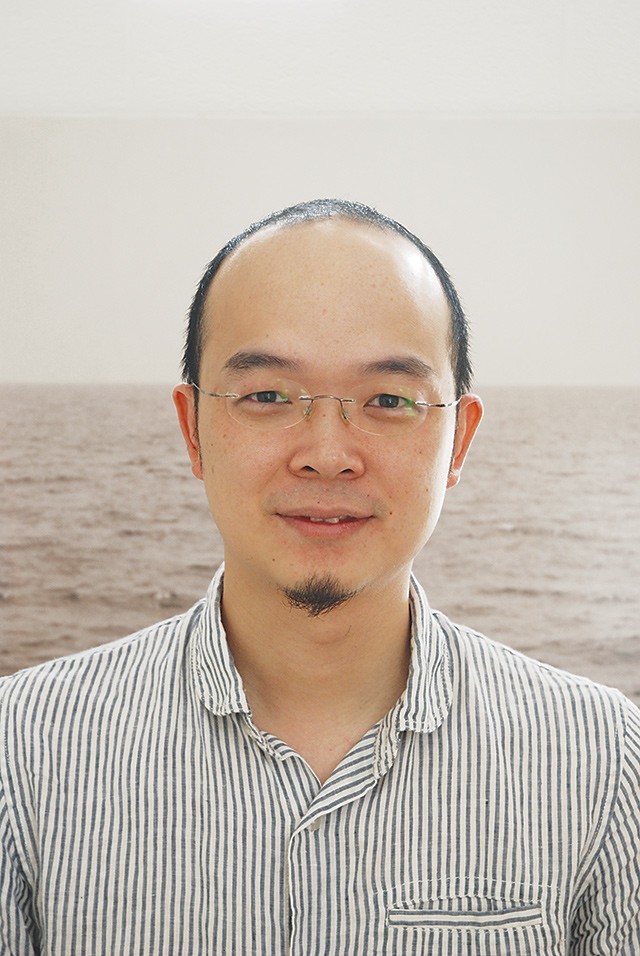 When I sit down with Hong Kong-based artist Pak Sheung Chuen, he opens a small black notebook filled with scrawled Chinese script and abstract drawings, produced while exploring San Antonio over the past three weeks. “That is the record of this kind of writing I do every day. The first part of the creation process is doing this,” he says. It is the source material for his exhibition set to open July 11 at Artpace, as part of the acclaimed Artpace International Artist-in-Residence program. Pak will also create four pieces for the Current, published in four consecutive issues beginning with this one.

“The first thing I do is explore the city by random, to see what is the thing that is most interesting,” Pak explains. “For example, this time I am in Tokyo, and I find this book, this map. It’s very interesting, because it is small and when you open it, in the middle there’s always some places missing.” He points to a photo of the map book, where the binding conceals parts of the map. “How can you have it like that? If I live in there, and I tell my friend [laughs]…. So, it gives me a very strong inspiration, and then I make a structure.” Pak traveled along the map crease, visiting all those places that the binding hides, taking photographs while there with himself in the center of each image. Finally, he had the photographs bound into a book, so that part of his body is hidden in the binding.

In San Antonio, Pak has been taking busses at random, but he has also deliberately sought out some cultural spaces. He tells me he was a devout Christian for seven years, going to church several times a week. His English nickname, “Tozer,” is taken from Evangelical author A.W. Tozer, whose anti-materialist writings influenced Pak’s dematerialized art practice. Although he doesn’t attend church regularly now, he says “I think the belief in myself is still very strong. So when I come to, for example, here, I start from finding some church to understand about San Antonio. But the church I go is not the church I used to go. For example, I want to find the Jehovah’s Witness, and the Church of Scientology, the Tom Cruise church.”

Pak’s “structures” can be similar to John Cage’s chance operations. In Tokyo, he follows a path created by the idiosyncrasies of the publication process, more or less by chance. But how he chooses to compose each photo opens up some room for improvisation within the structure. “I want to become the participant in my project, more than I am the documenter,” Pak explains. Yet he consistently plays three roles: the builder of the structure, the participant in it, and the documenter of the result.

“My artwork is always based on the human scale. My body, my energy, the time I can use, how long I can walk.” Pak tells me that the heat has prevented him from fully exploring San Antonio by bicycle. Not just the heat, but the structure of the city: “But when I put this human scale in this city, I find this is not a city for human scale. So I find I have a difficulty to use my human body to explore here. And I become a vehicle scale,” he says, laughing again.

This type of city exploration began when, for more than four years, Pak produced an artwork each week for the Hong Kong newspaper Ming Pao. The way he writes about and photographs his work still bears the imprint of journalism. Typically terse descriptions accompany photographs of actions ranging from poetic to playfully subversive.

The artist likes to invent unexpected ways of interacting with the environment and culture around him. “This is the Mark Six in Hong Kong, this is the lottery game. And I follow the rules of the game, but I make different images.” He points to a lottery card with several grids of Scantron-style bubbles. Each grid contains six filled bubbles, which spell out “Win.” On another card, he has made the image of a tower. “This is showed in the newspaper, so it become a method for the people there. You can copy this, at the same time you can develop your own image. And I find that this is my role. I try to find different things in Hong Kong, but I try to open the rules or the method of the game.”

Some may dismiss this kind of playful cultural engagement. Pak, for his part, rejects the idea that artwork should be serious. “For my own working habit, I really enjoy this very loose thing... I just do the thing that relaxing me.” This may sound odd for an artist who has represented Hong Kong at the Venice Biennale, among the world’s most prestigious art fairs. Perhaps there, too, he has opened up the rules of the game.