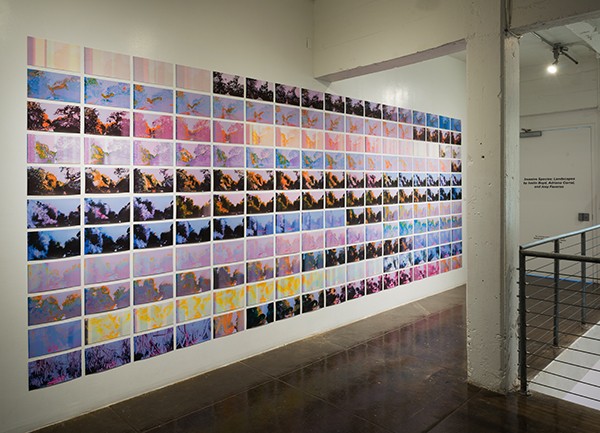 To prepare for "Invasive Species" at Artpace, artist Joey Fauerso took a tour of the Negley/Gill Swan Lake Ranch on the coast, riding on an airboat to the marshlands at San Antonio Bay where the Guadalupe River empties into the Gulf of Mexico. Utilizing almost 200 abstract paintings she made of one section of river along the trip, she's created a constantly shifting and changing video, Guadalupe-After Images, that transforms the tired-out genre of landscape painting into something dynamic and contemporary.

For this Hudson (Show)Room exhibit, Artpace director Amada Cruz challenged three area artists to imagine what landscape painting might be like if 19th-century artists had access to 21st-century technology. Besides Fauerso, who teaches at Texas State University in San Marcos, Cruz invited Justin Boyd, chair of the sculpture and integrated media department at the Southwest School of Art, and Adriana Corral, who teaches at the University of Texas at Austin. 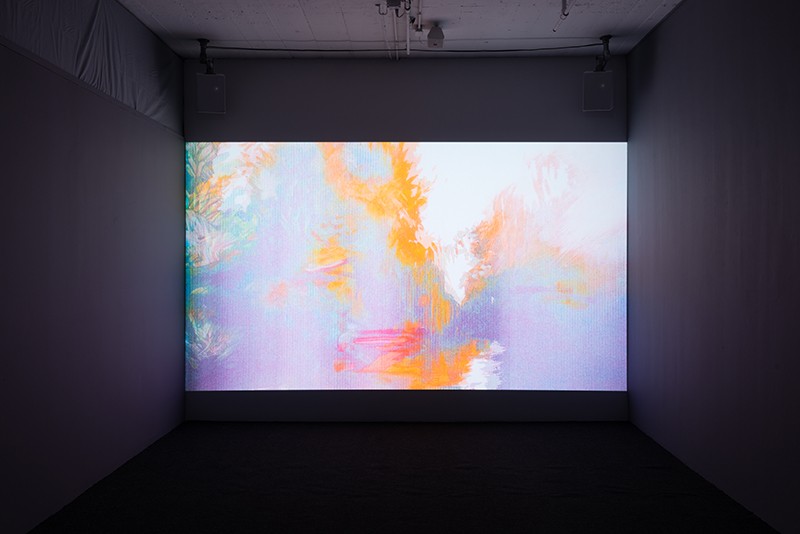 Watching Fauerso's metamorphosing video, which runs for almost an hour, mimics the experience of sitting outdoors gazing at a landscape, watching the changing colors and textures and letting your thoughts roam. But Fauerso's paintings reflect a relentless creativity. Focusing on one small section of the river, perhaps a sharp bend where the trees on the left bank tower over the smaller right bank, the basic composition of the paintings does not change, but the colors, shapes, textures, brush strokes and mark-making are constantly morphing and evolving. Each frame presents a different way of looking at the solitary landscape.

Fauerso photographed and reprinted each painting four times, allowing the ink in her printer to run down, adding an element of chance that causes the images to intensify and fade. She's displaying a huge grid of the printed images on a wall, while all 792 images are animated in the video. But the video is slow moving like a trip on a river, underscored by the almost subliminal hum of Paul Fauerso's subtle soundtrack. It's easy to imagine weather and seasons changing, the sun rising and setting, or ghosts of memory flitting through the physical world.

Traveling by train is as much a part of the American Dream as drifting on a river. Boyd updates the progressive icon of 19th-century landscape painting, a steam train chugging through a pastoral countryside, by reversing audio and video inputs, so you can see sound and hear pictures. Lines correspond to the loudness of sounds and shifting tones correspond to the density of the image in his video, Two Tracks. Boyd lives beside railroad tracks where 20 to 40 trains pass by per day. With his reversed inputs, Boyd recorded the trains blasting by in a blur of boxcars. The flickering image looks like a badly tuned TV, but you realize you can "see" the cloppity-clop of train wheels and "hear" the throbbing moan of industrial commerce on the move.

A brutal landscape littered with forgotten victims haunts Corral's Per Legem Terrae (By the Law of the Land) (2014), a solemn, minimalistic "counter-monument" to the women murdered during the past 20 years in Ciudad Juárez, Mexico, across from El Paso. Most worked in maquiladoras (factories) on the border that sprang up after the North American Free Trade Agreement (NAFTA). Young women flocked to Juárez to seek their fortune, but hundreds became prey for homicidal predators. The "law of the land" alludes to the government's failure to fulfill its promise to protect citizens.

Corral compiled lists of the names of women violently slain, which she transferred to the wall, using layering to gradually obliterate the names until they appear as smudged lines in an altar-like drawing resembling a giant diamond on the wall facing two "reflecting pools" composed of ash created by burning the lists of the victims' names and reddish-tan earth collected from the border between Ciudad Juárez and El Paso.

The bleak, austere installation evokes the lonesome desert landscape of the border, but Corral's intention is the opposite of Maya Lin's Vietnam Memorial, which records the names of the dead in shiny black marble permanently embedded in the landscape. Corral's un-monument is as fleeting as news headlines, the barely legible names destined to be painted over and the sand and ashes swept up, leaving hardly a trace.