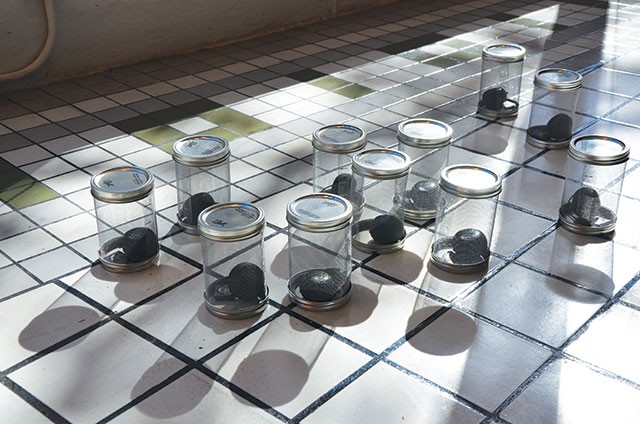 Los Angeles artist Mungo Thomson says his work is often based on the notion of taking a dumb idea seriously. That’s why he spent five years working with Los Angeles composer Michael Webster to transform cricket chirps into a musical score for a 17-person orchestra performing on violin, flute, clarinet and percussion. Ranging from propulsive rhythms, akin to African tribal drumming, to dissonant shrieks, “Crickets for Solo and Ensemble” would not be out of place in a concert of avant-garde classical compositions, but it is based on what most of us consider the sounds of silence.

“Crickets” features an almost 18-minute HD video of the intense performance by the formally-dressed musicians showing in Artpace’s Hudson (Show)Room, along with an installation in the downstairs WindowWorks gallery of cricket cages made with Mason jars and screen wire, each containing an iPod and tiny speaker playing cricket solos.

Because most people associate crickets chirping with the quietest of nights, Thomson considers crickets “more silent than silence.” He was inspired by John Cage’s well-known composition 4’33”, which requires a pianist to sit silently in front of a piano for four minutes and 33 seconds while the audience listens to the ambient sound of the music hall. Cage’s performance of silence opened the doors for all types of ambient music, from muzak to new age, but it also underscored the fact that complete and total silence is something we rarely experience.

For the sounds of crickets, or stridulation, Thomson used field recordings of cicadas and crickets compiled in a 1999 CD, Cigales et Grillons, by Fremeaux & Associés, a French recording company, as part of its Library of Sounds. Throughout the video, subtitles at the beginning of each section tell where the original field recording was made, including Cameroon, Senegal, Martinique, France and Venezuela.

Webster collaborated with Thomson on a straight transcription of the chirps, resulting in a score of about 70 pages. At the entrance to the gallery are 25 framed and mounted pages of the score, although you can barely make out the impressions of the notes because Thomson printed them using a pressure plate, but no ink, to provide a visual equivalent of silence.

Watching and listening to the performance of “Crickets” is alternately irritating and fascinating. The inherent screechiness of the violins often seems at odds with the sonorous sounds of crickets, while the percussive musicians come closest to imitating the insects using a variety of instruments, especially Latin percussion instruments such as maracas, castanets and claves. One enterprising musician even played a new instrument using a bicycle gear.

Much of Thomson’s work is concerned with the voids that exist within culture—gaps, pauses, digressions and mistakes. “Crickets” may be seriously dumb, or dumbly serious, but it is designed to attune us to the sounds of silence that we usually tune out.