There are plenty of places in San Antonio that deliver top-tier entertainment — from stage productions to stand-up comedy and beyond. Here is a look at some of the city’s major venues and some hidden gems.

Tobin Center for the Performing Arts
Patrons only need to purchase a ticket for one of the 1,750 seats in the world-class performing arts venue to enjoy the array of theater, comedy, music, film, dance and speaking events that take place yearlong along the Riverwalk’s extended museum reach. Some of the incredible events scheduled for the first part of 2020 in the Tobin’s H-E-B Performance Hall include An Evening with Dr. Jane Goodall, world-renowned primatologist; performances by the San Antonio Symphony; concerts by the Monkees and the Beach Boys; and a national tour stop of the hit reality TV show The Masked Singer. 100 Auditorium Circle, (210) 223-8624, tobincenter.org.

Majestic Theatre
San Antonio’s oldest and largest theater for performances landmark to explore when spending time in the downtown area. Given its extravagant architectural details, including a diorama of a Southwestern city along the upper walls of the theater itself, little surprise the building was named a historic state and national landmark in the early 1990s. What’s more, the 2,200-seat theater last year celebrated its 90th anniversary. On the schedule for its 91st year is a mix of theater performances, concerts and other events. That includes stage productions of Aladdin, Rent and Charlie and the Chocolate Factory; music by the Temptations and the Four Tops; and comedy shows from Ali Wong and Tim Allen. 224 E Houston St., (210) 226-3333, majesticempire.com.

Empire Theatre
Nuzzled right up against its big brother, the Majestic, is the Charline McCombs Empire Theatre, which used to host vaudeville shows and silent film screenings in the late 19th century. Closing in 1978 and reopening a decade later, the Empire has become a place for many musicians, actors, comedians and other entertainers to share their craft with San Antonio audiences in a more intimate setting. This year, the Empire will welcome the likes of Elvis Presley impersonator Dean Z; the Entre Nos Live Tour featuring a roster of talented Latino comedians; and the musical Ella Enchanted by the Magik Theatre. 226 N. St. Mary’s St., (210) 226-3333, majesticempire.com.

Aztec Theatre
Built in 1927, the historic Aztec Theatre has become one of the top multi-purpose event centers in San Antonio. Like both the Majestic and Empire, it’s in the National Register of Historic Places. It even got a shout out in the popular 2003 travel book 1,000 Places to See Before You Die. Its elaborate sculptural homages to pre-Columbian art and architecture make for a memorable concert experience. The Aztec’s 2020 calendar includes a long and diverse list of musicians who will be performing for SA fans, among them Ivy Queen, Lyfe Jennings, Ally Brooke, Collective Soul and Bone Thugs-N-Harmony. 104 N. St. Mary's St., (210) 812-4355, theaztectheatre.com.

AT&T Center
While sports fans know the AT&T Center as the home of the five-time champion San Antonio Spurs, plenty of things also happen in the East Side venue besides professional hoops. This year is the last one to see the AHL affiliate San Antonio Rampage play hockey. The team was recently sold and will pack up and move to Las Vegas after this season. Although there will be some sad goodbyes at the AT&T Center, San Antonians will also say hello to a number of events, including tour stops by TobyMac, Jimmy Buffett, Bon Jovi, Janet Jackson, Harry Styles and the Deftones. 1 AT&T Center Parkway, (210) 444-5000, attcenter.com.

Woodlawn Theatre
Known for its art deco design, the historic theater produces six main-stage productions annually and holds open auditions for San Antonio-based actors. It was named the Best Community Theater for five consecutive years by Current readers, from 2014 to 2018. The Broadway-style musicals scheduled for this year include On Your Feet! The Story of Emilio & Gloria Estefan, Cinderella, Ragtime, Jekyll & Hyde and Holiday Inn. 1920 Fredericksburg Road, (210) 267-8388, woodlawntheatre.org.

Laugh Out Loud Comedy Club
After the Improv Comedy Club at Rivercenter closed its doors in 2018 after 25 years of yuks, the Laugh Out Loud Comedy Club became the only bar-sized venue in San Antonio booking big-name standup acts. This year, the club will host comics including D.L. Hughley, Tom Segura, Damon Wayans, Jay Pharoah and Michael Rapaport. 618 Northwest Loop 410, (210) 541-8805, improvtx.com.

Public Theater of San Antonio
The Public Theater, known as the Playhouse San Antonio until its 2018 rebranding, is located in San Pedro Springs Park north of downtown. Along with its theatrical productions, the venue offers acting workshops and community classes. This year’s season will include the plays Admissions, Bright Star, Lonely Planet and Amélie, among others. 800 W. Ashby Place, (210) 733-7258, thepublicsa.org.

Guadalupe Cultural Arts Center
Through dance, theater, visual arts and film, the GCAC has been a mainstay in the local Latino community for decades. The center’s gallery is a vital center for visual arts, and its theater hosts events featuring the GCAC’s own dance company and is home to CineFestival, the longest-running Latino film festival in America. This year, the stage will be set for the dance company’s 2020 season of Celebrando Tradiciones, along with other events like Holiday Saxophones and La Pastorela Folklorica. 1301 Guadalupe St., (210) 271-3151, guadalupeculturalarts.org.

Blind Tiger Comedy Club
Located in the basement of the Magic Time Machine restaurant, the intimate, New York City-style club is a local fave of comedy fans, not to mention the comedians themselves. On occasion, big-name standups perform at LOL will even make unscheduled Blind Tiger appearances. Imagine sitting five feet away from Hannibal Buress performing a surprise show at midnight. 902 NE Interstate Loop 410, (210) 828-1470, blindtigercomedyclub.com. 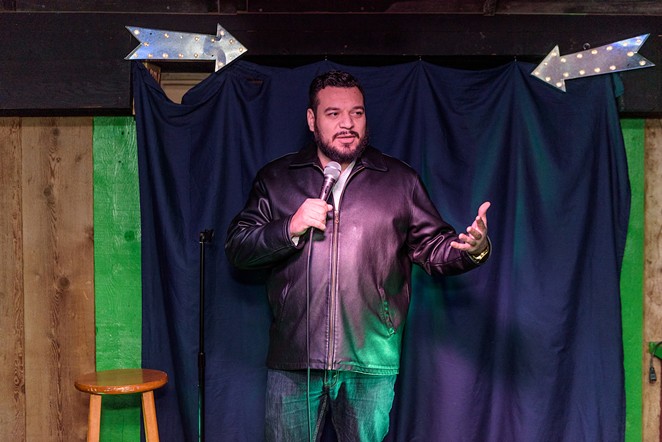 Jump Start Theatre
This theater, founded in 1985, focuses on original stage productions. This year, performances will include Model Talks by Pamela Dean Kenny, I’ll Remember for You by Lisa Suarez and Tejana Rasquacha by Marisela Barrera. 710 Fredericksburg Road, (210) 227-5867, jump-start.org.

Overtime Theatre
Branded as “theater for the people,” the Overtime gives playwrights in San Antonio and surrounding areas room to show off their talent. That’s all part of its mission to be “San Antonio’s answer to off-off Broadway Theater.” This year’s schedule includes William Shakespeare’s Twelfth Night and an improv comedy series on Saturday nights. 5409 Bandera Road, Suite 205, (210) 557-7562, theovertimetheater.org.

The Vex
The Sheldon Vexler Theatre is a black box theater known for its experimental works. To make visitors’ “VEXperience” even better, the venue is working on physical upgrades, including new theater seating. On the schedule for its 21st season is Watson: The Last Great Tale of the Legendary Sherlock Holmes. 12500 NW Military Highway #275, (210) 302-6835, vexler.org.