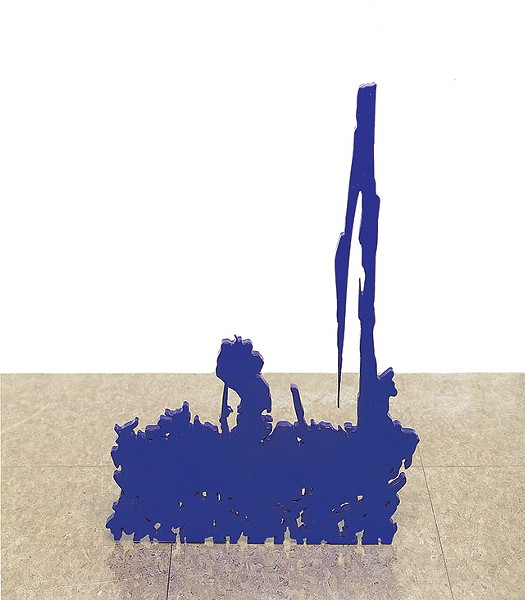 It can be difficult to negotiate a single artist’s oeuvre if that artist does not remain consistent in their aesthetic, contextual and methodological concerns. When dealing with an artist as subtle as Arturo Herrera, the manner of interpretation is by nature complex, further complicated by what at first seems like wildly varied and distinct bodies of work, each adopting the formal affectations of the medium at hand: architectural interventions, collage, abstract paintings, biomorphic abstractions, hybrid paintings, photography, sculpture, mail art. Despite this, the sampling of work at Linda Pace Foundation makes it obvious that the artist’s fundamental concerns are indeed constant, yet sublimated almost to the point of fracture.

Herrera was born in Caracas, Venezuela, and currently resides in New York City and Berlin, Germany. In 2000, he was a resident at Artpace and it was during this period that the late Linda Pace began to collect his work, including a diminutive, three-dimensional sculpture Untitled (BLUE) 1998 and two large, identical monochromatic Urethane-on-MDF wall-hung pieces both entitled Here (2000) commissioned during his residency. The yellow and blue of both works play off each other and the Foundation’s reflective white floor, emphasizing recurrent strategies of exchange between the works and how they can function in a particular space.

Minimalism and its celebration of the pure and self-contained object obviously intrigues Herrera. His stylized abstractions, however—be they sculptural like Untitled (BLUE) or painterly as in Here—are truly postmodern in that they depend on references to past styles (like minimalism) and to each other. Consider the friction between formal and conceptual modes of visual articulation: one seeks purity, the other meaning. Herrera relishes a form of provocation that comingles the two.

Using these works as a starting point, Herrera’s exhibition at the Pace Foundation reads like a small-scale retrospective, cycling around the space in punctuated bursts of color and form. Each work plays a progressive, related and occasionally overlapping role in both establishing and dismantling certain tensions, executed with precision but imbued with calculated uncertainty.

Herrera often mines popular culture for source material, leaning toward graphic and cartoonlike images that he subsequently cuts, deconstructs and then reconfigures. But he does not completely rob them of their original form. Therefore, the work’s austerity—with respect to formal concerns—is present but forever in question, muddied by bouts of reference and postmodernist quoting that engenders associative readings. This is apparent in the sculptural wood and steel works on exhibit, but most readily obvious in the collages of printed and painted images, felt and other media. That Herrera’s hand is present in some works and absent in others is another indicator of inscribed tensions—the mechanized precision of the steel series Walk (2009) vs. the sensory/visual overkill of certain collage works—Mushroom (2009), in particular.

Juxtaposition, intervention and reconfiguration: all of these acts coalesce in the large-scale collage series Rapt (#1-#4, all 2011), which are by far the most resolved works on display. In fact, they can be considered a metonym for the exhibition itself. Perhaps this is why the artist chose to hang three of these collages directly in the sightline of the entrance. Subtle in spite of their scale, the collages delicately balance every aesthetic element in the exhibition. Herrera hung dark felt in abstract shapes over his paintings, which contain smaller images of dwarfs, all covered by a gestural wash of white paint. Here the distinction between the abstract and the figural blur. While the figural elements make for quotable images, the folded and manicured felt references Herrera’s steel sculptures. These elements overlap, one obscuring the other in a sort of optical power play; each forces the other into a liminal state between modernism and postmodernism. This push-and-pull friction is the artist’s signature and sentiment: a hybridized, problematic and noteworthy self-critique that is challenging to negotiate, but far from indecipherable.