As Temperatures Drop, It's Tougher To Be Homeless in San Antonio

Photo by Michael Marks Mitch Baldwin, a Marine veteran, stands outside the VIA Centro Plaza.

After a couple years in Albuquerque, Fred Christa forgot how warm San Antonio's winters could be.

Christa is homeless. He's a San Antonio native who moved back to the Alamo City earlier this year. These days, he spends most of his day trolling through the downtown grid, up one side of the street then down the other, looking for food in trash and recycling bins.

Christa said police are more likely to ticket you for panhandling in San Antonio than in Albuquerque. But at least when he flies a sign in San Antonio, snow and ice doesn't cling to his beard like it did in New Mexico.

Though it may not be as cold as in other cities, San Antonio's homeless population still struggles to stay warm as the days grow shorter and the temperature dips.

Of the roughly 3,000 homeless people in San Antonio, more than one-third are without any kind of shelter, leaving over a thousand people on the city's streets each night according to the most recent count by the South Alamo Regional Alliance for the Homeless.

The day-to-day challenges of being homeless are amplified in the cold as seeking proper shelter becomes more important, and the body burns more calories to keep warm. And though hypothermia is rare in comparatively balmy San Antonio, it's still a potentially lethal threat. The Bexar County Medical Examiner ruled in January 2014 that Chris Jason Paine, a homeless man found under an overpass, died of hypothermia during a cold snap.

The temperature didn't drop nearly enough to risk hypothermia when I recently slept outside for this story. But the discomfort I felt in just chilly weather made sleeping in anything colder seem almost unfathomable.

Christa sleeps alone in an alleyway downtown. He said he doesn't have trouble staying warm, which is due in large part to a recent Dumpster-dive prize he scored behind a hotel: A queen-sized comforter streaked with magenta makeup stains. He thinks that's why it was thrown away.

"I just wrap up in [the comforter] and I'm good for the night," said Christa, clad in a couple of T-shirts and a tan jacket. Nylon and canvas bags dangle from his shoulders, filled with other things he's salvaged. "I like to be alone, I try to stay away from other people."

The best spots to stay on the street aren't literally on the street. The ideal location is somewhere warm, safe and where you're unlikely to be hassled by police or property owners.

Finding such a spot is tough in a world that's made for house dwellers. On the street, where everything is designed for mobility, convenience and impermanence, people can be protective of a prime sleeping place. 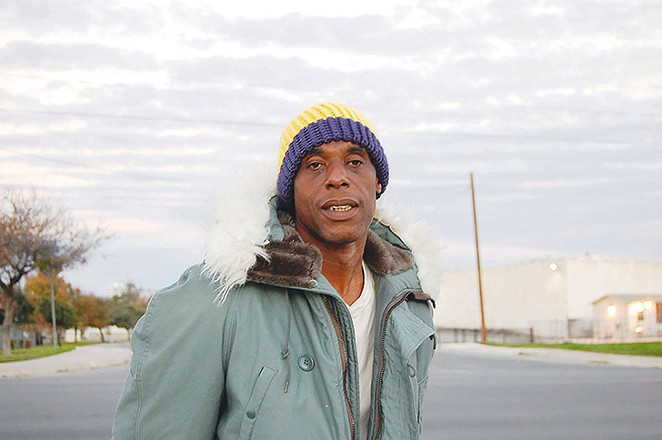 'It's Where They Want to Be'

Joe, a homeless man from New Orleans who wouldn't give me his last name, said he sleeps in a makeshift camp east of downtown, near an Interstate 281 overpass. He stays there alone, and he wouldn't let me see it.

Joe spends most of his day panhandling. He's got a husky smoker's laugh, and is prone to espousing both the power of prayer and 12 packs of Steel Reserve in the same thought.

"I pray for people to be generous, to be kind," he said. "I say 'Send me your angels God — the ones with the large denominations."

Joe will stay on the street even on the coldest nights. He used to go to Haven for Hope when it got too cold, though he rarely does anymore.

When the temperature drops below 45 degrees Fahrenheit, Haven for Hope staff allow people at Prospects Courtyard, the covered cement slab where people can spend the night without entering Haven's recovery program, to sleep inside. The campus can accommodate 585 people from the courtyard inside.

When that happens, staff opens up areas such as the cafeteria where people can sleep. They pass out wool blankets, knowing they won't get some back.

"We know that people keep them because they're out on the streets and it's cold. We don't really make a big deal out of it, but we're always in need of blankets," said Laura Calderon, a spokeswoman for Haven for Hope.

But even when it gets cold enough to go inside, some people prefer to remain in the courtyard, Calderon said. Joe doesn't go to Haven anymore because sleeping inside means waking earlier than he'd like. Those who sleep inside must mop the floor and rearrange tables so that the cafeteria is ready for breakfast.

The city is currently revamping its policies toward the homeless population, spearheaded by the police department. Chief William McManus, in conjunction with other city departments, is creating "impact teams" to bring services such as rapid housing and mental illness treatment directly to the homeless, rather than perpetually giving them tickets for offenses like camping and panhandling.

"Some of those folks, that challenge is you could give them a five star hotel room and they wouldn't want to stay in it. They'd rather be under the bridge somewhere," McManus said. "For whatever reason they're on the street. It's where they want to be. They don't want to go anywhere else. And as long as they're not breaking the law, they have a right to be there."

After spending a night on the street, it's hard for me to imagine such a mindset.

I parked at a Wal-Mart on Austin Highway and searched for a spot to sleep, criss-crossing parking lots and circling around strip malls. I bumped into others doing the same. An elderly man leered at me as he plucked cardboard from a dumpster behind an H-E-B. Another guy with a red Marlboro backpack that was missing a strap twice passed me as we walked down the street.

As I walked, I didn't feel afraid or vulnerable, but separated from the world around me. It's strange to see people in cars, people in shops, people in restaurants from the outside, and know that they have a place to be and a place to go. I could feel eyes on me as I walked around a laundromat with windows on three sides.

The homeless people I spoke to for this story suggested that I look for in-between places — borders of neighborhoods and businesses, the edge of parks, spots like that. I found one after walking the perimeter of a Lowe's parking lot, where a gap in a chain-link fence allowed me to get into a thin greenbelt between a row of backyards and a retaining wall upon which another parking lot sat.

I didn't see anyone for the rest of the night, though people clearly came through the spot. Cardboard pallets were wedged under the bare, shrubby trees and graffiti covered the wall in splotches. I curled up into a ball with my back to the wall, lying in the grass with my backpack as a pillow. I listened to yappy dogs bark at each other from their yards and hoped no one saw me.

It was chilly – about in the low 50s or high 40s, but I felt warm enough in an old hoodie and thin blanket. Sleep came, but not easily. I was cold – not freezing, but occasionally shivering.

It felt odd to try to fall asleep with my shoes on, but my toes were too cold otherwise. I tried to pull the hood of my jacket down as far as I could to limit exposure to my face. I slept in fits and starts, regaining consciousness suddenly due to a pain in my neck or a gust of wind.

I woke up for good in the wee hours, my nose cold, my hands burrowed deep inside my jacket's pockets. I packed up, walked back to my car, and drove to my apartment.

This is the reason that such an exercise can't replicate real homelessness, though. Even if I stayed out multiple nights — a week, a month, even more — I'd still know that in the end, I had a home to return to.

At some point I would get out of the cold. For the chronically homeless, the only real solution is to bundle up and wait until spring.