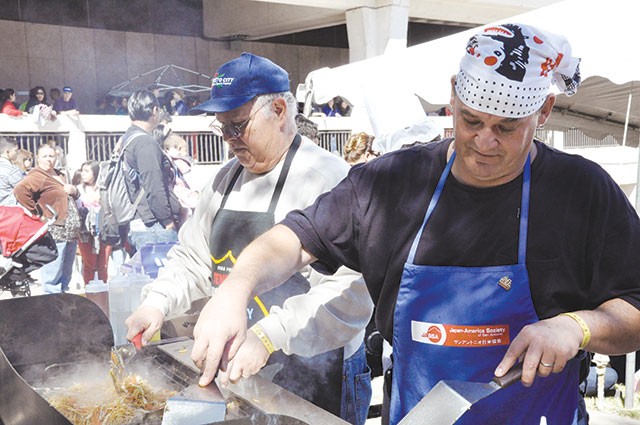 It’s the Year of the Horse and the Institute of Texan Cultures is celebrating like they have for the last 26 years–with another huge Eastern culture blowout via the Asian Festival. For its 27th year, the Festival expects to draw approximately 10,000 people to the Institute for a day of music, dance, fashion, crafts, trinkets, body art and, of course, food.

Tong’s Thai will be present for the seventh year in a row. The restaurant, owned by Syngman Stevens and wife Charassri Saeng-on (whom Stevens calls “The Bubble Guru”), will return with the ever-popular bubble tea booth. While the restaurant carries more than 40 tea combinations at its Austin Highway location, they hold back during the festival to expedite the process (still, you’re probably in for a wait).

New to this year’s line up is the Korean American Culture Center. Bea Adams, publicity manager for the KACC, shared her excitement for the group’s foodie debut, which includes bulgogi plates, rice and homemade kimchi, or fermented vegetables.

“The plate is pretty standard—every Korean is practically born knowing how to make these,” she joked. “Every family has their own version of these recipes that get passed on … but everyone cooks it slightly differently.”

The group will begin making their kimchi on Thursday, which involves shredding the cabbage and letting it sit with some salt to draw out the water. Prep continues the next day when the cabbage is added to other vegetables.

“The longer you let it sit, the better it tastes, but we’ve found that American tastes tend to prefer fresher kimchi,” Adams said, while adding that the kimchi “takes on a very pungent odor, which can be a little off-putting.”

BJ Patel, this year’s president of the India Association of San Antonio and a founding participant of the Festival, also serves dishes with an American palate in mind.

“We’ve partnered up with a few restaurants around town … We serve what’s popular to mainstream Americans in San Antonio,” Patel said.

The India Association usually serves up classics such as eggplant dishes, chickpea curry and chicken tikka masala and also adjusts the heat level during these events. “We try not to make everything so spicy during these events because our main goal is to introduce people to the type of food. Indian [cuisine] is known as really spicy, hot food, where you’ll put it in your mouth and die, but it’s totally a myth,” Patel said, though he mentioned that condiments will be available to spice up any dish.

Myth or not, Eastern cuisine continues to take SA by storm year-round. As Patel puts it, San Antonio has always been a melting pot of cultures, but the recent Asian eatery additions point to an interesting trend. Viva Pho (2114 NW Military), Pho Fresh (2895 Thousand Oaks), Pho Kim Long (4029 Spring Mountain) and Thai It (7914 Culebra) all opened up within a year of each other. That’s not counting the various Asian-flavored joints newly opened or coming soon from SA names that first won success in the American and European categories.

Chef Michael Sohocki’s Kimura has been inundated with ravenous ramen lovers since its doors opened. David Gilbert’s Tuk Tuk Tap Room focuses on providing authentic Thai and Vietnamese fare, while Jason Dady’s early tagline for recently opened Umai Mi was “so not authentic, its absurd” [sic]. And then there’s Hot Joy, the little pop-up that could (opening in mid- to late February), which takes a different approach altogether. Located inside the original Rosario’s and former China Latina at 1014 South Alamo, Hot Joy’s permanent location can seat 110 people and includes a lineup of cocktails created by The Brooklynite’s Jeret Peña.

“I think people responded pretty quickly because of the informality of it,” Chad Carey, co-owner, said of the warm reception given to Hot Joy as a pop-up, also noting the resto’s simpler plating and modest price points.

Hot Joy’s revamped menu will include favorites from the pop-up’s time at the Monterey along with several new items including a tater tot chaat—a savory combination of paneer, miso gravy, tamarind ketchup, small crunchy noodles made of chickpea flour (or sev) and cilantro.

“Chaat is one of those things I’m so excited about because there’s a million different things to do with it,” said Hot Joy chef Quealy Watson.

As for competition, Carey put it best:

“If a city of 2.3 million people can’t support Tuk Tuk, Kimura, Hot Joy and Umai Mi, then fuck us, what are we doing?”

Consider that as you nosh Asian offerings from more than 11 different vendors during this year’s festival.