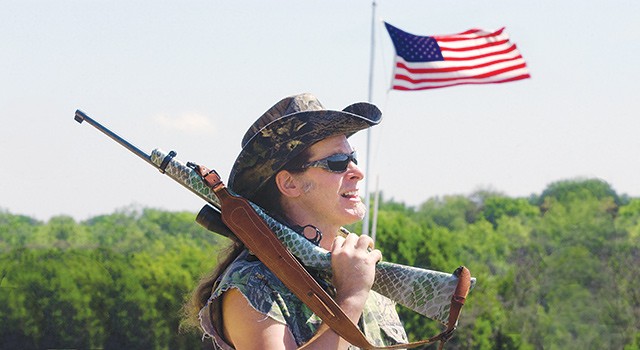 Once and for all, here’s the meaning of “the right to keep and bear arms.”

“They’re mine, you can’t have them, and I got some on me right now — and they’re loaded.”

Yes, that’s Ted Nugent speaking on Assaulted: Civil Rights Under Fire, a Kris Koenig-directed documentary funded through Kickstarter and opening June 20 independently (in San Antonio, it will be at Santikos Northwest 14 Thursday through Sunday).

“You have the right to own a gun, and I have the right to not own a gun and still feel safe in our society,” says another man, an opponent to unregulated guns. But, in spite of its efforts to present itself as an “objective” take on the issue, Assaulted implicitly claims that “Second Amendment rights” are worth anyone’s death.

The film deliberately touches a nerve using footage from Katrina- and Rodney King-era lootings as examples of people defending themselves (or who could’ve defended themselves) with guns, but says very little about accidental weapon discharges or good samaritans missing their target during a shootout. Sentimental images of the original “We the People” page of the U.S. Constitution flash on the screen repeatedly, and the whole film perpetuates the idea that, if given the chance, the government will take all your guns, not just assault and semi-automatic ones.

Fox News footage of New Orleans resident Patricia Konie, an elderly lady attacked and injured by a California Highway Patrol officer who was assisting after Katrina and took her gun, and the similar plights of those whose weapons were confiscated in the hurricane’s aftermath, are shown as proof that not only could the government take your guns — it already has.

In all cases, gun owners are portrayed as “responsible” and straight-faced talking heads claim that “gun crimes are actually down” in this country, as if that was reason enough to dismiss Columbine or Newtown as aberrations, and that the Second Amendment should be interpreted as an unavoidable principle meant to allow most anyone to easily buy a gun, even if that means some idiot will murder a kid in school. Needless to say, there is virtually zero time devoted to the low crime rates in countries with strong gun laws (it’s not about saving lives, it’s about “freedom,” you fool), and the movie’s main message is that not only would it be unconstitutional to limit gun ownership in America, but useless. The usual argument is repeated here: criminals will always have guns, one way or another.

But to dismiss the movie in its entirety would be a mistake, since it raises interesting points about the origins of the Second Amendment (it was a way to keep blacks and other minorities under control by not allowing them to arm themselves, an aspect seldom mentioned by Second Amendment preachers), and, on the flipside, convincingly describes guns as “the great equalizer,” giving women and the elderly a chance to be on equal terms with an attacker. What it does not do: persuade the audience that a simple pistol is not enough — you need a machine gun. The debate continues and the movie will only fully please those with a strong pro-gun ownership position, a group that could earn new converts out of the undecided bunch.

No matter which way you look at it, the real choice is simple and has always been the same: it is a choice between limiting civil rights in the name of public safety or risking the latter in the name of the former.

Some think the risk of losing a life (even if it’s a child’s) is the price you pay for “freedom.” Some of us are not so sure.