At First We Were Totally Behind This San Antonio Waffle House Campaign, And Then We Weren't 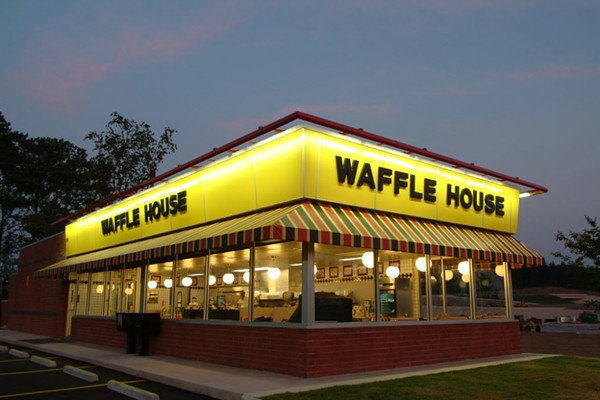 A new Twitter campaign created this week is trying to bring Waffle House to San Antonio.

The 24-hour, classic diner chain is an icon of Southern United States, boasting over 2,500 locations in 25 states. If you've never heard of it — and let's face it, you've heard of it — it's kind of like Jim's but more quaint and American. The company's restaurants have served over 800 million waffles and 1.6 billion strips of bacon since the first restaurant opened up in 1955 in Avondale Estates, Georgia, according to its website. To put it another way, Waffle Houses dish out 145 waffles and 341 strips of bacon per minute.

The diners are so ubiquitous and reliable that the Federal Emergency Management Agency (FEMA) uses an informal Waffle House Index to determine the necessary scale of recovery efforts following disasters such as hurricanes and tornados. This Wall Street Journal article explains how it works, but basically if a Waffle House is serving a full or limited menu after a disaster, then everything will be all right. But if a location is closed, then shit just got real.

The are over 100 Waffle House restaurants in Texas. The two closest locations to San Antonio are over 70 miles away in North and South Austin.

One local die-hard Waffle House fan wants to change that. The twitter account WaffleHouseInSA is using the social media site to campaign for an Alamo City location, and it's galvanizing the public's interest by using the hashtag #WaffleHouseReady. Already twitter users are responding, presumably because of their unfulfilled waffle needs.

2100 locations in 25 states but none in San Antonio yet?! Come on @WaffleHouse we are #WaffleHouseReady !!

Why ain't there a waffle house in San Antonio? We Shouldn't have to settle on IHOP..

The campaign is even asking for the support from Mayor Ivy Taylor, which is funny, because the number of San Antonians who get behind this campaign will probably exceed the number of people who voted in the mayoral election, because waffles.

At first this was a campaign we could totally get behind. Why? Because waffles are delicious and amazing and rank high in the hierarchy of breakfast foods. But then WaffleHouseinSA started hating on migas.

What did migas ever do to you, WaffleHouseSA? Migas are delicious, and you should be building allies for your cause, not alienating other breakfast champions. There is no reason to scapegoat migas just because San Antonio lacks a Waffle House franchise.

We've reached out to WaffleHouseInSA and Waffle House for comment, and we'll let you know when we hear back.

In the meantime, I'm going to IHOP. Why? Because San Antonio doesn't have a House of Pies.