At Home At My Friend's Backyard 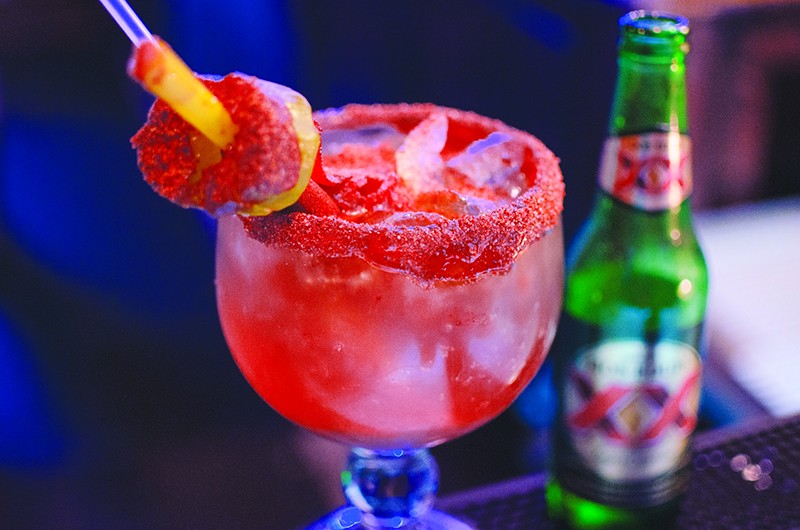 It was on a particularly sticky San Anto evening about two years ago when I witnessed a patron run into the middle of a small and sweaty crowd and "make it rain" on the dance floor. Fresh-pressed dollar bills, maybe 20 or 30 of them, flurried down to the floor as wildly manicured hands grabbed at the air. The Spandex-clad dancers twerked their way to the floor, grabbing any spare singles that made it through the sea of hands.

It "rained" a few more times that night before our party left.

That was Bar Central (formerly Da Traxx), where a pat down was required for males, and VJs played the latest club hits on weekends. Plush couches lined the bar's left side, wonky mirrors, bright strobe lights and a water feature commanded the attention of bar goers. Doors at Bar Central closed last year, but the space reopened in early April as My Friend's Backyard and so far, the scene has decidedly taken a pleasant turn.

For starters, the bar underwent a massive outdoor makeover. Instead of a gray, urban landscape west of the railroad tracks that cut through San Pedro and Hildebrand, the bar is surrounded by a newly built patio that wraps from front to back with all kinds of outdoor games sprinkled throughout. Large wooden spool tables and pallet furniture fill the gravel-lined venue along with dartboards, giant beer pong and a basketball hoop for practicing those alley-oops. More pallets line the exterior back wall, which is laced with twinkly lights. A set of five chain-link wooden swings have been added to the back, opening up even more seating. It's quaint and rustic and somehow the same bar where some asshat rear-ended my car on my last visit?

If you were a fan of the previous interior decoration, fret not. The old shower water feature is still around, apparently a favorite of one of the owners. And the wonky mirrors are still there, though the focus now is sports and a convivial spirit. This was evident during last week's Spurs playoff game when 30 or so fans decked out in jerseys and team shirts filled the venue to watch the late-starting game on one of the joint's 10 flat screens.

Though the sound system experienced a fairly major hiccup during my visit, no one seemed to mind. The drinks — I'll get to these in a second — kept flowing. A dart tournament kicked off at around 10:30, with several participants trying their luck at the boards while the crowd stayed lively as the Spurs kept swapping leads with the Los Angeles Clippers.

The beer offerings were simple. Modelo, Ziegenbock, Bud Light and a cider were featured on draft, while big name domestics and imports were available in bottles. In an effort to class up the joint, ice-cold beer is served in Mason-esque jars. Frozen margs out of an industrial-size machine were on special that evening for $2. Though I opted for an additional pour of raspberry syrup, my advice is to stick with the regular recipe that's tart and sweet enough without it.

The real stars of the show, though, were the two drinks bartenders have been working on since the place reopened. It would make sense for the bar that's moved right across the street from Frozen Fridays (this year's second place winner for Best Raspas in our Best of San Antonio issue) to cater to its chamoy-loving audience.

One of the drinks, La Loca, was a Franken-tail of a beast that combined a little of everything. Vodka, pickle juice, sour mix and watermelon Pucker made for a mouth-twisting sip, and the chamoy and chili powder-rimmed glass was a nice touch.

The other drink, a yet-to-be-named concoction served in large fishbowl glassware, was equally sour-filled. It was basically a chamoy-based michelada with sour strawberry tape, adorned with a tamarindo stick and topped with an inch-long chunk of dill pickle.

I may have spent $10 the whole night, but I was in great company with fellow Spurs fans watching a nail-biting game and enjoying the new, safe and tempered sports bar that's replaced loose dollar bills with sour candy in their drinks.