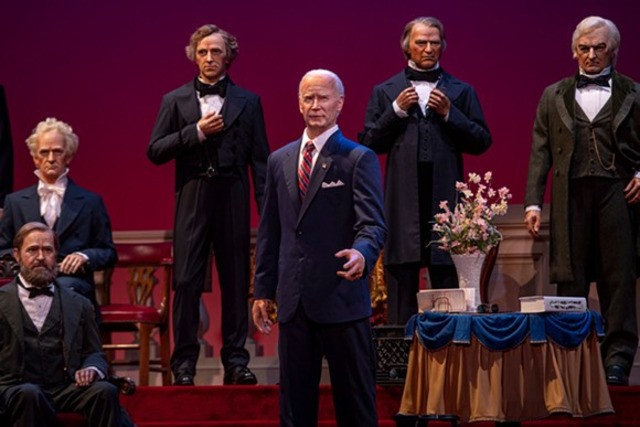 It's finally happening, the moment an exhausted country of Disney adults has been waiting for since November. Donald Trump's bizarro Clinton animatronic will recede back into the milieu of former robot presidents as Joseph Robinette Biden, Jr. takes center stage. A nation exhales between bites of Dole Whip.

Walt Disney World unveiled their first look at Biden's unkillable presidential machine in a post to their official park blog. And it looks quite a bit more like the current commander-in-chief than Trump's allegedly slapdash nightmare.

We'll likely never know if this built-back-better bot came out right due to political leanings of the design group or Biden's more pleasing appearance.  Maybe the Imagineers got their hands on some of the uppers they slip in Biden's ice cream whenever he needs to give a big speech. Either way, this new robot comes with a layer of gloss that was absent in previous attempts. Holding up robo-Biden to mecha-Trump is like comparing Biden's current hairline to old CSPAN footage.

In addition to the new animatronic, Biden-specific artifacts have been added to the exhibit. A pair of aviator sunglasses are prominently displayed. Peach blossoms reference Biden's home state of Delaware. Presumably, they went with flowers because the single building that's home to 300,000 corporations is too difficult to represent visually.

The park noted that the new, improved(?) version of the Hall of Presidents would open in August.

This article first appeared in Orlando Weekly, an affiliated publication.