After having survived the myriad delays that seem to plague any ambitious project these days, Hotel Emma at the Pearl is opening to the public on November 12. And it must be admitted that after 121 years — and a massive makeover of reality-show proportions, the old girl is looking pretty spiffy. Built as Pearl’s brew house by beer baron Otto Koehler, the building presented its unique challenges in transitioning from grain and hops handling to hospitality; the no-two-spaces-alike aspect makes for marvelously quirky room layouts, as a hard-hat tour about a month ago made clear, but it’s easy to imagine designers and builders being driven to distraction. Fortunately, the newly built annex housing additional rooms, suites and meeting spaces was construction of a more conventional sort — not that you’d immediately know that; the seamless transition between old and new has been skillfully managed.

Without a staycation splurge, most of us won’t have occasion to spend the night in the gothic Hopper Suite underneath the brew house’s signature crown. We’ll also be missing the Dos Carolinas robes, the minibar thoughtfully stocked with local products … But we can take full advantage of the steampunk meets South Texas chic spaces that are open to the public — starting with the jaw-dropping lobby dominated by the ghosts of giant generators and lit by equally grand, bespoke light fixtures. There’s no room key required to visit the equally spectacular Sternewirth for a drink, to sit for a plate at Supper or to check out the displays of to-go provisions at Larder. Like Dolly Levi (the tenacious heroine of Hello, Dolly!), we’re betting that this Emma “will never go away again.”

Do not be deceived: Supper is also open for breakfast and lunch. I haven’t yet experienced the space at namesake night, but during the day it’s luminous, with pickled German chestnut floors, white porcelain-enamel panels and an array of schoolhouse lights all combining to create an airy atmosphere that suggests an equally light touch with cuisine. Accordingly, chef John Brand, most recently honcho of La Mansion del Rio’s kitchen, has created menus that are heavy only in thoughtfulness. Breakfast might bring delicate, dusted beignets or lemon ricotta pancakes; look at lunch to a pickled green tomato BLT, or roasted chicken with “simple roasted market vegetables.” 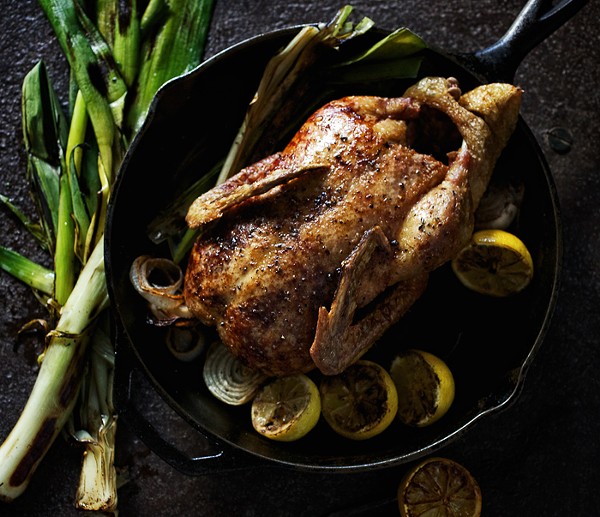 Dinner at Supper offers white anchovy beignets with dandelion salsa verde, sardines with fennel, celery and Dungeness crab, and venison loin with juniper and blueberry mustard. Brand was an early pioneer of provisioning from farmers markets, and now at Pearl he’s even closer to a significant source. But “we’re not trying to be totally farm-to-table … the menu will evolve slowly with the seasons [and with chef-ly whim] but we won’t be confined to a ZIP code,” says Brand, who wants to be able to play with ingredients such as Wisconsin cheddar and Italian ricotta salata and spices such as sumac and the French/Indian blend vadouvan that aren’t part of the knee-jerk local canon. Insider tip: Reserve the banquette facing the open kitchen with its massive stainless and brass hood.

Sorry Paramour: For one brief fleeting moment, you were the bar-belle with the most active dance card — and you still have the edge on views. But the eye doesn’t lack for places to light at Emma’s bar. From the giant fermentation tanks that have been converted to surprisingly intimate seating cubbies to arrangements of massive leather sofas astride oriental rugs and a bar whose top was fashioned from a preserved tree trunk unearthed at the site — or so the story goes — there is almost too much to take in. Best to come sit in a different place each time to get the full picture — and to concentrate every time on a cocktail menu put together by manager Mike McKinney (most recently at nearby Blue Box) and his co-conspirator Jessica Lavalle. Expecting guests “from around the world,” McKinney says there will be more emphasis on service and consistency than “hey, we’re putting on a show.” To which Lavalle counters “but we also want personality — not robots.”

Nevertheless, bartenders will wear uniform chef’s coats and dark jeans as they sling cocktails the likes of The Three Emmas, a gin-based, booze-fueled drink based on an even juicier story of Otto Koehler, three women, infidelity and mayhem. Eschewing drama, chef Brand has put together a bar food menu of items that can actually be eaten while sitting on a deeper-than-Dixie sofa. Smoked dates with blue cheese and bacon fit that bill perfectly.

Mariah Lange’s local credentials include involvement in the late, lamented Oloroso (now Feast) and in running her own catering company. She says that she had long contemplated developing just the sort of gourmet provisions operation that is Larder — and now she has the full faith and credit of Emma behind her. Insofar as possible, says Lange, “We’re looking at local artisans [such as the makers of Shrub Drinks], regional stuff, thoughtful products with a backstory.” Part of her intended audience at the small but dramatic boutique will naturally be hotel guests and residents of nearby condos and apartments, but “we are one of [the hotel’s] operations with the most public access, so we automatically become a kind of ambassador.” Her food diplomacy includes a list of pressed sandwiches (wood-grilled lamb with labneh), cold sandwiches (duck confit muffaletta with goat cheese), as well as salads prepared by the Supper kitchen. “We’re not a café [though there will be a couple of tables inside and more outside], so everything will be packaged to go” — maybe even slipped into baskets that can be attached to one of the hotel’s loaner bicycles (Electra cruisers) available to guests. Lange has also curated a modest selection of wines and beers and, with the help of Local Coffee’s Merit Roasting, will operate a coffee station making use of beans grown especially for them in Nicaragua.

Everybody I know wants Hugh Daschbach’s job — even if we can’t exactly define it. We all know that a conventional hotel concierge secures theater tickets, wrangles difficult restaurant reservations … but the culinary equivalent? Daschbach was one of Emma’s first hires, so he’s had some time to figure this out. A New Orleans native and Trinity University grad, Daschbach got his first taste of one side of the hospitality business helping run Trinity’s office of conferences and special programs. After a brief detour in the environmental industry, he was looking to get back into hospitality and was serendipitously offered an interview at Emma. The position had been envisioned but not fully defined. Perfect. “So the idea is to invite our favorite parts of the city into the hotel … to expose the guests to what we think of as the ‘real’ San Antonio.” The chefs, he says, have a printed menu of dishes, but “I have more of an activities list — I’m curating experiences different from a guidebook.” So, from a typical upcoming week: Tuesday — Daschbach demonstrating oyster shucking in the lobby; Thursday — author and cultural anthropologist Sherry Kafka Wagner discoursing informally on her book collection in The Library; Friday — Chris Waters Dunn discussing his new enchilada book and maybe teaming with Cappy Lawton for a demo. But not everything will be in-house. “We’re catering to the well-fed and the well-read,” says Daschbach, and these folks aren’t afraid to get out and get their hands dirty. (We both blame Anthony Bourdain for some of this.) So, the program will evolve in step with guest response. The job, too, as it now sounds like culturo-culinary concierge. Now I want it even more.