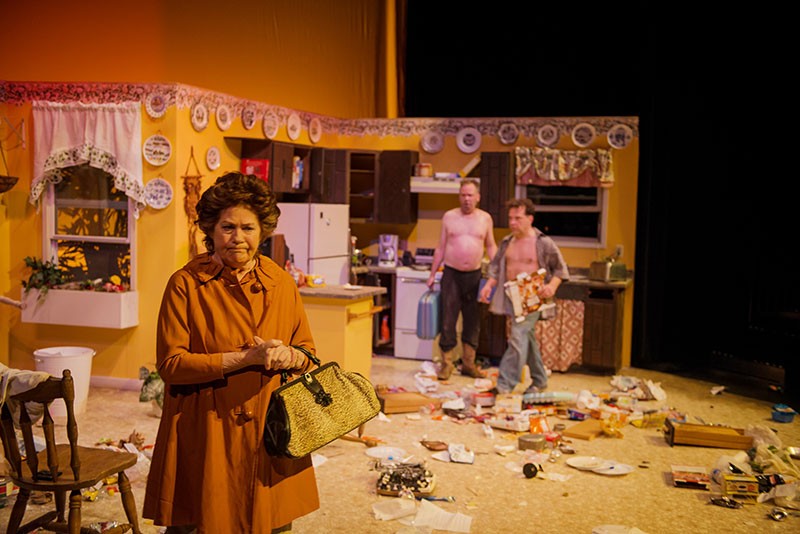 Typewriters are now almost as scarce as eight-track tapes. So when Andrew Thornton, playing a manic vagrant named Lee, proceeds to demolish a manual typewriter by repeatedly smashing it with a golf club, it is tempting to alert the Environmental Protection Agency to a violation of the Endangered Species Act. Are there enough typewriters in Bexar County to supply all nine performances of AtticRep's current production of True West?

But a typewriter is not the only casualty in Sam Shepard's ferocious drama of savage sibling rivalry. By the end of the play's second — and concluding — act, the tidy kitchen in suburban southern California that was designed by Martha Penaranda and is the sole setting for the proceedings is reduced to shambles; its house plants are dead and its linoleum floor is littered with broken dishes, empty bottles of booze and mangled pieces of toasted bread. The mess is a metaphor for the tumultuous relationship between Austin and Lee, two brothers who have not seen each other in five years.

At the outset of True West, Austin has left his wife and children to take care of his mother's house while she is off visiting Alaska. Industrious, bespectacled, dressed in a sweater vest, Rick Frederick's Austin is an exemplar of hard work ethic. And his work is writing screenplays. In the opening moments of the play, he is laboring away at a script, oblivious — or pretending to be oblivious — to the intrusion of his brutish brother.

But it is hard to ignore Lee when that crude hulk is guzzling, belching, drooling and even urinating onto one of Mom's precious houseplants. The two brothers seem a study in contrasts, an odd couple who happen to share some DNA. Austin, a respectable Ivy League graduate, is the kind of son any mother would be proud of and trust her home to. But Lee is an uncouth and unpredictable bundle of violent impulses. Clothed in a filthy raincoat, he has just returned from three months alone in the desert. He makes ends meet by burglarizing the homes of innocent people. Nevertheless, Lee tells Austin: "I could be just like you." And, at the beginning of Act Two, he is.

After Lee cons Saul Kimmer, played by Guy Schaafs as a preening, unctuous Hollywood producer, into buying his hokey ideas for a Western movie and giving up on Austin's film project, Austin degenerates into a slovenly sot. It is Lee who assumes responsibility for producing a marketable script. But, since he lacks the skill to shape his inane vision of a deadly chase in the Texas Panhandle into a text, he demands that Austin do it for him. The two brothers become locked into a struggle of co-dependence and mutual enmity.

Since its premiere in 1980, True West has become a staple of contemporary theater. The parts of the two brothers have attracted some formidable actors, including Philip Seymour Hoffman and John C. Reilly (who alternated roles during the same Broadway run); Tommy Lee Jones and Peter Boyle; Dennis and Randy Quaid; John Malkovich and Gary Sinise. AtticRep's production reconfigures the version it mounted in 2008 at Trinity University's Attic Theater for the dimensions and demands of the new Tobin Center. Except for the part of Saul, the seasoned cast remains the same. The performances are particularly physical, as if inspired more by World Wrestling Entertainment than the Royal Shakespeare Company. Thornton and Frederick are constantly grappling, writhing and clenching. Each spends as much time on the floor as in a chair. Most of what director David Connelly, himself a frequent actor for AtticRep, had to do was to choreograph kitchen combat.

Played with loony primness by Rita Crosby, Mom makes a surprise entrance at the end — less as a deux ex machina to resolve the plot than a droll foil to emphasize the final disintegration of a ferociously dysfunctional family. This is very much a man's play, which, through the clash of two proud, grubby men, interrogates familiar notions of masculinity. It also uses its misdirected characters to mock the most popular direction in American culture: West. "There's no such thing as the West anymore," Austin tells Lee, who attempts to write and live out a fantasy of frontier individualism. One of Lee's most extended monologues recounts the plot of Lonely Are the Brave (1962), the contemporary Western that concludes with the death of the Western ideal, when renegade cowboy Kirk Douglas and his horse are hit by a truck while trying to cross a highway. The stories we concoct about rugged, self-reliant pioneers point to a West that is no more true than the North to which our compass needles point.

The year that True West premiered, about 20 percent of the U.S. population changed residence. The play examines the rootlessness of Americans — the illusion of independence and freedom we cherish, as well as the reality of solitude and loneliness that often ensues. In Shepard's vision, ours is an unsociable society. For a couple of hours, though, this electric production of his play by AtticRep creates a community of shared admiration.