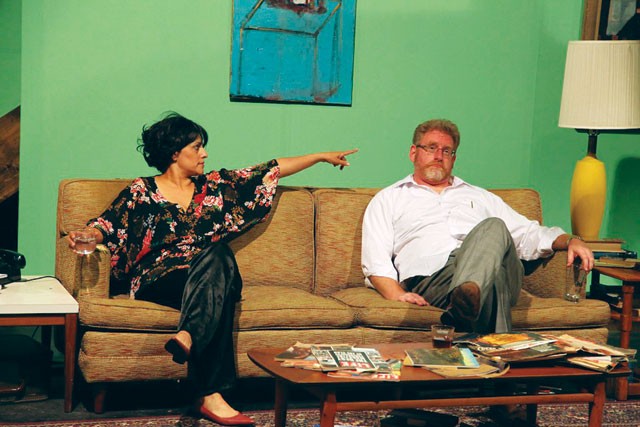 Families fare badly in Western drama. Oedipus kills his father, Lear's daughters connive against one another, and Ibsen's Nora walks out on her husband and their three young children. But in 1962, Edward Albee introduced a fresh horror — beyond patricide, sibling rivalry, and desertion — into the family romance: nastiness. Early in his most famous play, unsuspecting guests enter a home to discover their hostess, Martha, shrieking at her husband George: "Fuck you!" The profanity and sexuality in Who's Afraid of Virginia Woolf? convinced trustees of Columbia University, executors of the Pulitzer Prize, to overrule their drama jury and deny Albee's work an award. The text was expurgated for stage production as was the 1966 screen version starring Elizabeth Taylor and Richard Burton.

A maestro of misanthropy, Albee anticipated David Mamet, Sam Shepard, Neil LaBute, and other playwrights in the use of savage dialogue as an agent of biological warfare. After five decades, audiences have become accustomed to intimate acerbity, and the 50th-anniversary production of Who's Afraid of Virginia Woolf? scheduled to open on Broadway in October, will surely be as nasty as it wants to be. So is AtticRep's glorious, uproarious new production, currently on stage at Trinity University. "I have no sense of humor," says Martha. But, from the early moments, when coins tumble out of George's trouser pockets and Martha brays: "I don't bray," it is evident that Albee, director Roberto Prestigiacomo, and the superb foursome he has cast know exactly how to make us laugh and why.

Following a faculty party at New Carthage, the small New England college where Martha's father is president and her husband is an under-achieving professor of history, Nick, a promising young recruit in biology, and his simpering wife Honey are invited to what turns out to be a conjugal brawl. Confined to the disheveled house that George and Martha call home ("What a dump!" Martha exclaims), the proceedings in the three-act play begin at 2 a.m. (In the cozy Attic Theatre, a spectator can notice the actors' watches set to stage time) and, lubricated by a constant flow of booze, conclude about three hours later. Nick and Honey are in effect audience to a tortuous, torturous play improvised by their appalling hosts, and the real audience is drawn in to share some of the outsiders' curiosity, skepticism, empathy, and outrage.

As George, David Connelly literally throws his weight around the room. Loosening and tightening his belt above a shameless paunch, he hectors the others in a W. C. Fields lilt that advertises superior sophistication even as it betrays self-doubt. His wife is there to remind him that he is a professional and personal dud. Gloria Sanchez-Molina, who seems born to play Martha, is all the more impressive in that she inherited the part barely three weeks ago when a family matter forced the original Martha to drop out. "I'll make you sorry you ever gave up on yourself," Martha tells George, whom she hates and loves in equal and inseparable measures. Sanchez-Molina creates a character who is by turns — and sometimes at once — frowzy, cunning, seductive, and pathetic. Nick becomes the target of her erotic wiles, and Brad Adams peels through the layers of that ambitious academic upstart to reveal a man whose disdain for others' lunacy leads to his own humiliation. Sarah Nixon's Honey is a witless, childish wife who cannot hold her liquor, but, like Martha, she snared her man dishonestly and now must learn to live with him.

The final production in AtticRep's sixth season, Who's Afraid of Virginia Woolf? is fitting culmination to the company's triptych of domestic malice that began with Michael Weller's Fifty Words and continued with Yasmina Reza's God of Carnage. Behind the hilarious nastiness lurks elemental fear — less of Virginia Woolf than loneliness, failure, and death.

Who's Afraid of Virginia Woolf?