Live Harvey McLaughlin & the BottomFeeders are reminiscent of a pair of low-sole Creepers, Army-issue Buddy Holly glasses and a two-tone blazer over a skinny tie. (I'm describing Elvis Costello here). The limber wrists of drummer Mike Chia and the present but non-intrusive bass of Juancho Luna, coupled with McLaughlin and rhythm guitarist Trevor Schultz's noodle leads and flash distortion, keep the group in Attractions territory. However, their Dragon's Breath single is a gamey collection of three driving punk 'n' roll tunes.

A-side, "Dragon's Breath," even allows them to sneak into Midwestern planes with several trips through a '90s-inspired lesson on how to write spirited hook after spirited hook. With an impressive array of emotion, "Dragon's Breath" is a perfect track for reminiscing on your crush at the library — you both reached for the same copy of The Drunken Boat, you noticed he had a biography of Patti Smith and the Central branch's CD copy of This Year's Model tucked between his cardigan-clad arms. By then, the chorus is stuck in your head, "A little bit of dragon's breath and blah blah blah blah blah blah," or what sounds like, "A little bit of dragon's breath is gonna burn this whole place down." I think I got it.

The B-side could be labeled the "night owl side," if you wrote "night owl side" on it with a marker. The opener, coincidentally titled "The Night Owls," and "Splashpage" are the more aggressive of the three tracks. Whereas "Dragon's Breath" is a compelling jaunt through communal, friendly rockage — a station wagon tour anthem — side two is a last call shot-and-beer combo of tightly executed drink-rock in the vein of Hot Snakes, The Stooges, MC5 (you gotta spin more than "Kick Out the Jams," friend) or Denton via Austin's Riverboat Gamblers.

All in all, here are three well-executed, shitty-in-a-good-way rock 'n' roll tracks fit for wherever you listen to dirty but sincere guitar rock ... The library?

Kicked Out of Eden // Saustex Records

Javier Escovedo comes from a Mexican immigrant family that, without hesitation, adopted rock 'n' roll as its official tongue. Javier and his three brothers, including Alejandro of The Nuns and The True Believers (also with Javier), all found themselves called to music. After founding the important but short-lived underground California punk outfit The Zeros (1976), Javier played roots-rock with Alejandro and released a slow trickle of The Zeros' singles until 2012, when he dropped his first solo album City Lights.

In January, Escovedo released his second solo affair, Kicked Out of Eden, and will celebrate the album in San Antonio this weekend (Saturday at Hi-Tones with Harvey McLaughlin & the BottomFeeders and Sunday at Tex-Pop). The album is one part boogie-woogie-blues and one part garage-punk sweat and stone. That is to say, the record sounds like it was practically intended for San Anto audiences, with all its vamping bluster and romantic bravado.

From start to finish, Kicked Out of Eden is a solid exercise in sharp-edged rock. Album standouts "Beaujolais" and "Gypsy Son" serve as fine examples of the kind of straight-ahead punk-lite swagger that is Escovedo's real strength. Meanwhile, "Searchin' for You," a slow-burning ballad and the album's closer, is the only moment that let's up on the gas, but it certainly doesn't hold back on the melodrama, which is, for my money, another endearing hallmark of the whole album. — James Courtney 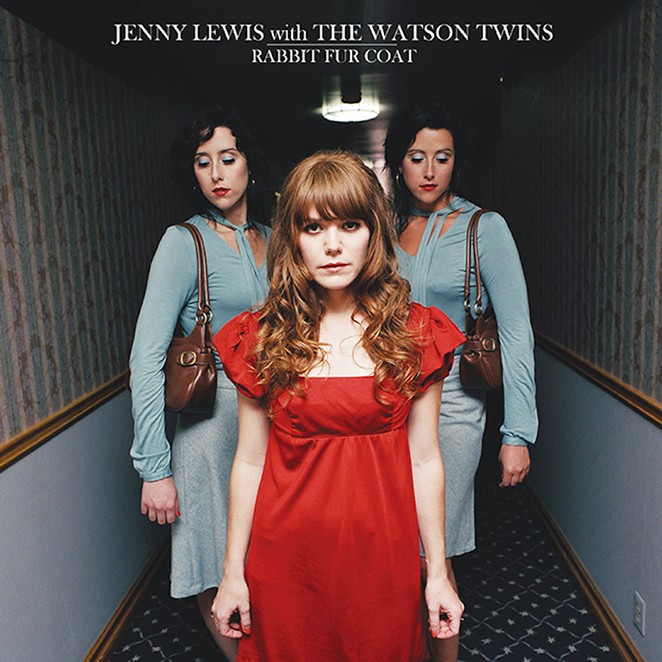 Jenny Lewis and the Watson Twins

When Jenny Lewis dropped her first non-Rilo Kiley album back in 2006 fans rightly feared that it signaled the end for the seminal indie rock outfit. Indeed, the glitzy, riff-rockin' Under the Blacklight, released in 2007, was Rilo Kiley's final (and worst) album. Lewis' Rabbit Fur Coat, with stunning vocal assists from The Watson Twins, thus stands as a musical document of a moment. Nothing Lewis has done since has the righteous fire, the dry wit, the songwriting grace or warmth of this first solo outing. In fact, her two solo albums since seem much more like follow-ups to Blacklight.

Rabbit, re-released digitally and on vinyl to commemorate the album's 10-year anniversary, is really a folk-soul revivalist statement. From opener "Run Devil Run" to the achingly gorgeous and slow-grooving "Happy," to call to arms "Rise Up With Fists!" and the gospel-indebted send-up "Born Secular," Rabbit feels very much like an agnostic's sermon on living the righteous life. This is Lewis stating her terms to life and its expectations, large and small. As such, there are lyrical passages that have been criticized for being a touch ham-handed or inscrutable, but the messages of existentialist free will and feminist refusal to play the good ol' boys game are indelible and vibrant still.

Resplendent with soaring and breathy harmonies, and seething with irony and coming-of-age angst, the album has aged exceedingly well. From where we sit now, Rabbit stands as one of the finest works from one of the finest millennial songwriters. — JC