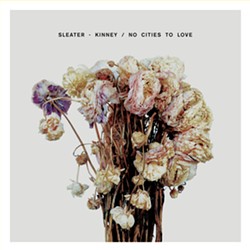 After a decade in hiatus and new projects from Portlandia to Drumgasm piling up, a Sleater-Kinney reunion seemed unlikely. And yet we’ve got No Cities to Love, a thoroughly excellent return to form that proves the band hasn’t missed a step.

At a lean 10 tracks, there’s a no-bullshit attack to its approach that aims to accentuate each member’s key talents. Drummer Janet Weiss still makes herself essential in subtle ways (check the half-time switch up on “Bury Our Friends”). Carrie Brownstein still writes guitar lines as well as she does hipster jokes (the lead on “Fangless” ranks as one of her fiercest). And Corin Tucker just sings like she’s been waiting 10 years for the chance, injecting each track with a vitality almost always missing from these sorts of reunion records.

Track for track, the batting average isn’t quite as high as ’05’s The Woods or ’97’s Dig Me Out. But when they do knock it out of the park, as on the obvious anthem “No Anthems” or the shuffling “Surface Envy,” there’s no question Sleater-Kinney hasn’t lost an ounce of power.