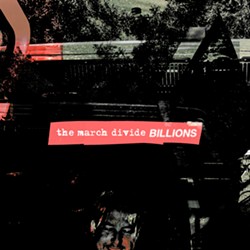 When the word emo is muttered in 2014, it often comes with a negative connotation. The post hardcore subgenre is often associated with the lifestyle of skinny jeans, comb over artificially dyed black hair and Livejournal accounts, instead of the influential bands that helped establish the sound, like Jimmy Eat World and American Football. Instead of dwelling on the past, The March Divide looks to the promising future of emo-influenced indie rock, with the new album Billions cementing that status.

Like Pinkerton-era Weezer, SA's Jared Putnam effortlessly pumps and inflates intimate coffeehouse lyrics with power pop choruses and hooks. Think of it like an intimate diary given the rock ‘n’ roll treatment with a good dose of punk to kick it up a notch. Part of the Dead Letter Records family, The March Divide maintains an indie vibe instead of cleaning up for a cash grab, a gem stone among the hard rocks.

On their most solid effort yet, Billions improves on their last two albums Music for Film and Music for Television, showing increased sophistication and lyrical maturity. And who would’ve thought that folk punk would make an appearance on a song like “Rewind,” the violin and folksy harmonies reminding us of their proud Texas roots while putting a fresh spin on their usual guitar driven rock.