by Travis Buffkin and James Courtney 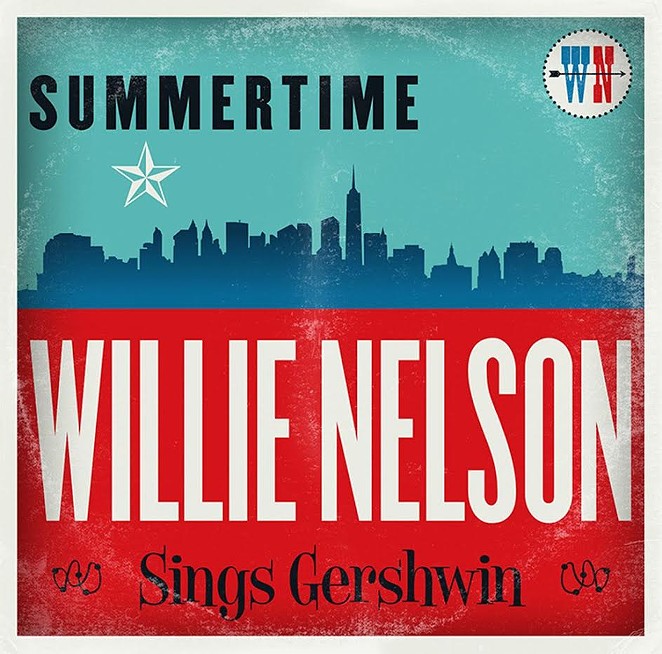 As the first country singer to receive the Library of Congress Gershwin Prize for Songwriting, an honor held by only seven other artists in the world, it makes sense that the Abbott, Texas native with the blood of the land in his voice should release 11 Ira and George penned tunes. Naturally, what first comes to mind is Stardust (1978), a collection of Tin Pan Alley tunes produced by Booker T, and Willie's commercial breakthrough, containing "Georgia On My Mind," "All of Me" and Gershwin's "Someone to Watch Over Me," the latter being revisited on Summertime.

Those that are familiar with Willie's canon, which is not a smoking device patented by the eternally lit octogenarian, know that the nasal master of phrasing has been doing all kinds of tunes his way for decades, not just country. Nelson has committed to wax pieces as diverse as gypsy jazz, ragtime, torch songs, rockabilly and, of course, the classic country evangelism for which he is best known, and that's just on a single album.

Summertime continues the direction Nelson has been going in for awhile: intimate, personal renditions of classic tunes with a small ensemble of Family members behind him. However, nothing is more powerful than when he sits at the mic with just his voice — drying and cracking but still as musical as ever — and Trigger, his nylon-stringed sidekick. The emotion of an American institution reaching the winter of his life but still in complete command of his heartbreaking skill is on full display. And for a moment Willie sounds as vibrant and vital as if he was back in the spring of his youth, when the Gershwins dominated popular song and Willie Hugh Nelson was just another songwriter, dreaming of becoming a legend. 'S wonderful. –Travis Buffkin

I know the "B word" is bad. I know, as a self-identifying male, that we're not supposed to say it. But, there is something divinely satisfying about hearing Clarence Reid (aka Blowfly) call Oprah a bitch before ruminating on Johnny Mathis being the owner of the biggest butthole that you'll ever see, before parodying Mathis' "Chances Are" with the lines "Chances are because you wear a silly grin/ the moment your two-inch dick comes into view ..." It's gold.

Pushing Through Darkness, the latest effort from San Anto/Donna, Texas/Seattle hip-hop trio Ghost Palace, is a brief (six songs, 19 minutes) but intense reflection on the pains of living in a fallen world. These are struggle rhymes, chiseled out of the stone of hardship, laced with the ghostly blossoms of alienation and desperation, and, thankfully, imbued with a hopeful slant that defiantly says: this is my life to live and my choices, along with their consequences, are mine to revel in or regret. "The Boy That Cried Wolf" and "Phantasmas" are particularly poignant tracks that deal with youth suicide and the death of elders in excruciatingly frank narrative form. The final track "Where Art Thou," with only one place left to go in this battle against death and emptiness, turns skyward as rapper Sergio "Evolve" Hernandez laments the absence of God's presence in his life, begging for a hopeful sign, for a gateway to a healing faith.