The Black and White Album
The Hives
(A&M/Octone)

It’s been said that the purpose of all art is to express the inexpressible; to convey something that can’t be easily defined. If that’s the case, then the music of the Hives may not be art. After all, pretty much their entire catalog can be summed up this way: “We kick ass, and you don’t.”

The Hives are hardly the first band in the annals of rock to be inspired by self-love, but they put more style and relentless conviction into their boasting than most. If we think of rock as being divided into the just-be-yourself school (Bruce Springsteen, Creedence Clearwater Revival, etc.) and the transform-yourself-into-a-comic-book-hero school (KISS, New York Dolls, Alice Cooper, the Ramones, etc.), the Hives unquestionably fall into the latter camp. They’ve even created a fictional svengali named Randy Fitzsimmons, who supposedly writes all their songs, but refuses to tour.

Howlin’ Pete Almqvist, the band’s singer, has a Boy Scout leer that recalls Malcom McDowell in A Clockwork Orange, and he knows how to bluster with panache. “Tick Tick Boom” sets the pace with its unstoppable, turbo-charged riff and Almqvist’s stylized condescension, and “You’ve Got It All ... Wrong” is a cleverly bitchy hookfest. Whether he’s addressing a musical competitor or a romantic rival (or both), Howlin’ Pete’s message is the same: “Never gonna pass me/’cause I’m out of your league.”

Musically, the Hives are anything but purists. As long as they’re smoking the rest of the field, they’re willing to stray from their trash-punk roots into Gang of Four funk (the Pharrell
Williams-produced “T.H.E.H.I.V.E.S.”) and electronic mood music (“A Stroll Through Hive
Manor Corridors”). With the jaunty “Well All Right!” they sound like The Strokes and appropriate Blur’s “woo-hoo” chant from “Song 2.” It may not be art, but most definitely it’s artfully contrived. 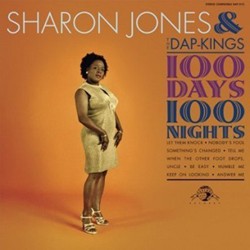 At a time when everything from our clothes to cat food comes from overseas, it’s hard to suppress the gorge impulse presented with such a divinely old-fashioned American delicacy as Sharon Jones & the Dap-Kings.

Jones, a soulful belter who once worked as a prison guard at Rikers Island, rekindles Stax’s decades-past glory with spirited funk culled from the greenhouse time forgot. More than simply a faithful recreation, the Dap-Kings inhabit the sound, taking you with them. It’s a vibe that travels from the warm, rounded production to bandleader Gabriel Roth’s spot-on compositions through Jones’ sassy verve.

Her irrepressible swagger keys the proceedings, recalling Etta James and the similarly rejuvenated Bettye LaVette. When she cries “you better get yourself a new one” (as in fool) on “Nobody’s Baby,” you’re tempted to take a step back. Her brassy presence provides the album’s stern center. “You’ve been tramping round this world, like you’re the only one in it,” she complains on “When The Other Foot Drops, Uncle,” warning “The lies that you’ve been spinning are running out of thread, and that crafty little pencil is running out of lead.”

But Jones is so much more than snap-worthy lines. The prior two discs shook it like they had something to prove, where 100 Days affords itself the emotional room of softer tones such as the Motown-ish “Let Them Knock,” or the stunning “Humble Me,” which channels Otis Redding as Jones begs, “Don’t let me forget who I am.” Even better is the haunting blues rave “Something’s Changed,” which slinks like Robert Cray’s “Smoking Gun,” as seen from the other side of the barrel.

100 Days is this band’s most appealing release to date, exchanging their sometimes frantic pulse for a more measured, assured quality that at only 10 songs and less than 40 minutes, almost inevitably leaves you wanting more.