Forth
The Verve
(On Your Own)

A decade after the Verve and an accompanying wave of Brit-pop acts washed the grunge off listeners who’d grown tired of wearing flannel despite the climate, they’re back with Forth and enough sing-it-in-your-sleep hooks to hock running shoes.

Forth is a lesson in contrasts – glossy production laced with gritty vocals, grandiose melodies disrupted by pensive lyrics (“love is noise, love is pain”) – with the greatest contrast being that between the tracks themselves. Space-age reverb and layers of free-form guitars aspire to Radiohead-like complexity on “Sit and Wonder,” while “Rather Be” plods along with a tinge of soul. The first single, radio-ready “Love Is Noise,” unravels across a repetitive vocal effect seemingly sampled from Simple Minds, making it infectious if not outright irritating.

The Verve crams the rest of the album with slow burners, reminiscent of lead singer Richard Ashcroft’s solo work and collaborations with Unkle, that never quite sizzle in the end.

Lester Bangs once referred to Teenage Jesus and other like-minded No New Yorkers as “saw-off-the-limb bands,” and this definitive compilation spanning the short careers of both TJJ and Lunch’s other project, Beirut Slump, prove the name still applies. Even three decades after no-wave broke, few modern noiseniks could better soundtrack an anaesthesia-less battlefield amputation. A few notes of Lydia Lunch’s pained whelp will have those prone to tinnitus scrambling for a bullet to bite. The cacophonous instrumental interludes (“Red Alert,” “Crown of Thorns,” the aptly named “Tornado Warnings”), actually offer brief breathers from Lunch’s abrasive vocals. Most frightening is Lunch’s other project, Beirut Slump, featuring vocals by Bobby Berkowitz, who claimed to crib the demented ramblings on the likes of “I Am the Lord Jesus” straight from the schizophrenic ravings of NYC’s street-dwellers. Leave this album on repeat, and you’ll fast join their ranks.

One way to measure a Randy Newman album is by how much it makes you squirm with discomfort. By that standard, Harps and Angels qualifies as his most important work since 1974’s Good Old Boys.

He scores political points with the contrarian country shuffle, “A Few Words in Defense of Our Country,” sarcastically suggesting that our current leadership isn’t so bad when compared to Hitler, Stalin, or King Leopold II of Belgium. At times, however, Newman sounds painfully out of touch, particularly on the strident “A Piece of the Pie,” which argues that America is going to hell in a hamper, and “no one gives a shit but Jackson Browne.” Thirty years ago, the joke might have been apt, but now it feels slightly bizarre.

Newman displays a surer touch with “Only a Girl,” the funny/sad tale of a rich 60-ish man hung up on a young girl: “Wears an orthopedic shoe/it’s some sort of uglification thing she’s into.”

Newman may not be that guy, but he knows that guy, and he’s probably the only songwriter alive who can get that story right. 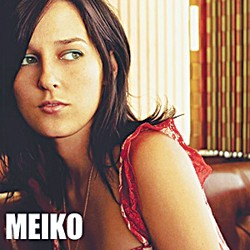 Meiko (pronounced mee-ko) proves that soulful pop does still exist. Originally premiering on her own indie label, Lucky Ear, and recently reprinted by MySpace Records/DGC, Meiko’s self-titled debut features sultry yet catchy ballads and her sometimes funny, sometimes somber lyrics about everything from heartache to Hawaii. Meiko’s beautiful, jazz-influenced alto (accompanied by Kate Nash’s lovely harmonies) sweetens tracks like “Heard It All Before” and “Boys With Girlfriends,” but Meiko steers away from sugary pop with lines like “one day we’ll get out of this shitty apartment,” which make her roots as a retired waitress very apparent. The emotional twists and turns of the album, its staccato guitar lines punctuated by occasional instrumental explosions, and her worldly lyrics of love and confusion are just a few of the many reasons to pick up this re-release.