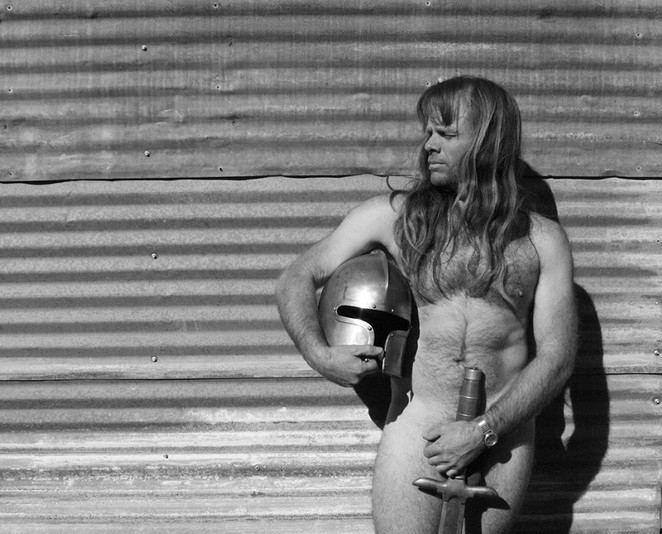 Burly, hairy and good with his hands, drummer Thor Harris is something like Ron Swanson for the arthouse, Moleskin crowd. When he’s not touring with Swans, Devendra Banhart or Amanda Palmer, Harris works as a plumber in Austin, living on a compound that looks like an inventor’s paradise or a clean freak’s nightmare. It’s a rare picture that captures Thor in a shirt.

In a pair of essays for Austin’s Monofonus Press — “How to Tour in a Band and Whatever" and “How to Live Like a King For Very Little” — Harris gives us a better understanding of his outlook. The adages include, “If you fart, claim it” and “If you had told me 15 years ago that Coca-Cola would put tap water in plastic bottles and motherfuckers would buy it … No fuckin' way.”

Harris performs on Friday at the Paper Tiger a percussion set inspired by 20th Century minimalists — Terry Riley, Steve Reich and the men and women who used steady pulses and repetition to change the vocabulary of classical music. Over the phone, I tried to eek out some details and a little more advice from the drummer

What is it about the minimalists that inspires your solo stuff?

I love the repetition of it, the fact that it's not about virtuosity. When I was a kid, I learned to be a super good drummer, a really fancy drummer. Then I noticed that was really boring to listen to, to listen to fancy musicians sort of showing off … I want to play [minimalist music] in rock clubs and see if that's refreshing to the rock audience ear.

I’ve heard that you wrote a letter to Michael Gira to join his bands Angels of Light and Swans. Do you think that is still a possibility for young musicians?

I really recommend it on every level, just writing letters to everyone you would want to play with. I certainly recommend it for young musicians. I try to encourage all of my older friends who are session musicians just to write to everyone they would want to play with. 'Cause bands do have personnel turnover. If the letter feels genuine, I think absolutely it could still work.

Is there some sort of balance between being a touring musician and working as a plumber while you’re in Austin?

There is a professional balance. The great thing about that is that a plumber and a carpenter, any kind of tradesman like that, it’s in such demand that you can be self-employed. Which makes it easy to go on and off of tour.