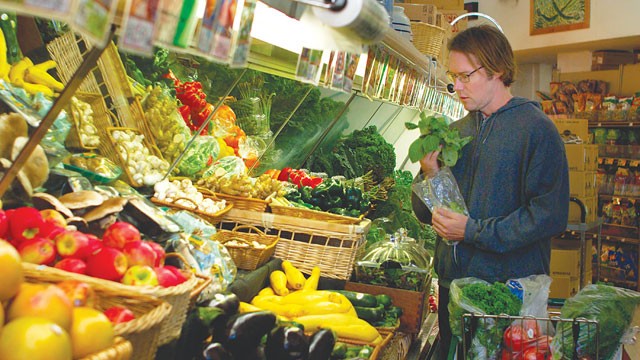 An aspiring poet has a dream to open up a mobile stand of organic, mostly vegetarian food at an Austin park. But when Bill (played by writer-director Paul Gordon in his first full-length film) applies for a loan is when the comedy starts — the loan officer only gives him $750 to start the business.

Regardless, Bill buys a used hot dog stand from a hot dog fanatic who obviously smells something overly healthy in the works. When Bill asks whether he can pay “in installments,” the man agrees, but days later pays Bill a visit to the park to remind him the first payment is due soon. “Good luck, selling this faggy stuff!” he says, realizing his prized hot dog stand is now filled with tofu, nuts, and eggless egg salad sandwiches.

Gordon’s deadpan timing as a nerdy idealist is perfect, and the veggie vs. meat eater stereotypes are dealt with intelligently (neither side is “right,” but they’re both funny). Meanwhile, the love story never falls into predicable terrain in this simple, unpretentiously well-written and acted light comedy that leaves a feel-good taste in your mouth.