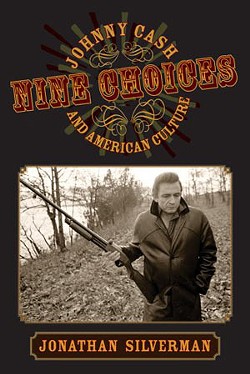 
Jonathan Silverman reads from his scholarly, yet accessible, cultural biography Nine Choices: Johnny Cash and American Culture. The recently released book analyzes the life of the man in black, often pegged as a beacon of authenticity among the music industry’s glitz. Silverman frames his work as an exploration of nine choices Cash made that defined his success: starting his career in Memphis rather than Nashville; moving from Sun records to Columbia in 1958; recording at Folsom and San Quentin prisons; marrying June Carter; denouncing U.S. involvement in Vietnam; filming TV’s The Johnny Cash Show; becoming an evangelical Christian; recording with rock ‘n’ roll producer Rick Rubin in the 1990s; and, finally, arranging for the posthumous Sotheby’s auction of his and Carter’s possessions before he passed away. Citing sources from the film High Fidelity to Joan Didion’s Slouching Toward Bethlehem, Silverman eloquently posits that Cash’s decisions reflect not just his own savvy marketing skills but also the American zeitgeist itself. Free, 5pm Sat, Nov 20, The Twig Bookshop, 200 E Grayson, (210) 826-6411, thetwig.indiebound.com. — Callie Enlow