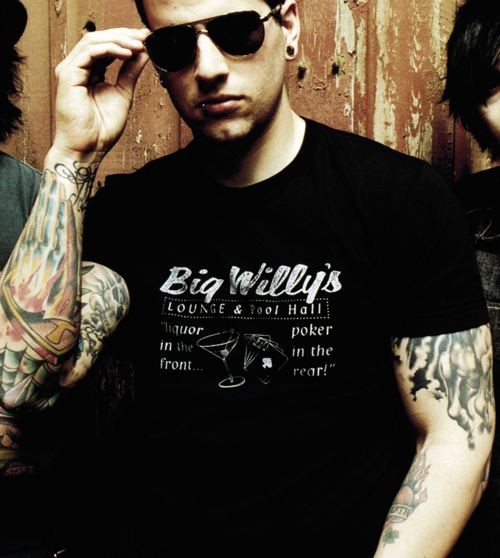 M. Shadows, singer for Avenged Sevenfold, spoke with the Current from Chicago. The band plays Sunday at AT&T Center with Deftones and Ghost B.C.

First of all, tell me everything about playing at Rock in Rio, in Brazil.

Oh, yeah. That’s one of those dreams young bands have: to play at Rock in Rio one day. We were lucky enough to play with Iron Maiden. I don’t usually get nervous for shows, but that was one that I really wanted to nail because I knew a lot of people would want to watch online and we have a strong fan base in Rio, so we wanted to kick ass that night.

Do you think Avenged Sevenfold suffered from the “successful band syndrome”? I mean, you seemed to be loved or at least respected by critics until you started selling some records

You can’t be everything at once. There’s always going to be small factions of people that are very vocal in their opinion of you when you’re not exactly what they want you to do. When we started as a very young band in the Orange County hardcore scene, as soon as we started separating ourselves from that, all those kids wouldn’t come to our shows. They hated us because we sang and were a little bit more melodic. But that happens. We were a cool band to watch at Warped Tour, but if you ask those kids now they’ll say, “No, Avenged Sevenfold is not a Warped band; they suck.” “They’re too big, corporate”. The bigger you get, you get that. So we just write the music we want to write, we go on tour, do the production we want to do, and we basically live in our own little bubble. We really don’t care what anyone says.

I’m a firm believer that people don’t know what they want until they get it. There are very few bands that I still listen to that write the same record over and over, one being AC/DC, and one being NOFX, they always do the same and I love them, but most other bands I fall out of love with because they do the same things but they no longer move me or challenge me. That’s what we want to do with our band: to move you in ways you didn’t necessarily think you wanted. You have to give people things that frighten them a little bit, throws them off but then they get into it. That’s how things evolve.

That philosophy of “giving people what they don’t know they want” couldn’t be more Steve Jobs. Do you use a Mac, by any chance?

The band achieved its biggest success after two tragedies: the death of your drummer (Jimmy “The Rev” Sullivan) in 2009, and the 2001 attempted suicide of bassist Justin Sane, who had to leave the band. You almost dissolved, yet decided to stay together.

It’s a testament to our fans. They stayed with us all through that. When Jimmy died it was very, very difficult. The reason we thought of disbanding wasn’t that we didn’t want to play music with each other, but we weren’t sure continuing with the name Avenged Sevenfold was right, considering how equal [Jimmy] was with us in creating it. Eventually we decided the best way to continue the legacy was to move forward. To me, it’s just all about how much you can keep your head out of what anyone else thinks of you and writing the songs you want to write and produce the records you want to record and putting it out there.

Is the screaming gone for good?

(pauses) I don’t know, you know? It’s one of those things, we don’t listen to bands that scream. I did when I was in high school and I kind of grew out of it. Maybe I’ll listen to one or two. I’d rather listen to the Iron Maidens and Metallicas of the world than the death metal bands. For me, it doesn’t make sense.

Tell me about your relationship with Mike Elizondo, who produced two albums in a row for the band after years of self-production.

We never found that sixth member we were looking for until we found Mike. We were open to bounce off ideas with different people, but we didn’t want to work with anybody. But Mike came with all these ideas and an ample knowledge of metal music. He knew absolutely everything about our band. He grew up basically on the slums of L.A. and all he ever did was play in progressive metal bands. His biggest influence is Keith Harris from Iron Maiden. We hit it off and started bouncing ideas. We concluded he could give something to the band and we could trust him. When Jimmy died he was with us all the time and we formed a friendship that is very valuable to this band. We did two records and hopefully we’ll continue.

Who is “the King” you talk about in the last album?

A guy who destroys everything to create an empire. Human history has always shown us people who worship at the feet of people who lead us. For us, that was a very intriguing thing, to get people to go to war for us. We’ve never gotten past the idea of all being equal, we always have someone leading us. So we just wrote a story with a Game of Thrones kind of vibe, 18th century, a crazy King who destroys his people. There really is no King, you can make it whoever you want it to be. It can be fame, God, or neither of those.

(interrupting) Absolutely not. I don’t believe in those things. (laughs) I try not to get into that because a lot of our fans are Christians and a lot aren’t. I have my own beliefs, but I don’t believe in any kind of religion that we have nowadays. But we’re definitely not a Christian band.

You haven’t played in San Antonio since 2008. We like to think of ourselves as a metal capital. How do you guys see us?

Absolutely, we love San Antonio. We’re not a hip band, hip bands go to Austin and do their thing

It’s kind of funny. (laughs) But for us, San Antonio is one of the metal capitals. All of Texas, Houston, Dallas, and even beyond, Arizona, New Mexico, there’s so many metalheads there. Everytime we play in SA is very intense, it has so much history

Ozzy and all that. We haven’t played there in a while and we’re very excited. We have a very nice production and people are going to get blown away by it. But I’m also excited about the Deftones and I hope people come in early, because Ghost [B.C.] is an amazing band.