B-Cycle Plans For Expansion With VIA Transit, City 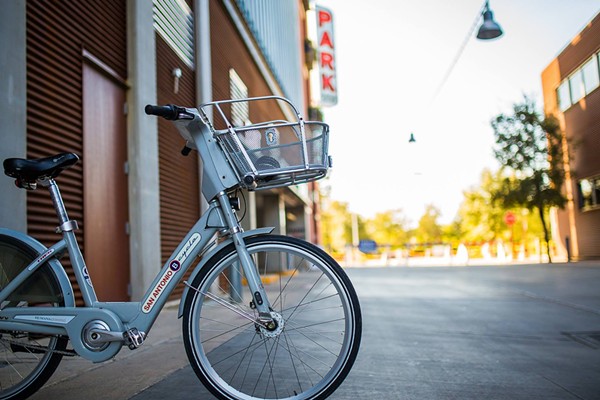 After nearly blowing a spoke earlier this year, B-Cycle San Antonio is getting set to expand — with a little help from its friends.

te July, VIA Metropolitan Transit's board of trustees voted to explore a partnership with the organization.

VIA's decision builds off momentum forged when San Antonio leaders announced a partnership with the San Antonio Bike Share board of directors in late May. That, in turn, came in reaction to long-time, unpaid executive director Cindi Snell announcing her resignation, citing the lack of a corporate sponsor and city funding.

San Antonio Bike Share is the nonprofit that locally operates B-Cycle. The city owns all the equipment.

While San Antonio committed to infusing $120,000 from hotel and energy efficiency taxes to hire a new executive director and to prepare for a sustainable expansion of the program, VIA Transit's role potentially could be much larger.

VIA is considering three partnership options: Taking over the administration and ownership of the bike-share program; becoming a "Title Sponsor," which would include increased annual financial commitment and representation on the board; or increasing funding contributions and continuing to coordinate system planning efforts between the transit agency and the bike-share program.

San Antonio B-Cycle plans to add 20 new stations with 200 new bikes through a $1.2 million grant from the Texas Department of Transportation. The organization nearly had to turn down the grant to stave off increased operating costs.

Jeffrey Arndt, VIA Transit President and CEO, told the San Antonio Current that the transit agency's 2016 budget will determine the road it will pedal along with B-Cycle.

But he wasn't ready to say which option VIA will take.

"I will say that we're all working," Arndt said. "The good news is everybody is working to the common goal and community good and I'm certain that VIA will have a place in the overall solution in sustaining B-Cycle."

If VIA Transit did take over day-to-day management, it would be the only transit authority in the United States to either own or operate a bike-share program.

What's for certain is that the solution will include the city and B-Cycle.

"So we'll all be players," Arndt said, noting that the budget process is underway, meaning the agency should have a decision by the end of September.

The transit agency's current relationship with San Antonio B-Cycle includes a map sponsorship and a "last-mile" travel option for VIA riders.

The city and San Antonio B-Cycle did not follow-up by deadline on multiple requests by the Current for interviews.

However, Douglas Melnik, San Antonio Chief Sustainability Officer and B-Cycle board member, did answer a few questions submitted to San Antonio's public affairs office as a last-ditch effort to get comment from the city for this article.

The first order of business is finding a new executive director. Melnik said the city and B-Cycle are conducting second-round interviews and should make a decision by the end of this month.

Snell will stay on through the transition, he clarified.

While the city is looking forward to working with VIA as it evaluates its interest in B-Cycle, Melnik said the bike-share program will "continue as the nonprofit that has the primary responsibility for operations."

As for the expansion, the new executive director will evaluate it as part of a business plan to be developed, Melnik said.

That person will report to Melnik and San Antonio Bike Share's board of directors.

While Arndt couldn't speak to the extent of what VIA Transit's role will be by the end of September — complete management or just increased funding — he did offer a glimpse into the planning process.

"VIA would play some role in advising as to where good spots for expanding that would integrate well with the system," he said.

That's because there's synergy between the organizations.

"VIA is primarily located in the urban core, where VIA's services are the richest. This is a great opportunity for integration," Arndt said. "There's a natural affinity. I think that everyone seems to agree that B-Cycle is an asset to the community."

One only need look to B-Cycle's budget to understand his point. Forty percent — the largest share — of B-Cycle riders are from San Antonio, based on zip code data from September 2012 through May 2015.

Nearly half of B-Cycle's revenue comes from memberships, which cost $80 a pop. Funding support makes up another 27 percent and sponsorship shores up the $787,219 budget by contributing 24 percent.

As soon as budget season concludes, B-Cycle enthusiasts in San Antonio will have a better picture of who will operate it and how the bike-share program will expand. But at least people know that B-Cycle won't be indefinitely out of commission because of flat tires and broken spokes.