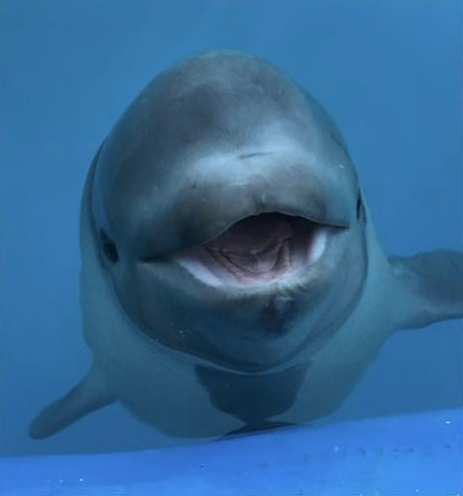 SeaWorld San Antonio will soon be home to an endangered Cook Inlet baby beluga whale named Tyonek, who will be transferred from Alaska to live in San Antonio permanently.

Tyonek was found stranded on Alaska's Cook Inlet mudflats in September 2017 when he was less than one month old. Initially, rescuers spotted Tyonek from a helicopter, and noticed no adult beluga whales were nearby. Tyonek, who was just a calf, appeared to have been stranded for several hours and was in weakened condition, and his young age was cause for concern, according to the National Oceanic and Atmospheric Administration (NOAA) . He was rescued and has been living in the Alaska SeaLife Center since.

In January NOAA deemed Tyonek "non-releasable," kicking off a search for a permanent home for him since he would not survive if he was released back into the wild. Researchers suspected his mother had either abandoned him or died, so reuniting him with her was "not an option."

Tyonek, who is a member of an endangered species, is “nutritionally and socially dependent, and lacks both survival and socialization skills needed to be successful on his own in the wild,” NOAA said.

NOAA ultimately selected SeaWorld San Antonio to permanently house Tyonek, since the park is already home to other beluga whales that could keep him company. The park offers a "Beluga Whale Swim Experience," in which guests guided by a trainer can swim and play with the beluga whales up close for 30 minutes at $125 per person. It's unclear if Tyonek will participate in this exhibit.

“Based on a thorough review of the applications, NOAA Fisheries selected SeaWorld San Antonio as the location best suited for Tyonek to thrive because they have both adult females and young male calves that will be important for Tyonek’s social development,” NOAA said in a statement.

“We are excited to welcome him to our family and provide the ongoing, specialized care he needs!” SeaWorld wrote in a Facebook post announcing Tyonek’s move to San Antonio.

Tyonek will be the second beluga calf to join SeaWorld San Antonio in the last year. In September 2017, a beluga whale named Crissy gave birth to a 125-pound baby in the park.

A date for Tyonek’s arrival has yet to been announced.