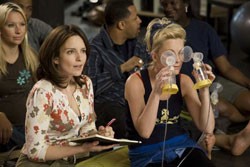 
Holy rusted metal, Steve Martin is funny again! I was starting to lose faith in humanity and the universe and 50-is-the-new-40 and all that other stuff you’re supposed to be able to depend on these days. If you can’t be an actor, a novelist, a New Yorker contributor, and hilarious, then you’re only half alive. Incidentally, that’s 50-percent more alive than Katie Holmes.

In Baby Mama, Martin plays the New Agey boss of Kate, a high-powered executive whose awesome-ass pumps are filled by Tina Fey, the renaissance entertainer who hasn’t let our funny bones down since she jumped the sinking ship that is Saturday Night Live. 30 Rock, the NBC show she now writes and produces, as well as acts in, has hit its stride in its second season, becoming without a doubt the most LOLing-est series on basic cable. (Let’s watch it and get “business drunk” together sometime, yeah? `“It’s like rich drunk; either way it’s legal to drive.”`)

Baby Mama was written by SNL alum Michael McCullers specifically for Fey and Amy Poehler, so if you’ve ever felt an affinity for Fey’s stock character — you know, that smart, in-charge, clumsily sexy woman who loves Star Wars and food — then don’t be surprised if the film feels like it was made for you. And when was the last time anybody did that for us? I’m charmed, frankly — as was a considerable slice of America, judging by last weekend’s box-office numbers.

So: Kate, 37, has just come out of The Mommy Closet, that place where so many professional women who’ve decided they can’t (or don’t want to) “have it all” live until whenever, if ever, they change their minds. (That is womanity’s prerogative, after all.) Yes, in stark contrast to last year’s crop of accidental-prego flicks, Baby Mama is about a wanted pregnancy.

Unfortunately, Kate’s T-shaped uterus prevents her from producing a child via artificial insemination, and even vice presidents of Whole-Foods-y grocery chains have to wait on very long lists to adopt — particularly if they’re single. Fed up with waiting, Kate enlists the help of a surrogate by way of the freakily fertile Sigourney Weaver (who’s not un-amusing herself, and on something of a winning streak with Mama, Be Kind Rewind, and The TV Set).

Enter rental gestator Angie (Poehler); or rather: Amy Poehler roundhouse-kicks her way onto the scene and fucking rules this movie as uterus-for-hire, Angie. Ahem … Ms. Poehler, currently of SNL, and the Upright Citizens Brigade (and lest we forget, wedded to G.O.B. Bluth), reminds us why we were so excited to see her in Baby Mama’s poster in the first place: She’s playful, uninhibited, and funny as shit. I’d put my baby inside her, too.