Allie Irvine, 37, has been homeless since Easter weekend of 2016. In her life, she has faced hardships such as drug abuse, self-harm, and being a victim of police brutality, she says. However, Irvine says she is blessed with the amount of care she has received from the many homeless and social services programs in the downtown San Antonio area.

One of them comes from an unlikely place.

In June, Back Unturned Brewing Co. began serving pizzas to the homeless community during lunch. Now known as the Easy as Pie program, the microbrewery offers homeless people a hot personal-sized pizza, along with a drink, five days a week — no questions asked. 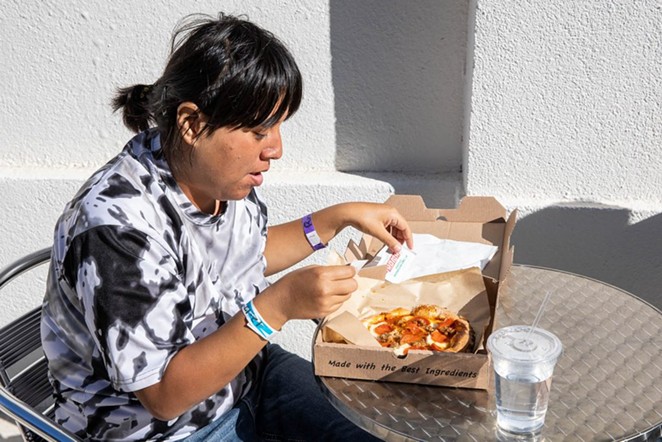 “I enjoy this program more than others because I enjoy coming here and it’s pleasant,” Irvine said.

Back Unturned Brewing Co., which opened November 2019 at 516 Brooklyn Ave., is known for its unique beer selection and brick-oven pizzas. Owner Ricardo Garcia gave the bar its name because he didn’t turn his back on his dream of starting his own brewery. But for his lunchtime regulars, the name may take on its own meaning.

“They are human, too,” Garcia said. “I just want to show them some love and give them something to eat.”

Before he started the Easy as Pie outreach program, Garcia’s views on the homeless aligned with the stigma many have toward the homeless community, and was a factor that steered him away at first.

“I had a very negative judgment against homeless people in the past, and questioned why can’t they just get jobs,” Garcia said.

When asked to elaborate on what changed his mind about the homeless, and what sparked him to create the program, Garcia said, “God just told me one day I had to change my views, and find a way to help them. I’m doing this program to just help the people.”

“I can’t judge someone on what they’ve been through and justify what is OK and what isn’t.” 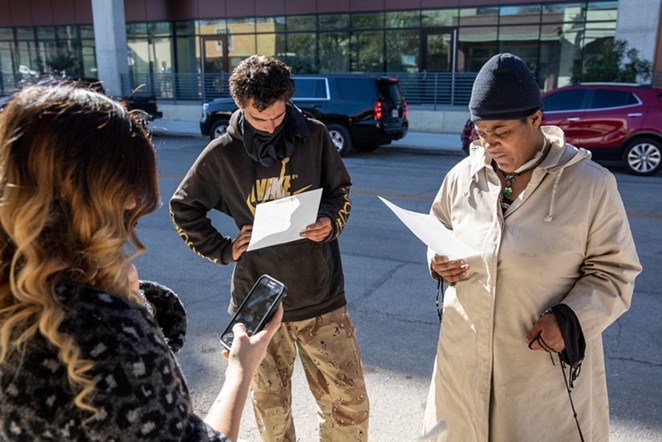 Elizabeth, 56, is one of many who are on the streets who appreciate what Garcia is doing for the homeless community.

“The pizza allows me to get in my protein and vegetables daily, while giving me nourishment to keep me well and give me energy for the day,” said Elizabeth, who declined to give her last name. “It’s truly cooking with love. The pizza feels like this is a healing work of food on your body and it’s blessed and done with love.”

Jay Taylor, 32, said the loving energy from Garcia and the Back Unturned staff transcends into other parts of his day.

“I hope this program waters the seed of love that they planted and it grows into a tree, and starts the cycle for the next group,” Taylor said.

The program operates 11 a.m.-2 p.m. Monday-Friday at the brewery that’s along the Museum Reach, and is available to the first 10 people. Individuals are allowed to enjoy their food outside, but people Garcia and the staff know can sit inside. There is no limit on the amount of times individuals can take advantage of the program.

Before the program, Garcia and his staff gave away free pizzas to his regulars from the homeless community during the initial development of the microbrewery. They were giving out 50 to 75 pizzas a week, but it caused his staff to be overworked and the business suffered financially.

This is what led to Garcia capping the amount of the pizzas offered to 10, so they could balance out their labor and expenses.

The microbrewery funds about 75%-80% of the program, while the rest are donations from customers. Customers learn about the program from signage on the front door, from tabletop displays that give additional info, or word of mouth.

If anyone is interested in donating to the program, the brewery has a QR code that you can scan to pay them via PayPal, but cash is also welcome. The funds will be used to potentially increase the amount of pizzas they can offer to people on a daily basis.

Garcia says he is exploring making the program into a nonprofit organization.

Back Unturned also created a donation bin inside the brewery for non-perishable food, and clothes and shoes for individuals in need. The public is welcome to donate items during the brewery’s operating hours of 11 a.m to 10 p.m. Sunday-Thursday and 11 a.m. to 11 p.m. Friday-Saturday. Recently, brewery held a winter blanket drive as the cold weather started kicking in.

“I understand how uncomfortable it can be helping a stranger,” Garcia said, adding that “at the end of the day, they are people, too.”

Rocky Garza Jr. is a freelance journalist in San Antonio. Follow him at @r0ckssss_ on Twitter. The San Antonio Heron is a nonprofit news organization dedicated to informing its readers about the changes to downtown and the surrounding communities.