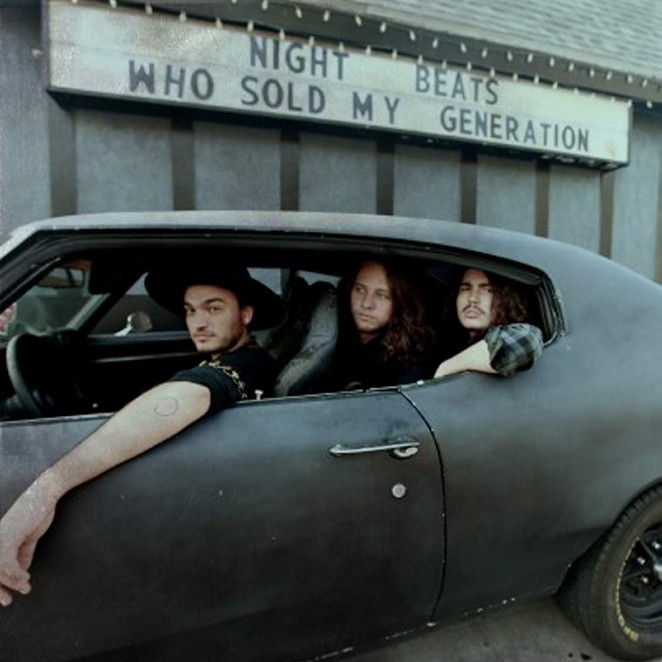 With the title of their new record, Seattle trio Night beats asks an important question: Who Stole My Generation? Was it American Apparel or Citizens United? Post-recession job prospects or the hours spent toiling away on Instagram? Could Bernie have stolen it back?

The generation has been a fertile concept for rock 'n' roll bands. From The Who to Richard Hell, songwriters (and music writers) like to get stoned and wonder about the meaning of this social construct. But Night Beats doesn't supply any new answers, or follow up questions, on this album. Instead, they tune in, toke up and drop out to the soundtrack of their parents' generation, the psychedelia of the '60s and early '70s.

On their sophomore go, Sonic Bloom, Night Beats attended the Nuggets school of psych, headed by Texas legend Roky Erickson. Awash in tremolo and acid made in the garage, the band dips into the heavy, wavy psych that took hold of Austin in the late '60s. Released on the capital's Reverberation Appreciation Society, Night Beats found an appropriate home for this captivating highway rock 'n' roll: the label has done everything in its power to promote psych in its home in South Texas.

But for this third effort, Night Beats graduates to the lesson plan of Jimi Hendrix. Guitarist and Texas native Lee Blackwell carves into his guitar with precision and emotion, tapping into the blues-based and prolific style of that god of American psych. Meanwhile, the rhythm section of Jakob Bowden and James Traeger drive forward like that black matte, Mad Max whip on the album cover.

That's all well and good, but this is a live band through and through. Last time I caught them in San Antonio, Blackwell was like a caged animal, pulling all hell out of his guitar and climbing onto the speaker and in the venue's low rafters. If you intend lose some sleep and some ear function on a weekday night, Night Beats — playing more under a spell than in the pocket — mark a great reason to do so. $15, 8pm, Thursday, July 8, Paper Tiger, 2410 N. St. Mary's St.