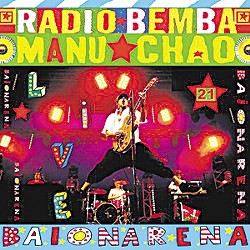 
Latin Grammys and sold-out tours aside, singer-guitarist Manu Chao is not quite a household name in most of the U.S. Yet he’s an international star, something this excellent live collection, taken from an inspired show in France, proves. Between the two CDs and single DVD here, Chao offers a little bit of everything. Highlights include the Clash-inspired radical rock of “Rainin’ in Paradize,” the Bad Brains-like schizophrenia of “Forzando Maquina/Mr. Bobby” and the full-on punk-rock assault of “Radio Bemba/El Dorado.”

Even if you’re not multilingual (Chao sings in French, Spanish, English, and Portuguese), you can still hear the urgency in Chao’s voice and the passion in the music. The DVD is culled from Chao’s colorful live performances in the U.S. and abroad. Because the footage is mundane, the behind-the-scenes material isn’t a great selling point. In fact, the group’s live energy comes across so well on the two CDs, the DVD feels disposable. — Jeff Niesel