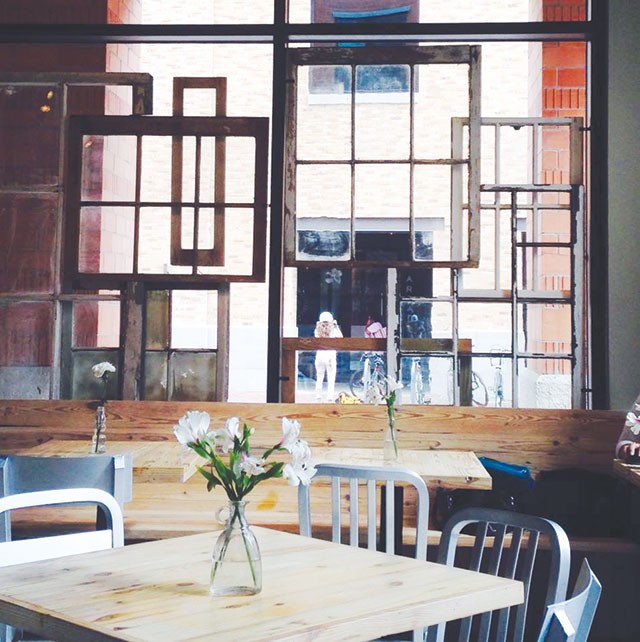 Our favorite bakery, and yours, if yearly Best of San Antonio polls are to be believed, moved into its bigger, Pearlier home last week. Bakery Lorraine, owned by partners Jeremy Mandrell, Anne Ng and entrepreneur Charlie Biedenharn, relocated from its original house-turned-bakery spot to a 2,400-square-foot space inside the Pearl complex at 306 Pearl Pkwy, Ste 110. The menu still includes the same awesome lineup of French macs, croissants and other flaky baked goods, but now includes made-to-order sandwiches, potpie, soups and more salads. The new space is decked out in local art and artist Vincent Valdez will stop by every week to draw portraits of bakery regulars and staff. In regards to what will become of the old location, we’re hearing the space could be turned into a donut shop and beer garden…but that would definitely mean I’m dreaming, right? We’ll keep you posted on that front. Opening hours for the shop, which seats 60, are 7 a.m. to 8 p.m. daily.

The next few weeks are chockablock with opportunities to eat and drink your faces off. The first comes via The Brooklynite, which celebrates its second anniversary this Saturday, October 11 at 9 p.m. with a special cocktail menu, guest bartenders from Arcade, Hot Joy, Blue Box and Austin’s No Va Kitchen & Bar.

Follow that up with Tim McDiarmid, of TimTheGirl Catering, who will host Canadian Thanksgiving along with chef John Russ (Lüke San Antonio Riverwalk) on the picturesque grounds of Peeler Farms in Floresville on Sunday, October 12 from 4 to 8 p.m. The evening will include drinks via Jeret Peña, desserts by Elise Broz (Biga on the Banks) and a portion of the proceeds will benefit the Raul Jimenez Thanksgiving Dinner. Get your $150 ticket at canadianthanksgiving.brownpapertickets.com.

Russ and Broz will keep busy with planning the next Alamo City Provisions dinner slated for October 19 from 6 to 9 p.m. at Landa Gardens (233 Bushnell). The event, put on by chefs via Mixtli, Restaurant Gwendolyn, The Cookhouse, et al, will feature five food stations, along with cocktail and beer stations with a fall harvest theme. Tickets ($80) are also available through brownpapertickets.com.

In food truck news, The Melting Point Food truck will celebrate its anniversary this Saturday, October 11 at the Point Park & Eats. The truck, which specializes in ooey, gooey grilled cheese sammies, is also in the running for mobile-cuisine.com’s 2014 Grilled Cheese Food Truck of the Year. Go vote for the only Texas truck on the ballot, and then celebrate with one of their cheesy creations. Polls close October 17.