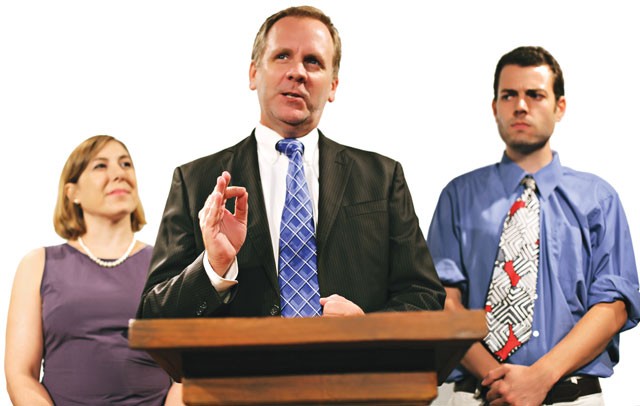 How has politics responded to the 24-hour news cycle? By running election campaigns non-stop, of course. Since the days of idealism back in 2008, we’ve all slunk into cynicism, but still consume the endless stream of sound bites and video clips like corn chips. But there’s a bright side to this sorry business: The worse things get, the closer the political parade comes to self-parody, with many opportunities for grim laughter. That is the challenge faced by James Venhaus’s new comedy, Ugly People, which opened August 19 at The Overtime Theater. The play imagines what the world would look like if political elections were run like game shows, with the real contestants being the marketers who push their political clients about like so much product in a video-scape managed by a press with the attention span of an ADHD eight-year-old. Directed by Kyle Gillette, the cast of a dozen includes Matthew Halteman as Rob Maxwell, a hapless waiter/actor, and Andrew Thornton as Scott Middleton, a well-intentioned community member. The two naifs are rather short on ideas, but take direction well, and so become prey to two political marketing teams that push their un-pedigreed ponies around the small tracks to improbably make the big race for president. Though the first act suffered from long development, there is an unexpected twist in the second act. During the final contest, the lights come up and the audience is encouraged to vote, the ballot helpfully included in the program. Audience participation is not often successfully encouraged, but what had been at times an almost unbearably slow journey through election, scandal, and just-like-on-TV skullduggery opened up at last to something I never would have expected — an opportunity for catharsis of sorts, and better yet, a real effect on the action. Extra ballots are available for purchase at $1 apiece, and this is no fraud. Venhaus has equipped the play with alternate endings, so maybe here at least your vote might really count.