Bar America gets a facelift 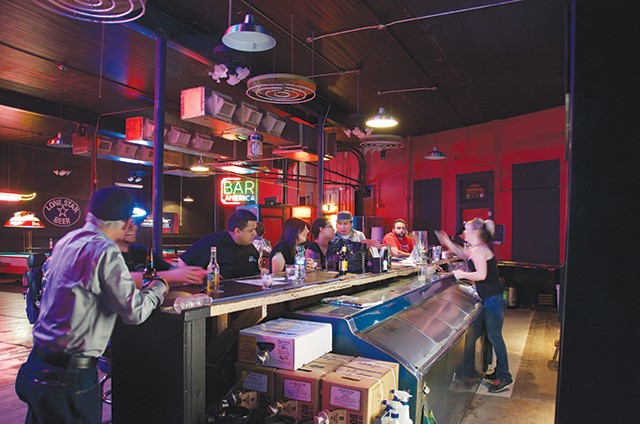 For any nay-sayers out there, Correa is one of the few people that should take over the joint without causing too much of a stir. The grandson of Martin Ramirez, Correa previously worked with his grandfather at the bar for about eight years, before working with his father Henry Correa at Cinderella Bakery on the West Side. He’s San Antonio born and bred.

When his grandfather, great aunt Angie and uncle Joe decided to sell the beloved watering hole known as one of the city’s best dives and the best jukebox, Correa stepped up to keep the bar in the family.

The 72-year-old establishment opened as Café America in 1942, turned into a bar in 1957 and still holds its original beer and alcohol license. But up until this April, Bar America had exclusively sold bottled and canned brews. Enter Correa, who’s added a small, quality lineup of top shelf booze among other upgrades, which include a new sound system, three large flat-screen TVs, a new paintjob and stalls in the ladies room that finally feature doors (those additions make for a tight squeeze and interesting restroom-going experience).

The bar is decidedly different inside—low-hanging ceilings were scrapped in favor of the building’s tall ceilings and the bar was gutted of any random crap left behind from Ramirez. They carry the Bar America classics at $3, and an almost equal number of Mexican favorites at $4 with the exception of a $3 Dos Equis bottle. Peckish? You’ll still find Sabritas-flavored peanuts and Lay’s chips to nosh on.

Correa’s also added a modest tap program with six rotating beers that, during our visit, included Bud Light, Dos Equis, Model Especial, Woodchuck Amber and, for the craft beer fans, Karbach’s Hopadillo and Saint Arnold’s Lawnmower. While nothing’s over $4, plastic-carrying patrons will be happy to know there’s no need to take cash out of the in-house ATM anymore—Bar America now accepts debit and credit cards.

The crowd during a recent visit was a mild one—blame the Spurs’ Game Two loss to the Mavs. My $5 Jack and Coke was nice and loaded; my friend’s $2 Hopadillo (a welcome special) was hoppy and delicious. Young 20-somethings mingled alongside a handful of 60-year-olds over Lone Star tallboys.

For better or worse, Bar America is still very much so a dive, and yes, you’ll still find the old jukebox, a favorite in the Current’s annual Best of San Antonio polls. For now, the precious relic sits next to its replacement, a fancy-schmancy internet jukebox that Correa brought into the bar. Fans of nostalgia can enjoy free plays on the old jukebox from 6 to 9 p.m. and still blast Selena tunes.

For Correa to succeed at keeping Bar America open for another 30 years, at which point he’ll turn 61, he’ll have to keep the spirit of the bar intact by welcoming young and old with open arms. So far, he’s doing just fine.