Bar Industry Wears Love of Craft on their Sleeve, Literally 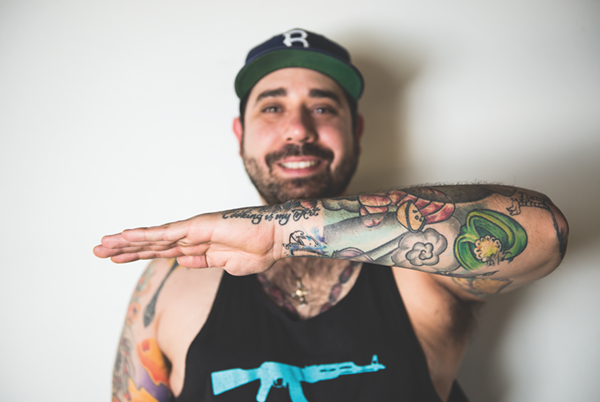 It’s hard not to gaze and/or gawk at most craft bartenders as they muddle, shake and stir their way through cocktails. But if you stare long enough, you’ll start to find small mementos of their time spent behind the well. The hospitality industry, it seems, has a penchant for food and booze themed ink and most will share the inspiration for their body art.

Javier Treviño, who owns Food Whore and Joe Cupps, has dedicated the past three years to decorating his left arm and part of his chest with food items. To honor his time in L.A., the San Antonio native has a fish taco (“I lived off these while there,” he said) and a bottle of wine. The arm includes several veggies, including his latest work, a shaker tin and jigger.

Bexar Pub’s Javi Gutierrez also shares a similar bar tool on his left arm. The 6-year-old piece spans his forearm and is a cheeky wink to bartending. “We were joking around, and ended up coming up with jigga what, jigga who and landed at jigga please.”

It’s usually bar banter that gets the ink conversation flowing. Jake Corney, general manager at Jazz, TX, for example, committed to his first tattoo after a few cocktails. “We were all drinking and laughed about it, but then Liz and Gil Morales (club investors) were there and they agreed to set something up,” Corney said. Fast-forward to January 30 when seven more staffers, including architect Jonathan Card and Corney, visited Firme Copias to figuratively brand themselves with Jazz’s logo.

“If we get older and something happens and we end up hating Jazz, TX, it’s still a Texas sunset and a tuning fork,” Corney said, “but even then, we have to think about all the goodness that’s come out of it so far. It’s already a big part of our lives.”

Karah Carmack, a former bartender and current spirits specialist for distributor Favorite Brands, shares the same tattoo as 100 other mixologists who have volunteered their time preparing juices and syrups for the San Antonio Cocktail Conference — with a slight edit.

The team, which she’s managed since 2016, varies by year, eats sponsored lunches and dinners while preparing said juices. As Carmack put it, tacos were often the sponsorship of choice, which led to inside jokes on taco fatigue and a nickname, “Team Taco.”

“A bunch of people got really bad tattoos of tacos, they look like Taco Bell right out of the wrapper,” Carmack joked.

Carmack, the team's leader, visited her go-to artist, Carlos Gonzalez of Doomsday Tattoos, for her Team Taco tat, complete with tiny a crown.